The Indian cricketer is just two years older than his doppelganger, but they look uncannily similar.

Ishant Sharma, currently is the most experienced Indian bowler in the squad. He has played 61 Tests and 75 ODIs and has taken 187 and 106 wickets respectively. In 2011, Ishant became the fifth youngest cricketer to grab 100 wickets. During India tour of England 2014,

Ishant’s inspiring seven wicket haul at Lord’s, helped the visitors win a Test at the venue after 28 long years.

On the right is Anirudh Ravichander. He is the nephew of Latha Rajinikanth, wife of popular actor and icon Rajinikanth. Anirudh made his debut as a music director in the Tamil film ‘3’. He composed the song “Why This Kolaveri Di”, which was sung by popular actor Dhanush. The song went viral on YouTube, and till date the official video has garnered more than 88 million views.

The Indian cricketer is just two years older than his doppelganger, but they look uncannily similar. 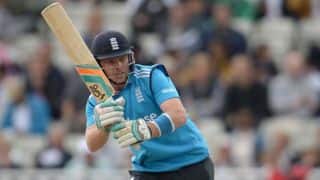