Ishant Sharma is supposed to the lead the Indian pace attack, but does not want to take up the challenge.

Seldom blowing hot, and often blowing cold. Ishant Sharma is supposed to the lead the Indian pace attack, but does not want to take up the challenge. Nevertheless, the world perceives the 60-Tests senior bowler as the spearhead of the Indian attack. Devarchit Varma dwells into the much-debated topic of the somewhat morbid state of Indian fast bowling attack, and explains why Ishant embodies this state perfectly.

He is only trying. But Ishant does not want to. After relentless persistence from his captain he accedes. Ishant, who has looked ineffective so far in the day, suddenly transforms into a monster who sends shivers down the spine of the opponents — who have not yet recovered from a nightmare they lived few months ago, and they surrender without any gumption. India win a Test at Lord’s after 28 years. Ishant Sharma is their hero.

But wait, did we just say hero? Ishant Sharma, a hero? Are we calling the same bowler who was ridiculed for costing India a match they had in their grip — by giving away 30 runs in six balls — a hero?

We do not yet know (this should come as a surprise, given his experience) whether Ishant is a hero or a ridiculed-yet-lovable young lad at 26 or the leader of the pace attack or just another experienced bowler who can share a thing or two with the less experienced. What we do know is that the manner in which his career has panned out tells the state the Indian bowling has been and continues to be.

Who is Ishant Sharma?

A lanky pacer, Ishant first received a call-up in the national side when he was 18 against Bangladesh. But that is just data. Ishant Sharma had Ricky Ponting struggling in his own backyard — perhaps the highest point for a 19-year-old just pulled out of education and thrown into international cricket — bowling to one of the batting legends and getting him out.

Teams from the Indian subcontinent have seldom exploited bowling conditions to a great extent overseas. Ishant, with all seriousness, has given Indians a reason to dream — to see one of their bowlers turning into a tearaway pacer.

What does Ishant Sharma do?

Ishant Sharma bowls. He bowls, bowls and bowls. And he keeps doing that. Day in and day out. Match after match. Like a bowling machine. Like a clerk in a government office who does not have to put his heart into the work of putting stamps on files and passing them onto the next table. He is there in the office, everyday, and leaves unnoticed.

Ishant would play relentlessly; he would play without changing the plan; He seldom creates an impact; and he does not scare the opposition — not anymore. Once in a while, of course, he would bowl an unplayable delivery. He would have one coming his way if he is fortunate.

Unfortunately, there is no guarantee when the special delivery will be unleashed. It may not be seen for matches on a trot — maybe for an entire season. But Ishant Sharma bowls. And he continues to bowl. Like a perfectionist, he would stick to a line — a line outside the off-stump which batsmen would usually not attack or score runs off — but a line that would not threaten their existence either. And Ishant continues to bowl. After all, he is India’s most experienced bowler after Zaheer Khan.

What does Ishant Sharma think of himself?

Tours follow tours, roaming all over the world, Ishant looks more like a ‘container’ (in the longest format), not a bowler who would actually do something. He looks like a bowler who would scare the opposition. In reality Ishant wouldn’t even stare at them. He would just bowl, that line outside the off-stump, and at the end of his follow-through, he would wipe his sweat and look at the harmless delivery being left alone and land into the big gloves behind the batsman.

What does the world think of Ishant Sharma?

The fans ridicule him. They do not spare him. As soon as Ishant, the 12th man, came out will with drinks during Tendulkar’s 200th Test, Wankhede mock-chanted, ‘Iiiiiii-shaaaant…. Iiiii-shant!’ in the same manner they had been chanting for the Little Master.

They do not care. They do not care about their bowlers. They will rip him apart on social media; they would WhatsApp Ishant Sharma jokes; fortunately, Ishant remains safe from their wrath to the extent that they never got so enraged with him that they attack his home with stones in the middle of the night.

Ishant’s captain is a huge believer of ‘efforts’ and ‘processes’. ‘Pitching in the right areas’ is the success mantra for him — a mantra that more often does not deliver. Yet the think-tank refuses to change their strategy. Ishant continues to bowl. Ishant would play football in training sessions, as if all the homework is done. He would then turn up next day being the same bowler that he was yesterday. Fans will ridicule him; his captain will continue to lay emphasis on processes and giving the 100 per cent. And like a bowling machine, Ishant will continue to bowl.

The critics have almost given up on him — not because they have said all they had to, but because Indian bowling has gone awry in general. It is not only Ishant who fails these days. Indian fast bowlers deliver on random days, like at Lord’s, like that ‘unplayable’ Ishant Sharma delivery. No one would predict the date or time. And Ishant and India continue to bowl. In the channel outside off.

What is the reality?

Ishant is perhaps the victim of a faulty system. He is a young man lost in the system without a plan to nurture bowlers. He hails from a country where batsmen are worshipped. He is a part of a system that is not effective, and on many occasions it falls apart even before the start of a match. India continues to bowl those line and length in Tests that can contain the batsmen, not attack.

Power and wealth are the first two words that come across someone’s mind when he thinks Indian cricket; unfortunately they are yet to devise a plan that would get them 20 wickets in a Test. Neither has there been a coach — foreign or domestic — who would work relentlessly to create plans and ensure the right execution, who would shake the system up and make it realise that the team cannot win Test matches unless the bowlers can take 20 wickets.

On dustbowls at home Indians wipe out batsmen with spinners; even part-timers look more than threatening. The think-tank gives the feeling that the fast bowlers are only meant to take the shine off the ball so that the spinners, the real stars, can run through. Fast bowlers are the support system in home matches. Yet, they are the ones who take the blame for team’s failures.

Ishant is probably wrong not to take up the leadership role of the fast bowling attack. He may actually be wise — to not let all the criticism come to his men and himself in defeats and end up copping the flak. It is, after all, typical of Indian culture to put the blame on the bowlers in losses and worship the batsmen in wins.

Maybe, at 26, deep inside, Ishant is just inexperienced and naïve as any young batsman of his age. But if a culture continues to support only batsmen, bowlers are probably destined to go round in circles and India will continue to lose series after series. It will also be completely unfair to blame those who haven’t got the right system to nurture, grow and excel. 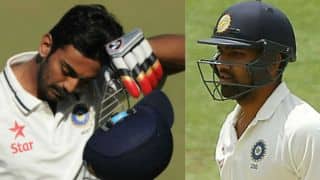