Ishant Sharma, born on September 2, 1988, is currently India’s pace-bowling spearhead. Jaideep Vaidya goes through the career of the lanky Delhi lad who was once compared to Javagal Srinath and Curtly Ambrose. 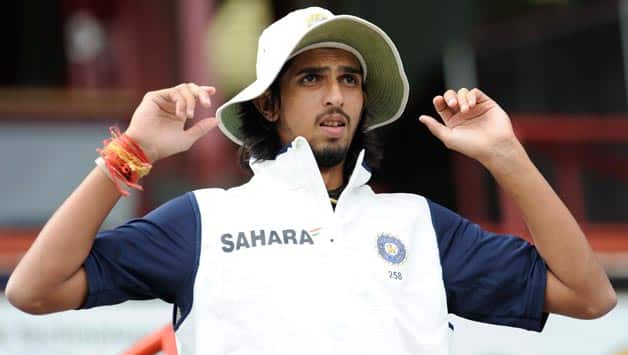 Ishant Sharma, born on September 2, 1988, is currently India’s pace-bowling spearhead. Jaideep Vaidya goes through the career of the lanky Delhi lad who was once compared to Javagal Srinath and Curtly Ambrose.
It’s the last 30 minutes before the lunch break on Day Four. Australia have negotiated a nippy and tricky first session without any academic damage, reaching 117 for two from their overnight score of 65. However, the psychological impact on skipper Ricky Ponting is evident from his twitchiness while batting and flustered look on his face otherwise. The new guy, Ishant Sharma, has troubled Australia’s best batsman with his pace, bounce and movement for the last hour or so. His 193 centimetres of height, coupled with a rhythmic high-arm action and wrist movement have helped him extract the most out of the conditions. The off-cutters that jagged back into the right-handed Ponting have struck him on various body parts, with the others just missing flesh or willow. Ponting is clearly uncomfortable against the gangly 19-year-old; and the Indians know it only too well.

After a gripping seven-over spell of Test cricket on a lively WACA wicket, Ishant is just trudging back to the outfield to take his fielding position when his Delhi teammate and skipper Virender Sehwag summons him over to a conference with Indian captain Anil Kumble. “Ponting strike par hai. Usko ek aur over do (Ponting is on strike. Give him one more over),” Sehwag is heard telling Kumble, a conversation that the stump microphone picked up clearly. Sehwag knows only too well that Ishant loves bowling long spells in domestic cricket, and the fact that he had troubled Ponting was clearly a sign that something is waiting to happen. Kumble, with a degree of certainty, turns to Ishant and asks, “Ek aur over karega (Will you bowl one more over)?” Sharma, clearly itching to have another go at Ponting, replies, “Haan, karoonga (Yes, I will).”

What happened on the first ball of Ishant’s eighth straight over is the moment that etched his name in the Indian cricketing folklore. Ponting looked to fend Ishant’s full-length delivery, which he expected to nip back in as had been the routine, close to the body. However, the ball maintained its line, clipped his edge and flew straight into Rahul Dravid‘s safe hands in the slips. An elated Ishant screamed in joy as his teammates gheraoed him; it was the perfect setup — one that would forever create a doubt in Ponting’s usually impregnable mind and banish him to the status of being Ishant’s bunny for the rest of his playing career. His number had been passed on from Harbhajan Singh to a beanpole called Ishant Sharma.

Australia eventually lost the match — their first defeat at Perth to a team from the sub-continent — by 72 runs and Ponting was convinced that Ishant was the reason behind it. “I will always reckon that if I could have got through just one more over in our second innings, then we might still have won,” Ponting wrote in his ‘Captain’s Diary 2008’. “Tall, lean, ultra-impressive Ishant Sharma, playing just his fourth Test and still eight-and-a-half months short of his 20th birthday, had bowled an awesome spell to me: seven overs when he was fast, aggressive and relentless, where I never felt as if I was truly ‘in’.”

And to think, Ishant wouldn’t even have been in Australia had S Sreesanth and Munaf Patel not been injured. Ishant had been summoned for the preceding Sydney Test to replace the injured Zaheer Khan, but remained wicket-less in what was a Test match remembered for reasons other than the cricket played. But Ishant tried his best to ensure that the Indians wiped off all the bitter memories from Sydney at Perth by announcing himself to the world in just his second international tour. At 19, the world was his to conquer.

Ishant’s first tryst with Team India had come in May 2007 when he was selected in the Test squad for a tour to Bangladesh, as a replacement for the injured Munaf. After beginning his cricket quite late in his childhood, Ishant had progressed really quickly through the domestic setup, playing for Delhi, and eventually coming under national reckoning when he was just 18. On debut, Ishant bowled just 13 overs over two innings. Later that year, he was picked again to fill up voids left by injured pacemen during Pakistan’s tour of India. This time, he toiled hard on flat decks and picked up a fifer in only his second Test to lock his place in the side.

Then came the famous, or infamous depending on the lens you look at it from, tour of Australia in the summer of 2007-08 which was Ishant’s breakthrough series. Everyone Down Under was gushing over the lanky Indian fast bowler with wavy long hair who had tormented Ponting and helped, as the Times of India’s headline had proudly stated, knock the Aussies “off their Perth” and brought them crashing back to earth. When the Australians came to India for a return tour the following winter, Ishant won his first Man of the Series award with 15 wickets in four Test matches, including that of Ponting thrice. Ishant was the future of Indian bowling. With his gangly frame (it wasn’t long before he came to be known as lambu among his teammates) and high-arm action, the bounce he could generate even on the flattest of pitches was something Indians had never witnessed from one of their own. Add to that his pace — he used to regularly touch and cross the 150kph mark — and ability to cut the ball into the right-hander and you had yourself a genuine wicket-taking pace bowler, always targeting the corridor of uncertainty. Barely 20, the comparisons with Indian and foreign greats such as Javagal Srinath and Curtly Ambrose had already begun.

Perhaps it was the pressure of all the expectations; perhaps it was the inability of the Indian setup to handle fast bowlers; perhaps it was his own over-eagerness to improve his bowling; perhaps it was because he could never really reproduce that spell, but Ishant’s career went on a downward slide post 2008. He lost his pace, which slid to below the 140kph mark, and, more importantly, his rhythm. Due to this, his advantage which was his ability to derive so much out of his hit-the-deck style soon withered away. Ishant would later admit that he tried to emulate his senior Zaheer Khan’s bowling style in order to generate more swing — a rookie mistake which went back and bit him hard. And just like that, within a few months, it seemed that Ishant would soon enter the scrap heap of Indian pacers who lost their pace after entering the international setup.

Fortunately for Ishant, he came under the wings of Eric Simons, who was appointed as India’s fast bowling coach in 2010. Simons corrected Ishant’s wrongs and helped him get some of his earlier qualities back. Soon, the pace was back in the 140s, but Ishant was never the same bowler that he was in 2008. Many people blamed it on his playing too much limited-overs cricket, including the Indian Premier League (IPL), and advised him to concentrate on his Test career. But Ishant always believed that he could prosper in all three formats. Others always expected him to reproduce that spell each time he took the ball in his hand.

Under Simons, Ishant fought his way back into the first XI and soon went on to become India’s No 2 fast bowler after Zaheer in the longer format. In October 2010, Ishant was back to torment his favourite opponents, Australia, but this time with willow rather than leather in hand. Ishant stuck around with VVS Laxman for a ninth-wicket partnership of 81 runs, himself scoring 31, and played a vital role in India winning a thrilling Test by one wicket. In 2011, Ishant toured the West Indies for a three-Test and five-ODI series as part of a young squad with several senior players rested. He didn’t do too well in the two one-dayers that he played, but went on to take three wickets in either innings of the first Test. In the second Test, he claimed his 100th career wicket, thereby becoming the fifth youngest bowler ever, aged 22, to achieve the milestone. He ended up as the leading wicket-taker in the Test series with 22 wickets at 16.86. He was rightly adjudged the Man of the Series. Ishant was part of the Indian team that lost eight back-to-back away Tests in England and Australia in 2011-12, and relinquished their world No 1 ranking. Against England, Ishant could manage 11 wickets at an average upwards of 60. When Ishant toured Australia four years after his magical breakthrough, he was not even a shadow of his former self as he could take just five wickets in four Test matches. Needless to say, he could not reproduce that spell. In March 2012, he underwent surgery on his ankle which had been troubling him for over a year. He made a comeback into the Test squad when England came touring in the winter of 2012-13, but did not impress. In spite of that, Zaheer’s miserable loss in form post the World Cup meant that Ishant soon became India’s pace spearhead.

In the IPL 2013, he conceded the most runs in one match by any bowler in the IPL history (66 runs in four overs) playing for the Sunrisers Hyderabad. He kept his place in the ICC Champions Trophy 2013 squad and was part of the team that clinched the title. His bowling in the death overs in the final against England, where he took two wickets in the 18th over, played a crucial role in India winning the match.

As things currently stand, Ishant has taken 144 wickets in 51 Tests, but at an expensive average of nearly 38. In ODIs, he has 94 wickets in 65 matches. Almost six years into his international career, perhaps he hasn’t quite reached the levels that were expected of him. But the good thing is that, at 25, he still has age on his side. The next five years would be instrumental in shaping the curve of Ishant’s career. Currently the most senior bowler in India’s young setup, the onus is on Ishant to be the role model and lead the young bowlers forward. Perhaps a déjà vu of that once-in-a-lifetime spell is a bit unfair to expect from him, but Indian fans will surely hope he gets his pace and rhythm back sooner than later.