Ishant Sharma, once touted as India’s next big fast-bowler, has been a huge disappointment and his performance in the third One-Day International (ODI) against Australia at Mohali has intensified calls for his axing. Nishad Pai Vaidya revisits Ishant’s shambolic over at the death and recalls Chetan Sharma’s fateful over against Pakistan in 1986. The statistics also reflect Ishant’s struggle as a one-day bowler. 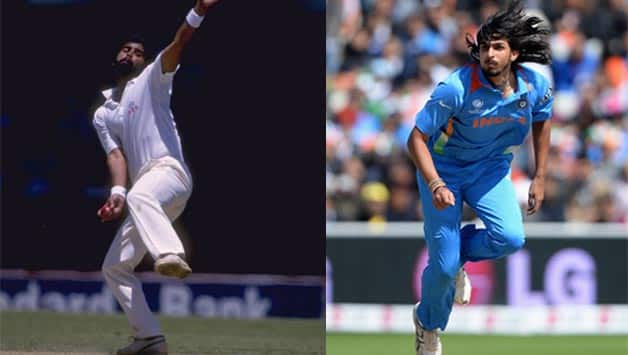 If it was Chetan Sharma’s (left) last ball to Javed Miandad which proved costly for India in 1986 at Sharjah, on Saturday it was Ishant Sharma’s 30-run over that paved way for an Australian win © Getty Images

Ishant Sharma, once touted as India’s next big fast-bowler, has been a huge disappointment and his performance in the third One-Day International (ODI) against Australia at Mohali has intensified calls for his axing. Nishad Pai Vaidya revisits Ishant’s shambolic over at the death and recalls Chetan Sharma’s fateful over against Pakistan in 1986. The statistics also reflect Ishant’s struggle as a one-day bowler.

In great attempts it is glorious even to fail — Vince Lombardi

It’s doubtful if Mahendra Singh Dhoni would buy the words of one of the greatest coaches in America’s National Football League (NFL). After crafting an innings of exquisite brilliance to extricate his team from the depths of despair to what looked like a match-winning score till almost the very end, Dhoni saw his epic efforts being negated in a single over of utter rubbish by a consistently inconsistent Ishant Sharma.  Needing 44 off 18 balls with four wickets in hand, Australia were still behind the eight ball until Ishant conceded a whopping 30 runs to allow the tourists a peak at victory.

It wasn’t so much about the number of runs Ishant bled in that over, but the manner in which he conceded them. Ishant did not have variations and kept banging it on a length, allowing James Faulkner to free his arms. It was an unacceptable performance from someone who is the senior-most bowler in terms of experience in this attack.

Living in the age of social media, one can instantly gauge the pulse of the nation. The spontaneous outpouring of the nation’s anger and disappointment on Twitter and Facebook revived memories of Chetan Sharma’s fateful delivery to Javed Miandad during the Austral-Asia Cup 1986 final. Pakistan needed four to win off the last ball and Chetan delivered a full toss which was carted by Miandad over mid-wicket for a maximum. That delivery scarred Sharma for the rest of his life; it continues to be a blot in Indian cricket history. Although he scored an ODI ton batting at No 4 and also became the first Indian to take a hat-trick, most people remember him for that fateful delivery as it came against the arch-rivals.  Ishant’s abominable over is certain to haunt him for the rest of his life.

While Ishant’s shoddy performance wasn’t against Pakistan, the ignominy of the setting is unmistakable. The match was in India’s hands and Ishant gift-wrapped it and presented it to Australia. Chetan bore the brunt of one ill-executed delivery.

On his day, Ishant looks unplayable. The ball bounces awkwardly and the subtle movements leave the batsman in trouble. However, such glorious days have been few and far in between. In his first 22 One-Day Internationals (ODIs), Ishant had shown great promise as the batsmen had problems adjusting to him. Since then, his graph has been downward in the format, which doesn’t speak well for someone who has been around the international circuit for six years now.

Here is the relevant break-up of his numbers:

Ishant hasn’t picked up a four-wicket haul since January 2009. He was also out of the 2011 World Cup squad as the selectors picked him mainly for the Test matches. As one can see, his economy rate has gone a touch higher and his average has increased by nearly five notches. He has had a few good spells such as the one against Sri Lanka during the ICC Champions Trophy 2013 semi-final this year. However, he has the tendency to deliver that one bad ball every over, something that proves costly. Luck has favoured him a few times such as the Champions Trophy final where he picked two wickets after conceding many in an over. Then, there was that Delhi ODI against Pakistan where Mohammad Hafeez smashed him around the park before being caught at mid-wicket to hand India a narrow win. How much can fortune cover-up for a bowler’s weakness?

While Ishant was decent during the Champions Trophy and the subsequent tri-series in the Caribbean, it has all gone awry during the ongoing series against Australia. His figures are appalling to say the least:

Ishant has taken only two wickets in three matches and has conceded 189 runs at 7.87 per over. Those are shocking figure for someone of his ability. Before he bowled that terrible 48th over, his figures read a decent 7-1-33-1. All that changed during the Faulkner assault. But, it wasn’t so much about the batting as it was about poor bowling.

Where does Ishant go from here? He certainly doesn’t inspire confidence. And it’s not mere numbers. He simply does not show the variations needed to hit back. When the selectors meet to pick the side for the next few ODIs, Ishant may be shown the door. That may be the logical conclusion.

Turn your clocks back to Perth 2008. A young man with long locks battled with one of the greats of the modern era. The legend was flummoxed. In the end, the youngster outsmarted the master in a battle of attrition. He was hailed as the next big thing for Indian fast bowling. Tall, pacy and the ability to move it subtly, Ishant was the package the nation was searching for. Four years down the line, not only has he disappointed, but his credentials have also taken a hit. By now, he should have firmly established himself as India’s leader in all formats — taking over the mantle from Zaheer Khan. Sadly, he has not repaid the undue faith the selectors have showed in him.

Can numbers capture the drama and intensity of Test cricket?