Ishant Sharma grabbed his 150th Test wicket during the second Test at Durban.

Ishant Sharma took his 150th wicket during the first Test against New Zealand at Auckland. Nishad Pai Vaidya examines a few stats that reveal the two facets of the enigma.

Ishant Sharma, one of India’s “strike-bowlers” has completed 150 Test wickets during the game against New Zealand at Durban. It has taken Ishant 53 Test matches to get to the mark and it is slow for someone who has been India’s frontline option for over five years. While this is a milestone, there is hardly a reason to rejoice as Ishant’s career still seems to be work in progress as he is yet to touch the consistency that is expected from him.

For his 150 wickets, Ishant averages a high 38.71. In fact, for bowlers with over 150 wickets, Ishant has the second highest average. Compatriot Ravi Shastri leads the list with an average of 40.96. However, one must bring into perspective the fact that Ishant is a frontline option, but Shastri became more of a batsman as his career progressed. That reflects how inconsistent Ishant has been since coming onto the scene.

When on song, he can be a handful, something we witnessed during the morning session on Day One at Auckland. The steep bounce and subtle movement off the seam has batsmen in trouble. However, when he doesn’t find his rhythm, his length gets shorter and wider of the stumps.

Here are the stats of the bowlers with more than 150 wickets and averages on the higher side:

There is one statistical detail that does however draw a much clearer picture on Ishant’s value to the team. His record in Tests won by India is good:

For Indian seamers, Ishant is the third-best in terms of wickets taken in victories (excluding those against Zimbabwe and Bangladesh). He leads the charts along with Zaheer Khan and Kapil Dev:

Now, we come to the other side of the coin. Ishant has struggled whenever India have been under the pump. Here is his record in defeats:

In 16 matches on the losing side, Ishant has taken only 25 wickets and has got them at an average of 79.72. Thus, whenever India have struggled, particularly during the tours to England and Australia in 2011-12, Ishant has also failed to maintain consistency. For example, there were six overseas Tests where he took only six wickets.

Thus, looking at these numbers, one wonders what could have gone wrong after all the promise he showed on that historic day at Perth in 2008. It is just that he has had his phases of brilliance, followed by the phases of mediocrity. There are two details that would typify that phenomenon. During the tour to the West Indies in 2011, he took 22 wickets in three Test matches to spark hopes of a brilliant recovery. However, from August 2011 to March 2013, he took only 17 wickets in 13 Tests. How could a bowler touch the two extremes in such a short span of time? It is a question only Ishant can answer and the best thing he can do is perform.

Zaheer Khan had a similar career path as he had taken only 134 in his first 45 matches at an average of 36.10. However, that changed in 2006-07 during his second coming. Ishant can take heart from his senior partner’s transformation. 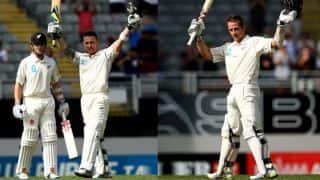