The break seems to have served Ishant extremely well. He has undoubtedly emerged as the leader of the Indian pace attack.

All of a sudden, Ishant Sharma is spitting fire. From an efficient, tireless bowling machine he has transformed into a menace that looks petrifying to say the least. Ishant, who would earlier stare hopelessly into absolutely nothing after delivering harmless deliveries, is now ‘in your face’ for the batsmen. He has turned sharp, aggressive, and dangerous. Ishant has helped India find their lost mojo, ending the shame of not winning an overseas series (though the win against Sri Lanka has come in the subcontinent). He finally looks the spearhead of the attack, willing to take responsibilities, stepping into the shoes of Zaheer Khan. But the question is: How long will Ishant carry on like this? ALSO READ: Ishant Sharma embodies present state of Indian bowling attack

Ishant has come a long way from the lanky pacer who tamed the lion in Ricky Ponting in his den in 2008. He has played 65 Tests and has an experience of playing international cricket for 8 years. When he had barged into the scene, Ishant was fresh, precocious, enthusiastic and a hope for the future. But when Zaheer Khan fizzled out after India’s win in the ICC Cricket World Cup 2011, Ishant was the one who was looked up to with all hopes pinned on him. Unfortunately, he refused to step up. He refused to be heralded as the ‘leader’ of the Indian pace attack. That was certainly disheartening for the Indian fans. ALSO READ: 10 facts you need to know about Ishant Sharma

Since 2011 India have been to Australia and England twice each, and have also toured West Indies, South Africa, New Zealand, and even Bangladesh. Ishant played in all these tours, but generally remained a mere participant. Barring the West Indies series, the Lord’s Test in 2014 proved to be a one-off affair: Ishant and India failed to make most of the opportunity. He did not create much difference since that historic win: India lost everywhere. But when a ‘young’ Team India under Virat Kohli travelled to Sri Lanka, little did the world know what would transpire.

The first spell on the first day of the series at Galle set the tone for Ishant. Coming off a long injury layoff he made a subcontinent track resemble an Australian or South African counterpart. He always had the pace and bounce, but on that day he bowled a line and length that batsmen had no answer to. The Indian fans and experts would struggle to recall of Ishant had bowled with the same venom ever in the past — of course taking out that spell to Ponting. Unfortunately, the fourth and most relevant column of his bowling figures do not reflect the impact.

The break seems to have served Ishant extremely well. He has undoubtedly emerged as the leader of the Indian pace attack. He has bowled consistently well in the last three Tests; Ishant’s emergence would surely make South Africans think twice over their plans when they come over.

It is a shame that Ishant will not be there in the first Test of the recently-christened Gandhi-Mandela Series in November. International Cricket Council (ICC) has banned Ishant from India’s next Test and the team would surely miss him when they would want to set the tone early in the four-Test affair.

“An angry fast bowler is a captain’s delight,” Kohli said after India’s 117-run win at SSC against Sri Lanka. Indeed, fast bowlers turn into monsters when they are angry. Dale Steyn and Mitchell Johnson become unplayable when they get into that zone. Let us see how far Ishant goes.

Kohli may be delighted with Ishant’s performance, his verbal barrages and the one-on-one duals against the Sri Lankans, but the fast bowler’s real tests will be outside the subcontinent, in England or South Africa or Australia or New Zealand, when India will need this Ishant. 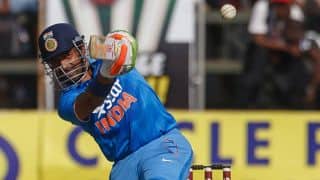 Ravichandran Ashwin and others with four Man of the Series awards