Australia have produced excellent wicket-keepers with a flair for batting over the last three decades. Rodney Marsh, Ian Healy, Adam Gilchrist and Brad Haddin are fine examples of that. 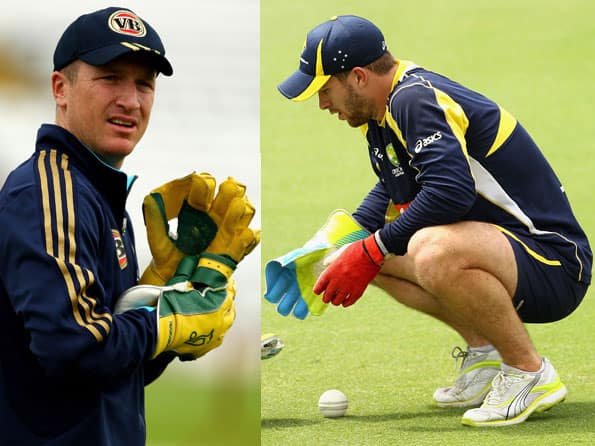 Australia have produced excellent wicket-keepers with a flair for batting over the last three decades. Rodney Marsh, Ian Healy, Adam Gilchrist and Brad Haddin are fine examples of that. As this current Australian side goes through a transition phase in their quest to regain its supremacy in all forms of cricket, certain changes seem inevitable. With Matthew Wade playing his part to perfection in both departments of the game in the Commonwealth Bank (CB) Series, one can’t help but get the feeling that Brad Haddin’s One-Day International (ODI) career may soon hit a roadblock considering the latter’s lean patch in recent times.

Though Australia made mincemeat of India during the Test series, Haddin was the only player who looked out of sorts for the major part of the tournament. The Australian selectors made the right call by including Wade for the limited-overs format and the faith seems to be paying rich dividends currently as Wade has made the most of his opportunity with four half-centuries – one in the Twenty20 against India and three in the CB series. With his composed demeanour and approach, he has looked extremely comfortable on the big stage.

Wade started the CB series on admirable note. In the rain-affected ODI against India, Wade opened the batting and scored a brave 67, but his innings was overshadowed by David Hussey’s late blitzkrieg that eventually took away the game from India.
A few games later, at Brisbane against the same opposition, Wade was part of a solid opening partnership with David Warner in which he scored 45. That foundation helped Australia post 288 on the board and India fell short by 110 runs.
At Sydney, Wade came in at No 6 helped himself to yet another half-century. Wade’s presence in the team gives captain Michael Clarke the option of using him as a floater in the batting order.
In the first final against Sri Lanka, Wade went back to his position at the top of the order and complemented Warner’s majestic 163 by scoring 64. The spotlight hasn’t solely been on Wade yet.

It won’t be surprising if Wade becomes Australia’s first-choice wicket-keeper after such praiseworthy performances.Australia’s chairman of selectors John Inverarity, too, stated that if Wade did well in the CB series, he could possibly usurp Haddin’s place in Tests as well. There is no doubt now that Wade has thrown his hat in the ring and will compete for a spot in the Australian Test squad. He has already been named as Australia’s primary wicket-keeper for the limited-overs fixture against the West Indies. This gives him leverage over Haddin, as the Tests in the Caribbean are slated to begin after the ODIs.

Haddin’s performances have been below par during recent times. His career average of 31.38 in ODIs is decent for a batsman who comes in late and as a result has not many balls to face; but it’s still nothing to boast about.
Since the last one year, Haddin has played 15 ODIs and scored just 348 runs at a paltry average of 26.76. In Tests, too, Haddin has scored 352 runs from 17 innings at an average of 23.46, which is way below his career average of 35.82. The signs became ominous for Haddin thereafter, and when he was ‘rested’ for the first three games of the CB series, Haddin had realised that making a comeback was going to be a humungous task. This was reflected in his words when he said, “You give another guy an opportunity to take your spot and you’ve got to look if they do well, you could find it hard to get back in the team. But that’s the way it is and I’ve just got to deal with that and make sure I’m ready to play.”

This situation is not new for Australia. Ian Healy had to make way for Adam Gilchrist under similar circumstances. It is now time for Haddin to make way for the young Wade. However, Wade should consider himself lucky. The fact that Haddin will be present to guide him during the tour of West Indies augurs well for the young lad. He has a golden opportunity to become a permanent fixture in Australia’s Test squad. Only time will tell if he can go on to replicate the success of his predecessors.

As for Haddin, his ODI career appears to be swiftly heading towards twilight. Only an injury to Wade can provide him with an opening in the limited-overs format. Also, he will have to battle hard to retain his place in the Test squad, as the selectors may not be very patient with him if Wade continues to perform well.

(If cricket is a religion and has many devotees, Karthik Parimal would be a primary worshipper. This 23-year-old graduate student, pursuing his Masters in Engineering, could be an appropriate example of how the layers of what inspires, motivates and keeps one happy run deeply in our daily lives. He, unlike others, is not too disappointed about not making it big by playing for the country, but believes that he plays the sport every day with his heart by watching and writing on it)