After winning the first T20 game against South Africa, Australia lost the second on Sunday. It was a game they should have won after South Africa, chasing 148, were 84 for seven. Three points stand out for Australia following Sunday’s defeat: 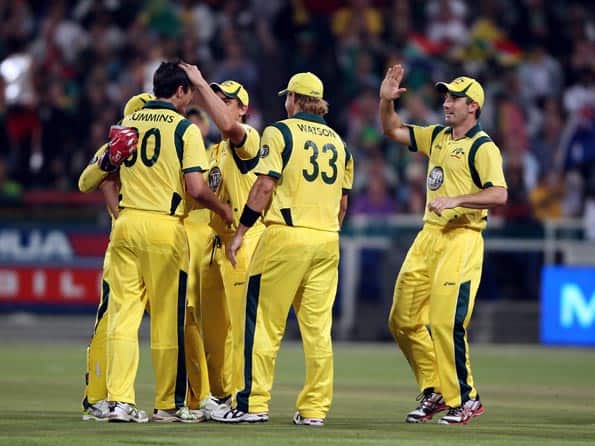 Though Australia seemed to have unearthed a couple of individual talents in the series, they have quite some way to cover in becoming a force at T20 © Getty Images

After winning the first T20 game against South Africa, Australia lost the second on Sunday. It was a game they should have won after South Africa, chasing 148, were 84 for seven.

1. After winning the first T20 International game ever in 2005, the team proceeded to comprehensively lose the very next game by 100 runs. In the 11 years since, Australia has neither formulated a stable game plan nor have they formed a winning culture which they had in the other two formats.

2. Much as they would deny it, the ghosts of the 2006 ODI in Johannesburg still remain and comes back to haunt them from time to time, when they play South Africa. It was a game where Australia scored 434 batting first and incredibly lost a near-certain winning cause.

3. Shane Watson is central to their fortunes in all the formats of the game. When it comes to limited-overs, it is his bowling that stands as a differentiator between the teams

At the toss, Australian captain Cameron White was asked if it was individual or team effort that counted in the T20 games. “In this format, individuals can win you the match in a ball or two. When it boils down to tight situations, it is the team effort that counts, whatever that means,” he replied. Though it sounded confusing, the words held a lot of value after Juan Theron hit the winning six for South Africa.

It was Theron’s arrival at the crease that heralded big shots. Once Theron got the confidence going, Parnell too joined in the fun as he took apart Stephen O’Keefe.

Lonwabo Tsotsobe started the match in the best possible way for South Africa by tying down David Warner. Warner would have realised that form counts for nothing. He came into this series with two consecutive centuries behind him, but failed to get off the mark in both the games. Law of averages was probably working against him.

Till Parnell came on to bowl, Australia found it tough to force the ball of the square and their run-rate was a pathetic 3.4 runs/over at the end of the fifth over. It was Shaun Marsh who started to get things moving as he flicked one to the fine-leg boundary and cut one over covers for a six. He found the going tough against Johan Botha as he was not given the room to go inside out and the pace did not allow him to adjust late. He compensated for that by feasting on Parnell again as he drove one past covers and then played a beautiful lofted drive.

That aggression was not to be sustained as Marsh was dismissed by Theron. Once Hussey was dismissed, Australia’s initial gameplan of keeping the wickets and attacking towards the end failed. With the dismissals of Steven Smith and White, it seemed that Australia would be at least 80 runs short of the par 200 suggested by the curator.

T20 is a game of momentum and debutant Mitchell Marsh ensured that it was in Australia’s hands going into the break. The way he dealt with Parnell and Morkel was refreshing. He picked their lengths early and was in position for every shot that he hit. The 35 runs of these final two overs could have made a lot of difference in the final analysis.

Theron and Parnell ensured that going into the final overs they would eclipse the hard- hitting efforts of Marsh. It was an error of judgment by White that he did not have either Doug Bollinger or James Pattinson to bowl one of the final four overs. That those two overs were to be bowled by either of the two spinners or Marsh made the task easier for the South Africans.

Once they attacked O’Keefe, the shoulders started to droop which was evident in Patrick Cummins bowling the wides in the penultimate over and the frenetic field changes by White. It was here that Watson’s absence was felt the most. Had he been in the team, it was him who would have bowled at the death.

South Africa have headaches of their own as in the absence of Jacques Kallis and AB de Villiers, the middle order is virtually non-existent. Though Tsotsobe showed the way to bowl, Parnell could not quite grasp it as he went wide or short most of the time. Morkel had a good time on the field till the final over when he was taken to the task by Mitchell Marsh.

In the absence of Watson, Theron finally found his groove and got back to his parsimonious ways at the death. Even Hashim Amla erred in sending Botha up the order. Though Botha and David Miller seemed to have the chase in control, they both fell to ambitious strokes at crucial junctures of the match. If not for the partnership between Parnell and Theron, it would be them having all the round table meetings heading into the ODI series.

Though Australia seemed to have unearthed a couple of individual talents in the series, they have quite some way to cover in becoming a force at T20.

(An Australian fan at sports, Venkat Raghav loves cricket and tennis equally. He puts his biased thoughts into writing once in a while at raghavmv.wordpress.com)