Adapting to the situation and playing accordingly may seem like a quite straightforward plan, it is easier said than done. Vihari reveals why it is always about the mind at this level.

It took Hanuma Vihari four full seasons of domestic cricket to make his Duleep Trophy debut and nearly nine seasons and close to 5000 First Class runs to make his international debut. Playing the waiting game sure is nothing new for the 25-year-old.

But, that prolonged toil in the domestic circuit has now made things easier for Vihari, so he says.

“I will say that it makes the job easier playing international cricket, once you have worked hard at the domestic level,” Vihari tells CricketCountry, fresh off his successful tour of West Indies with the national team.

ALSO READ: For me, every Test match is my last, went into West Indies tour with a clean slate: Hanuma Vihari

“Because you face so many situations, experience so many situations, different kinds of pressure. That way, I was fortunate enough to play so many years in domestic, before making international debut. So that experience really helps; once you get 5000 runs in domestic cricket, you know what you have to do if you face a similar situation at the international level,” says Vihari who was the highest run-getter in the series with 289 runs at an average of 96.33.

With his stellar showing in the Caribbean, Vihari has more or less sealed India’s No.6 slot for himself in Tests. Vihari has demonstrated exceedingly well, his ability to adapt in his three overseas tour so far, something he believes is the key to success at this level.

“The challenges (on the three tours) have been different, conditions have been different and each one poses a different challenge,” he says. “For me, I have got better with every game and I feel the six games I have played so far – from debut to last game – I have personally felt like I have evolved as a cricketer.

“There are some tactical changes you do during the game, according to the pitch, the bowler. We have to be tactful about it and sometimes it happens instinctively, sometimes after you have analysed the bowler (and his strategy). There is no major change with my technique, but things change as per the situation. I look for things which may help my game, and I do do that.”

While adapting to the situation and playing accordingly may seem like a quite straightforward plan, it is easier said than done – even for the best. Probing more on that point, Vihari reveals it’s more about the mind at this level.

“Firstly, it comes in the mind. If you train your mind that you have to play according to the situation no matter what, the skills will take over; that’s what I feel,” elaborates Vihari. “At this level, you have the skills, it is the mindset that has to be be tuned well and you have to have the right mindset. Personally, I keep the team goals ahead of my personal ones – that makes it a lot easier for me, tuning my mind and reading the situation for the team, rather than focus on my personal milestone.”

During the West Indies series, Vihari spent the most time in the middle with Ajinkya Rahane, amassing 338 partnership runs across two Tests. Rahane was the second-highest run-getter of the series (271) and batting with him was an opportunity for Vihari to learn.

“He is an excellent player and has played 50 plus games for India and as you said he was under a little bit of pressure (before the series). But the way he handled it and the way he was calm in the middle – especially in the first innings of the first Test, that set the tone for us. We were struggling early on and he came in a build a good partnership, that set the tone for the whole series, I am sure that he is satisfied with his effort to help the team win an important tour overseas.

“Especially in the first Test, second innings, I was looking to accelerate, and at that point in time he told me to choose the ball you want to hit and that kind of stuff. We were talking a lot, communicating a lot. No.5 and No.6 are such positions that you bat together often. So we want to build a good rapport, and keep performing the same way as we did in the West Indies,” he says.

Vihari now is looking forward for the home season, which interestingly, starts in his home ground of Visakhapatnam with the first Test against South Africa, beginning October 2.

“I have not set any targets as such. I am playing in my hometown, in Vizag, the first game for South Africa Tests. I’m really excited and hopefully fans will come out in large numbers to show their support,” Vihari says. 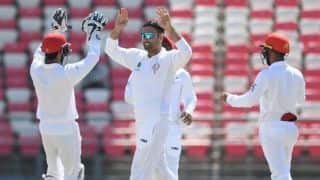