Arun Kumar believes Uthappa is ready for a comeback into the Indian team.

Congrats on the win. It was long due, wasn’t it?

It was due for 14 years. We were entering the knockouts but getting a little tense. We were thinking too much about winning and, in turn, putting undue pressure on ourselves. We took it easy this time. We treated the final like any other game. Also, the team was a lot more confident this year. We had those outright wins and just wanted to continue the good work. We were not thinking about taking the first-innings lead. The victory was very well deserved. Most of the people in the country believe we are one of the strongest teams around. We played with a sense of togetherness and everybody contributed.

Karnataka have some players who could soon be playing for the country. How ready are they?

Hopefully the selectors recognise this. They actually played against some of the best attacks in the country — Mumbai, Punjab, Uttar Pradesh, Maharashtra. We beat Punjab twice, actually. Only good batsmen can do well against them. CM Gautam is the most successful wicketkeeper this year. He has 43 victims. He is ready [for the big league]. Robin Uthappa is ready for a comeback. Abhimanyu Mithun has picked up 41 wickets. Karun Nair has done well. Manish Pandey and Lokesh Rahul also can be looked at.

Yes, it was an all-round team performance. The batsmen did their job; the fast bowlers and spinners did their job and the catching was brilliant this year. Overall, ours was the best fielding side in the country. Manish Pandey took some fantastic catches. So did Nair and Rahul. Our catchers complemented the bowlers. Besides, [leg-spinner] Shreyas Gopal took 22 wickets. We tried him against Mumbai and he took wickets right away. We were actually missing a wickettaking spinner and Shreyas filled that gap. We had spinners who were keeping it tight but unable to penetrate or spin the ball much. Shreyas flights the ball: he is probably the only spinner who flights the ball in the country at the moment. He gets purchase, gets a lot of turn and that has helped a lot.

The last time Karnataka won the title, you played a prominent role as an opener. This time, you are the coach. How do look at both the wins?

I got a century in the second innings of that final (1998-99). Even here, we had to chase. Well, 90 per cent of the teams would prefer to play quiet and not take chances. I have always believed that there is always pressure when you are playing slowly. Counter-attacking is important. Our batsmen went and straight away attacked so that Maharashtra could not attack us at all. Even in the league stage, we ran into a situation when we had to chase batting fourth. Our batsmen batted positively instead of hanging around and leaving the ball too much. Traditional pressure is when you have three slips and two gullies. When you play your strokes, you won’t have that sort of field. You can convert the four-day field to a one-day field if you bat positively. Once you have a one-day field, you are under no pressure. That was the mindset and that’s what we did. We were very particular about being positive in the second innings when chasing.

Anil Kumble’s group decided to have a batting and bowling coach [and not a head coach]. Actually, it has been nice. Mansur [Ali Khan] and I have are old mates. We were not strictly batting and bowling coaches. But we knew our departments. We were free enough in the sense I let Mansur talk to the batsmen and he let me talk to the bowlers. Our camaraderie was pretty good. But when it came to certain things, we did not interfere in each other’s job. We were more like two coaches in the team. I would not say it was right or wrong but the boys enjoyed themselves. Maybe we being young coaches, they got along well with us. Team bonding was important and we were not like dictators. We understood the boys, what their needs were and improvised. Making them feel comfortable and taking off the pressure was our main job.

How has R Vinay Kumar been as captain?

His captaincy has been a major reason for the victory. Vinay [Kumar] is one of the most involved guys around. He is very passionate about the game. The way he fields as a bowler, he is one of the best fielders among bowlers in the country. He is one of the best thinkers of the game. Vinay Kumar and I got along pretty well. I used to play cricket the same way. I was very passionate about my game. I am lucky to have him as captain. For any coach in the country, it is important to have a good captain. He does the job on the field. Once he steps onto the field, I do not have to bother about him. 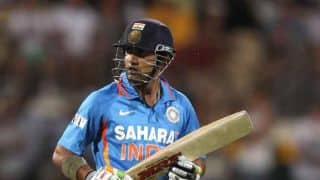