Jack Berry Hobbs was one of the greatest batsmen the game has seen. He continued playing First-Class cricket almost till the age of 52 and piled up several batting records.

Born December 16, 1882, John Berry Hobbs was one of the greatest batsmen the game has seen. He continued playing First-Class cricket almost till the age of 52 and piled up several batting records. We present you with 10 Jack Hobbs’ records that stand the test of time.

Hobbs retired with 197 First-Class hundreds (as per Wisden), but most cricket statisticians include two more that came during his stint with Vizzy’s side in 1930-31. Both Hobbs and Sutcliffe were in the side, and the matches were given First-Class status in retrospect. Even without them, Hobbs is way ahead of Hendren (170), the next name on the list.

In addition to these 199 hundreds, Hobbs had also scored 273 fifties in First-Class cricket, which took his tally of fifty-plus scores to 472. Once again, this is a world record. Once again, Hendren (445) is the next name on the list.

Hobbs finished with Test numbers of 5,410 runs at 56.94 with 15 hundreds. These are phenomenal numbers, given that the run-feast in Test cricket started in the 1930s, almost after he retired. At the time of retirement he was almost 2,000 runs ahead of Clem Hill, the next name on the list.

6. Most hundreds after forty

In terms of hundreds after 40, too, Hobbs leads the way with 8. In fact, he is so ahead that he has scored double the next name on the list — Misbah (4). Hendren, Warwick Armstrong, Graveney, and Hendren have 3 each.

7. Most runs at an overseas venue

Hobbs was the first batsman to score a thousand runs at a venue away from home: his 1,178 runs at MCG came at 69.29. This is followed by Don Bradman’s 963 at Headingley. If one includes neutral venues, Younis Khan has 1,024 runs at Dubai.

It is well-known that Hobbs and Herbert Sutcliffe formed probably the greatest opening stands in history. The numbers tell the story: from 38 partnerships Hobbs and Sutcliffe had put up 3,249 runs at 87.81 — easily the record for any opening pair with over 3,000 runs between them. Their tally of 15 century stands is next to only 16 shared by Gordon Greenidge and Desmond Haynes, who averaged 47.31 per stand — a shade above just half of Hobbs and Sutcliffe. Greenidge and Haynes were also the second pair to put up 250-run stands twice — almost six decades after Hobbs and Sutcliffe. 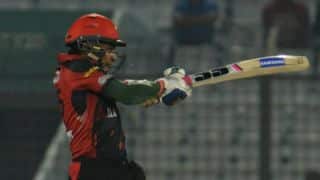