Jahangir Khan was the perfect foil to Mohammad Nissar and Amar Singh. He also killed a sparrow during a cricket match.

Jahangir Khan, ace all-rounder in the nascent stages of India in Test cricket, was born February 1, 1910. Abhishek Mukherjee looks at a man who once killed a sparrow during a cricket match.

When cricket historians go gaga about India’s initial first two tours of England, they typically mention Mohammad Nissar and Amar Singh. Dr Jahangir Khan, albeit not in the same league, but without doubt a quality all-rounder, is often overlooked.

Jahangir was, to put things in short, huge. His imposing frame stood out among the Indian team; when Nissar, Amar and Jahangir walked out together, they did not look out of place in a group of the local Englishmen; everyone could make out who the fast bowlers in the side were.

He was not express, but he was often deceptively quick. He bowled “from an economical approach with a side-on action and somewhat slinging delivery which allowed him to vary his pace and at times produce an unexpected quicker ball,” wrote Wisden of Jahangir. The other aspect of Jahangir’s that stood out significantly was his stamina and nagging accuracy that made him the perfect foil to the faster bowlers.

One must not forget that Jahangir was also a more than handy batsman who could hit the ball really hard. His numbers at First-Class level — 3,327 runs at 22.32 with 4 hundreds — are those befitting a bowling all-rounder. With ball he had picked up 328 wickets at 25.34 with 12 five-fors and 2 ten-fors.

As if these were not sufficient to prove his skills as an all-rounder, Jahangir held the national (one must remember here that India was undivided then) record for javelin throw and represented India in the British Empire Games (now Commonwealth Games) in 1934.

Jahangir hailed from a family that has produced so many First-Class cricketers that it is difficult to produce a family tree. He was the nephew of Khan Salam-ud-din, a tearaway fast bowler (hailed by many as the first in an almost non-existent breed of genuine Indian quicks) who had played for the Muslims in the Quadrangular and had toured England with the Indians in 1911.

Salam-ud-Din’s son Masood Salahuddin was five years younger to Jahangir, and both were quality fast-medium bowlers at First-Class level. Born in Basti Ghuzaar in Jullundur, Jahangir made an instant impact on debut in the Lahore Tournament of 1928-29, where he slammed 108 and finished with figures of 2 for 25 and 7 for 42 against the Hindus.

The innings victory was followed by another in a match that started three days later, where Jahangir returned figures of 6 for 49 and 4 for 48 to rout the Europeans. With 19 wickets and a hundred under his belt from two matches, the teenager suddenly sprung into prominence.

The next season, Jahangir picked up his career-best haul of 8 for 33 against the Europeans in the same tournament. By now, he was the leading bowler for Muslims (ahead of Nissar), and a 6 for 41 for Rest of India against India at Lahore earned him a place in India’s first international tour.

Jahangir began the tour on a high note with match hauls of 5 for 100 against Glamorgan and 5 for 89 against Oxford. He surpassed this with match figures of 6 for 126 against Cambridge: this would not be the last time that the famous University would be associated with his name.

He was an obvious choice for India’s first Test at Lord’s — one that is typically remembered for Nissar and Amar Singh’s hostile bowling that has now become a part of Indian cricket folklore. Nissar was almost unplayable in the first hour of the Test, and the hosts were soon reduced to 19 for 3.

When Nissar and Amar ran out of steam, they were replaced by Jahangir and CK Nayudu himself. Douglas Jardine hung on, but things were not easy for them as both men bowled with relentless accuracy. Jahangir finished with figures of 17-7-26-0 as Les Ames helped England recover to 259.

After Bill Bowes and Bill Voce then helped the hosts take a 70-run lead. By the time Amar had removed Herbert Sutcliffe early Nayudu had already summoned Jahangir: he responded almost immediately, running through the defence of Percy Holmes — and more significantly, clean bowling Wally Hammond, no less.

With Amar Singh backing him at the other end, Jahangir bowled with relentless accuracy and eventually removed Frank Woolley as well, caught by Sorabji Colah. With England down at 67 for 4, India sniffed a chance, but once again Jardine spoiled their party in the company of Eddie Paynter.

Jahangir bowled on relentlessly and eventually bowled Paynter as well; the tail, however, wagged vociferously, and Jardine hung on, helping add 53 for the seventh wicket and 49 for the eighth. When Jardine declared the innings closed at 275 for 8, India were almost out of the Test, needing 346 to win. Jahangir, giving almost nothing away, finished with figures of 30-12-60-4. Curiously, these remained his only Test wickets.

India lost the Test (despite an outrageously delightful eighth-wicket stand of 74 between Lall Singh and Amar) but fast bowlers were lauded by the British press. Jahangir continued to deliver throughout the season, scoring 420 runs at 20 and taking 50 wickets at 30.38.

Cambridge and the sparrow

Jahangir did a Doctorate from Cambridge University for four years thereafter and passed the Final Bar from Middle Temple School. He was a Cambridge Blue in cricket for all four years. In a four-year career spanning 39 matches, Jahangir scored 1,514 runs at 24.81 with 2 hundreds and snared 134 wickets at 25.47 with 6 five-fors and a ten-for.

These included a career-best match haul of 11 for 133 (4 for 75 and 7 for 58); he bowled unchanged in the second innings as Yorkshire (no less), chasing 162 for an easy win, collapsed to 142. He also registered 133 (his highest score) against Nottinghamshire.

Jahangir Khan’s stamina and nagging accuracy made him the perfect foil to the faster bowlers.

It was on July 3, 1936 that the famous ‘Sparrow Incident’ took place: chasing 283 MCC were batting serenely at Lord’s, and the match was meandering towards a draw. It was then that it happened: as poor TN Pearce tried to play forward he suddenly found that something had hit the stumps.

It was certainly not the ball: as the players huddled around the stumps they found a dead sparrow near the stumps. Wisden later wrote: “TN Pearce, the batsman, managed to play the ball and the bird fell against the stumps without dislodging a bail.”

In subsequent years Wisden cast doubts on the validity of the incident. It wrote: “While legend has it that the sparrow was struck by the ball in flight, it is thought no-one actually saw this happen.” The sparrow was treated with due respect and found its way to the Memorial Gallery at Lord’s. It even made a trip to The Grand House Sparrow Exhibition in Rotterdam in 2006.

India’s 1936 tour of England was marred by the murk of internal politics led by Vizzy; Lala Amarnath was sent back; and India’s performance was generally poor barring the iconic opening partnership at Old Trafford between Vijay Merchant and Mushtaq Ali; and Baqa Jilani, Jahangir’s brother-in-law, who played his only Test when he insulted Nayudu over the breakfast table.

Jahangir toiled through all three Tests, conceding 169 runs without taking a single wicket. He failed with the bat as well (though he almost always batted above Vizzy, who, of course, never bowled). His tour records were not too bad as he finished with 40 wickets at 63.87, finishing the tour with 4 for 42 and 4 for 92 in the Scarborough Festival match.

Jahangir returned to India after his course at Cambridge and continued to play the Bombay Pentangular and the Ranji Trophy. However, matches were few, thanks to the Indian domestic cricket calendar. He continued to play cricket till 1946-47, and after the Partition he moved to Pakistan. He did play three more First-Class matches after that but hung up his boots for good after 1951-52.

Jahangir served as a Selector for the Pakistan national side. He also worked as the Principal of a college, and was appointed as the Director of Education in Pakistan. He managed the Pakistan team on their India tour of 1960-61.

When Jullundur hosted its first Test (against Pakistan in 1982-83), Jahangir was specially invited for the auspicious occasion. He passed away on July 23, 1988 at 73 years 178 days: he was the last survivor of the Indian team from their first ever Test of 1932.

Jahangir was the doyen of one of the grandest of cricket fraternities. He had been preceded by Salam-ud-Din and had played alongside Salahuddin, but it was he who was the first to break through to the Test level. He was followed by Baqa Jilani, albeit under dubious circumstances.

When Majid’s son Bazid took field against West Indies at Kensington Oval in 2005 the Khans became only the second grandfather-father-son trio to play Tests after the Headleys of West Indies and England. Kamran, another grandson of Jahangir (Asad and Majid’s nephew), was also a First-Class player.

It has been four generations of First-Class cricketers for the Khans now. Will there be a fifth? 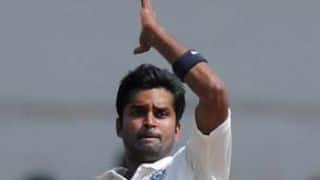