Some fast bowlers pounce on almost every team’s batsmen. When England dropped Steve Harmison and Matthew Hoggard before the New Zealand series of 2008, many predicted the end of an era in England’s cricket. These two bowlers formed a successful pair together and were replaced by James Anderson and Stuart Broad. In the present times, Anderson and Broad have formed a lethal bowling pair for their nation and are very effective in conditions conducive for swing bowling (and that is an understatement). Individually, Anderson, being senior to Broad, has taken more wickets, but it is his swing bowling which makes him unplayable for teams touring England. LIVE CRICKET SCORECARD: England  vs  Sri Lanka , 2nd Test match at Chester-le-Street

The 33-year-old Lancastrian has been a phenomenal performer for his side, especially in whites. His ability to swing the ball both ways and obtain snicks from established batsmen bat is commendable to say the least. He bowls with pace and pitches the ball in the zone with alarming regularity, making it almost impossible to leave the ball alone without a shred of doubt. That is where Anderson stands out: he creates enough doubt in batsmen on whether whether to play the ball or leave it. Consider India’s England tour of 2007, where he troubled Indian batsmen in all Tests, on flat pitches or otherwise; he finished with 14 wickets in the series and was awarded the Man of the Series. READ: England should persist with Moeen Ali and make him bat in the middle-order

Jimmy’s biggest ability lies in making batsmen poke at balls outside off-stump and bowl an inswinger without visible change in action. The ability to move the ball either way never ceases to cause doubt in the minds of batsmen. He did not have a very pleasant start to his career and kept on giving inconsistent performances. Frequent injuries did not helped his cause, but he battled injuries of sorts and kept coming back. The zeal to perform never died inside him. He went for intensive training with Lancashire, where he bowled with new ball regularly in nets and matches with the aim to contribute more for England. Since then, England has always performed well when Anderson performed with the ball.

Talking about stats, he became England’s leading ODI wicket-taker during ICC Champions Trophy 2013. In Tests, he has undoubtedly been more successful and has bowled his heart out with long spells thanks to the plethora of variations in his arsenal. He was brilliant when England retained The Ashes in Australia in 2010-11 (for the first time in 24 years) with 24 scalps under his belt. He also did reasonably well when India lost their home series to the Englishmen in 2011-12, in conditions that did not assist fast bowlers. He also troubled Indian batsmen a lot in India’s 2015 tour of England after a slow start in the series. He was also the leading wicket taker in England’s tour of West Indies in 2015 and bagged the Man of the Series award. In England’s two-Test-tour of Sri Lanka, his fierce spells made the visitors level the series and following his impressive show, he was named England Cricketer of the Year.

Despite the quiet start, Anderson’s effectiveness has never really faded out for a period over a decade. Whenever he failed, England have gone down without much resistance. In the previous two editions of ICC World Cup, in 2011 and 2015, he had no show in his report card, and England bowed out of the mega-event sooner than expected. In the ongoing series against Sri Lanka, England have taken lead against a struggling and inexperienced opponent thanks to Anderson’s consistent seam bowling. Overall, he remains England’s go-to-man and continues to remain their man for all seasons. 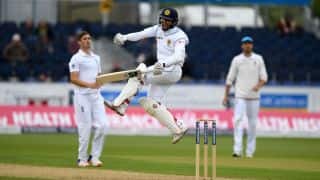