Jadeja-Anderson seem to have attained an Symonds-Harbhajan level of hostility for each other.

After a seemingly docile draw between India and England at Trent Bridge in the first Test, the news of Ravindra Jadeja and James Anderson being involved in an on-field altercation came like a bolt from the blue. Now that both players could face bans, Shiamak Unwalla looks at how the incident might affect the two teams leading into the second Test at Lord’s.

Over the last two days, a thus-far controversy-free series has suddenly turned ugly. Almost out of nowhere, Ravindra Jadeja and James Anderson seem to have attained an Andrew Symonds–Harbhajan Singh level of hostility for each other.

While Anderson being charged was surprising enough, the fact that the England team retaliated by levelling a similar charge against him has made the whole affair even more ridiculous. What is perhaps most surprising is that there is virtually no evidence of any on-field scuffle whatsoever. There was no Television footage of it — and if there is, then it has yet to surface on the internet — and members of the press present at the ground as well did not seem to have noticed anything amiss.

And yet, two players are faced with the prospect of a one-match ban. However, the ban — if applied — will take effect only after the second Test. Which means, both Jadeja — unless he is dropped in favour of Ravichandran Ashwin — and Anderson have a good chance of taking the field at Lord’s, and possibly coming in contact with each other on the field.

What will this mean for the two sides?

The last time an Indian was involved in a similar controversy, he was the perpetrator — according to the English team management that might be the case here as well, but that is just an allegation — and things got extremely ugly after that.

India’s tour of Australia 2007-2008 saw the infamous MonkeyGate scandal which nearly brought the series to a premature end. Luckily, this time there has not been such an extreme step threatened by either side.

However, this is just the kind of spark that could ignite some more hostility between the two sides. That being said, India are led by a man who personifies coolness. MS Dhoni could reign in any misplaced aggression and prevent it from bubbling over. Likewise for England, Alastair Cook has the temperament to soothe things over, should the need arise.

On the other hand, this incident has certainly added a bit of spice to what was a rather dull first Test. One thing that can be assured is that none of the 22 players on the field are likely to be laid-back coming in to the second Test. If things do heat up — and it would be very surprising if they do not — then things could get personal.

In such a scenario, the pitch becomes less important than the players who are up against each other. Players could take each other on, and pride, ego, cockiness could take centre-stage if this happens. Both sides have some very level-headed players like Cheteshwar Pujara, Ajinkya Rahane, Bhuvneshwar Kumar, Ian Bell, Joe Root and Moeen Ali, among others. But both sides also have a couple of firebrands in their midst who could clash if things come to a head.

All in all, this controversy, while inexplicable and perhaps a bit immature, could inject life into the series. If the remainder of the series is played hard but in good spirit, we could have a very interesting series ahead. 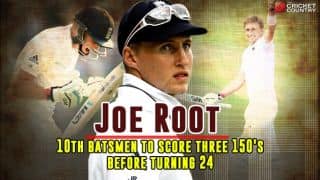 Joe Root: 10th batsman to get three 150 or more Test scores before turning 24