Taylor has a good habit of making it big whenever he gets the three-figure mark.

In County Championship Division One, James Taylor was out for 291 for Nottinghamshire against Sussex on July 20, 2015. Bharath Seervi lists all the instances of nervous 290s in First-Class cricket — a list on which Taylor is the 29th.

Playing for Nottinghamshire against Sussex at Horsham in County Championship 2015 Division One, James Taylor went on to score 291 before getting out missing out on a triple century. When he walked out to bat Notts were reeling at 14 for 2; they soon became 30 for 3. Taylor and Riki Wessels added 144 for the fourth wicket, but once again they were 186 for 5. Australia levelling an Ashes series in the second Test after losing the first

Taylor then shared a partnership of 365 runs with Chris Read. He completed his century and was unbeaten on 163 on the first day. On Day Two he reached his double century. He got past his previous best score of 242 not out, scored his maiden 250, and fell nine runs short of his maiden triple ton. He was caught by Chris Nash off Steve Magoffin. The declaration was made with this dismissal at 570 for 7 wickets. Sussex could score only 213 and 254 in their two innings and lost the match by an innings and 103 runs. Steven Smith: 192, 199 and then 215 — the record-making machine

Taylor has a good habit of making it big whenever he gets the three-figure mark. Out of his 19 First-Class centuries, 10 have been in excess of 150, and six have been double-hundreds. He has been out only seven times after completing his 19 centuries and all were caught, which is kind of interesting. Ross Whiteley smashes 11 sixes in his innings of 35-ball 91

The 291 by Taylor is the 29th occasion of a batsman getting out in 290s in First-Class cricket. One must remember that the count of First-Class matches played till date exceeds 56,000 First-Class matches (of which a mere 2,172 have been Tests). About half of these First-Class matches have been played in England, where lies the origin of this game. Of the 29 nervous 290s, five have been in Tests. It was also the 40th First-Class 290 (the batsmen have remained not out 11 times). Highest team totals after losing a wicket on the first ball of a Test

The last batsman to get out in the 290s was Virender Sehwag, for India against Sri Lanka at Brabourne Stadium in a Test in 2009-10. The table below has the complete list:

The 29 nervous 290s in First-Class cricket

–          Of the 29 dismissals, 15 have been in England, 4 in India, 4 in New Zealand, 3 in Pakistan, and 1 in each of Australia, South Africa and West Indies. There have been no such instances in Sri Lanka, Bangladesh and Zimbabwe — the other Test-playing nations.

–          Among the above names, only few scored triple-hundreds in their career. They are Trumper, Sehwag, Mark Ramprakash, Eddie Paynter, Viv Richards and Wally Hammond. The other never went past the 290s.

–          Apart from Martin Crowe and Mike Powell, Don Bradman and Shantanu Sugwekar are the others to miss their triple centuries by one run. They ran out of partners while on 299. 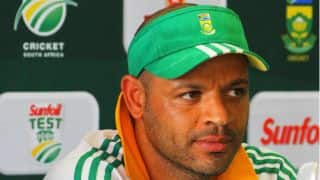 Alviro Peterson and Ashwell Prince: First instance of two batsmen scoring between 250 to 300 in the same innings in First-Class cricket