Janardan Navle was India's first wicketkeeper. He took first strike for them. He was also their first dismissed batsman.

Janardan Navle, born December 7, 1902, stood up to fast bowling better than most Indians of his era. Abhishek Mukherjee looks at India’s first Test wicketkeeper who also faced the first ball for India in Test cricket.

Janardan Gyanoba Navle was India’s first Test wicketkeeper. He also faced the first ball for India in Tests. Over eight decades have passed since that historical Test at Lord’s; heroes have risen and fallen, and will arise on the horizon; nobody, however, will be able to take away the “first”s of Navle.

It is difficult to assess how good Navle was, but we have a few documentations. Jack Hobbs compared him with Bert Oldfield and George Duckworth, the two champion glovemen of the era. Neville Cardus called him “polished” and “quicksilver”. Wisden wrote that Navle was “a first-rate wicket-keeper, very quick in all he did.”

Navle was swift. His small frame (5’4”) helped him to get down quickly; he had sound reflexes, and was no short of spectacular. He finished with 101 catches and 36 stumpings from 65 matches. With the bat he was gutsy, and had enough pluck to take on some of the quickest bowlers. His 1,917 runs came at 19.18, and included 9 fifties.

The son of a farmer and a cloth merchant, Navle was born in Fulgaon. He made it through to the Quadrangular at 15, and opening batting, he helped Hindus win the tournament two years later (he scored 74 in the semifinal against Muslims and 96 — his career-best — in the final against Parsees). Playing against Bengal in a the final of Nagpur Provincial Tournament he top-scored with 99 before SM Joshi won it for Bombay.

But it was his wicketkeeping that grabbed the eyes of the nation. Navle played several matches against Arthur Gilligan’s MCC, and did a good job on either side of the stumps. Playing for a representative Indian side, he scored 74 against MCC at Bombay Gymkhana.

First-Class cricket was sparse, and though BCCI had been formed, Test cricket was some time away. Navle top-scored in each innings with 82 and 39 (and took 3 catches) against Parsees in the 1929-30, and came to be considered as among the best glovemen in the country.

When India’s first Test tour was announced, Navle did well in the trial matches (25 and 3 dismissals for Possibles against Probables; and 50 and 36 for India against Rest of India). He was selected, with Bahadur Kapadia as his deputy.

Navle did not impress with the bat, scoring a round 600 (his only fifty was 64 against Lancashire) runs at 15.79 from 21 matches, but he impressed the English critics with his competence behind the stumps. Most importantly, Navle played in India’s first Test at Lord’s.

Mohammad Nissar and Amar Singh rocked England in the first half hour of India’s Test cricket history by reducing England to 30 for 3. Fresh from their 555-run partnership, both Percy Holmes and Herbert Sutcliffe were bowled by Nissar, whereas Frank Woolley was beaten by a throw by the livewire Lall Singh: Navle broke the stumps with the Kent legend still short.

Wally Hammond and Douglas Jardine were not comfortable, either, but they hung in there. Amar Singh bowled Hammond; Eddie Paynter did not last long, and England could have been in a worse situation, had Navle not dropped Les Ames before he had got off the mark.

Soon afterwards, Jardine edged one to Navle off CK Nayudu. It remained Navle’s only Test dismissal, but Ames made the most of his innings. He scored 65, was ninth out, and England recovered to 259 despite Nissar’s 5 wickets with excellent support from Amar Singh and Nayudu.

Then Jardine tossed the ball to the debutant Bill Bowes, who was to be a crucial cog in the Bodyline series that would follow. Bowes would bowl to Janardan Navle, who would face the first ball for India in Test cricket. He scored 12 before Bowes ran through his defence. He was also the first Indian to be dismissed in Test cricket. India conceded a 70-run lead.

Jardine set India a target of 346. Navle was flamboyant, but not at his best. The Cricketer wrote that he was “smart at the wicket, but he missed two or three chances, and might be even more effective if there were a little less flourish about his work.” Navle was trapped leg-before by Walter Robins, and India were bowled out for 187.

Navle was retained for the first ever Test on Indian soil, at Bombay Gymkhana, mainly due to his experience and his wicketkeeping and batting  (he top-scored with 79) against Ceylon at Kotla. It was not really a memorable outing for Navle: he fell to Hedley Verity for 13 and to Nobby Clark for 4, and did not take a dismissal. India lost by 9 wickets and Navle was replaced by Dilawar Hussain. He did not play another Test.

Navle did not play for long. He was selected to play Jack Ryder’s Australians at Bombay Gymkhana, but scored a pair (the hosts also had identical scores of 163 in each innings). He also played them for Central India at Indore, but failed again. He played only two Ranji Trophy matches, for United Provinces in 1942-43 and for Gwalior in 1943-44. His sides were knocked out in the first round on each occasion, and he never played again.

Navle was a matriculate from Bhave School, Poona. Navle was recruited in the Service of Gwalior. He later became a security officer in a sugar mill. He spent his last days living in a two-bedroom apartment in Poona, and passed away on September 7, 1979, exactly 3 months short of his 77th birthday.

Note: Some sources say he died in extreme poverty, and was seen begging on the Bombay-Poona highway in his last days. Josh Hazlewood: Can he be a key factor in Australia’s pace attack against India in Tests? 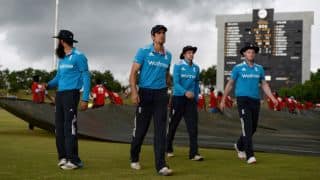