Janette Brittin, born on July 4, 1959, was one of England’s premier batswomen. She still holds the record of highest number of Test centuries. In her 19-year-old career between 1979 and 1998 she made 90 appearances for England, playing 27 Tests and 63 One-Day Internationals (ODIs). Sudatta Mukherjee looks back at the career of women's cricket's highest Test run-getter. Janette Brittin, born on July 4, 1959, was one of England’s premier batswomen. She still holds the record of highest number of Test centuries. In her 19-year-old career between 1979 and 1998 she made 90 appearances for England, playing 27 Tests and 63 One-Day Internationals (ODIs). Sudatta Mukherjee looks back at the career of women’s cricket’s highest Test run-getter.

Janette Brittin’s story is about Britain’s most celebrated lady cricketer who carved a niche for herself, courtesy of her batting skills and longevity. Brittin featured in four Women’s World Cups — 1982 New Zealand, 1988 Australia, 1993 England and 1997 India. At the time of her retirement, she was one of only three players to have achieved the feat, the others being New Zealand’s Debbie Hockley and Sharon Tredreg of Australia.

Of the five centuries she scored in One-Day Internationals (ODIs), four were scored in the World Cup — talk of big stage temperament! Her ODI average of 42.42 is the 11th highest for players who have played minimum of 20 innings. However, from the four World Cups she featured in, it was in 1993 that she guided the England team to World Cup win, that too at the Mecca of cricket , Lord’s, where earlier women were not allowed even in the pavilion or were allowed to be members of the Marylebone Cricket Club.

Brittin remembers, “Never before have I gone out… with tears in my eyes, caused by the wonderful ovation from the members who lined our path through the Long Room, followed by the crowd’s reception as we walked out to the middle,” she was quoted saying in ESPNcricinfo. She became the first woman to score 1000 World Cup runs. She finished with a World Cup tally of 1,299 with an average of 43.3 including four centuries and three 50s. She was also the top run-getter in the 1982 and 1993 editions. Her catch in 1993 to dismiss New Zealand’s Catherine Campbell in the final helped  England lifted the World Cup at Lord’s.

The five hundreds in ODI once were the most in women’s ODI history. Moreover, Brittin scored her five centuries from 63 matches, whereas Claire Taylor, Karen Rolton and Charlotte Edwards have played 126, 141 and 168 ODIs respectively for their eight hundreds. Belinda Clarke has played in 118 ODIs for her five centuries. 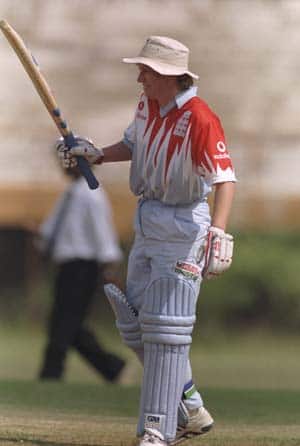 Jan Brittin raises her bat in acknowledgment for her century in the World Cup match against Pakistan at the Hyderabad’s Fateh Maidan in December 1997 © Getty Images.

Brittin is the only women cricketer to have scored more than 500 Test runs in a calendar year. In 1984, her 531 Test runs came from five matches at an average of 75.85. In her final year at the international level in 1998, she scored 450 Test runs at a whopping average of 112.50. It also included back-to-back centuries against Australia: 146 at Guildford and 167 at Harrogate. The only other person to score back-to-back centuries was England’s Enid Bakewell. In the same series against Australia, Brittin became one of the three batswoman to score a century and a fifty in Test cricket.

While penning down an article on the 1997 World Cup in India, which was her last World Cup appearance, Brittin wrote, “We’d have had Australia in the final [1988-89], and it would have been a chance to avenge our only defeat in our group matches. I’m 37 now and my reaction was: ‘That’s it, time to retire.’ My family would be disappointed because I’m quite close to a few records — like Rachael Heyhoe Flint’s for highest run aggregate for England. But it’s been a good innings and I’m not sure I want to keep going through the summer. I’ll have to think about it some more.”

Seven months later, she played her last ODI match and in August 1998 and her last Test too. Even in her last ODI match, she score an unbeaten 46, even though England lost by eight wickets. She has played with a young 18-year-old torch-bearer of English cricket Charlotte Edwards who is current captain of the national team.

Brittin is England’s highest run scorer (4,056 – 1,935 in Tests and 2,121 in ODIs), England’s most capped Test player (27) and the world’s second most capped player behind New Zealand’s Debbie Hockley. Her five centuries in Test are the most in women’s Test cricket history.

Brittin made her debut for Surrey in 1976 and donned England colours three years later in the first Test against the West Indies. She also played indoor cricket and indoor hockey for England.

(Sudatta Mukherjee is a reporter with CricketCountry. Other than writing on cricket, she spends penning random thoughts on her blog and produces weekly posts on new food joints at Whopping Weekends. She played table tennis for University of Calcutta. When she is not writing, you will catch her at a movie theatre or watching an English serial on her laptop. Her Twitter ID is @blackrosegal)

Clive Rice hits century in total of 143 where the second highest score was 10!