Jason Krejza: Off-spinner who gave a glimpse of promise on his Test debut before fading into the sunset

Jason Krejza: Off-spinner who gave a glimpse of promise on his Test debut before fading into the sunset

Jason Krejza went onto take 12 wickets on his Test debut against India.

Jason Krejza, born on January 14, 1983 has that uncanny ability to spin the ball hard. But bowling off-spin in Australia was never going to be an easy task for the New South Welshman. He also struggled to bowl with good control to keep the batsmen on their tenterhooks by tying them up in knots. Bharath Ramaraj has more….

Very few off spinners from Down Under climb up the ladder and take the cricketing world by storm with incandescent performances. In the last 20 or so years, only Tim May, Nathan Hauritz and Nathan Lyon have been able to create ripples in the international circuit from Australia. Australian conditions demand a fine wrist spinner who can impart more purchase on the ball. So, when Jason Krejza made his First-Class debut for New South Wales in 2004-05, he knew that it was always going to be an uphill struggle for him. He went onto take 12 wickets on his Test debut against India, but he was given just one more chance to don the Baggy Green Cap, before the door was shut on him by Australian selectors.

In reality, Krejza has had to wade through many marshes and bushes in his career. Even when he played his first First-Class game against Queensland at Brisbane, he was nothing short of a mere spectator. On a seaming deck, seamers from both teams ruled the roost and took a bucketful of wickets.  But the captain of New South Wales, Brad Haddin, gave Krejza just a single over in the entire game and to make it worse for him, he was walloped all over the park and taken for 18 runs.

So, when we look at an off-spinner’s record from Australia, one has to be slightly sympathetic. Even Tim May, whom the writer rates highly, averaged a tick over 34 in Tests. Yes, Krejza’s First-Class average of nearly 50 isn’t acceptable by any stretch of imagination, but when it comes to an off-spinner from Down Under, we have to analyse their records from a broader perspective.

If we go back in time to 2008, in his Test debut against India at Nagpur, Krejza did show that never say die attitude by tossing it above the eye line of the batsmen and enticing them to play strokes. He also spun it hard in the game and extracted a little bit of bounce. The Indian batsmen kept tonking him high into the orbit for majestic sixes. However, the credit has to go to the off-spinner for not losing the plot and was eventually rewarded for it with 12 wickets next to his name.

If Rahul Dravid was done in by the classical off-spinner’s delivery with Krejza pitching it on an off-stump line and getting him to prod forward to offer a bat-pad catch then, Sehwag was snared by the one that turned off the track to shatter his timber.  In the second innings, he teased and tempted the willowy VVS Laxman to the trap set by him and finally won the battle with another flighted delivery that invited the drive, and sent the stumps for a walk in the park.

Actually, he had taken some help before the match from the legendary Indian spinner, Bishan Singh Bedi. He even added another bow to his string after that invaluable discussion with the legend. Bedi helped him to bowl the floater that turns towards slips without any change in its direction. Krejza even expressed his gratitude by thanking the great man after taking a truckload of wickets. Critics opined that he was bludgeoned around the park by the batsmen and was taken for more than 200 runs in the first innings. However, when up against the famed Indian batting line-up of yore, any spinner had to bowl with gambling instincts and be prepared to be taken to the task in order to take wickets.

Unfortunately from Krejza’s perspective, he played just one more Test at the Western Australian Cricket Association (WACA) ground on a batting paradise against South Africa and never played again. One can’t escape from the fact that Krejza’s performances for his First-Class team Tasmania have been dire in recent years.  He last played a game for them back in 2012-13 against Western Australia.  He has even lost his state contract with Tasmania now. With Lyon firmly finding himself at the top of the pile in the spin department, Krejza’s career is coming to a sorry end.  But in 2008-09, when he took 12 wickets in India, he gave an inkling that he belongs to the old school of Australian off-spin bowling who believed in playing an attacking brand of cricket. He did return for the 2011 World Cup, but then disappeared from the international scene. However after the high noon he reached at Nagpur, it turned out to be a false dawn. 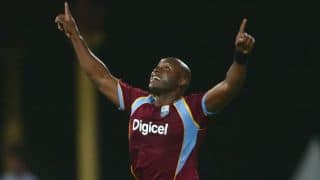