He might be the best find for England in limited-overs cricket of late, but Roy definitely wants to earn his spot in Test cricket as well.

Born July 21, 1990, Jason Roy is an English cricketer who currently is a part of country’s limited-overs squads. The powerful right-handed batsman, who was born in South Africa, turns 27 this year. With the South Africa and England connection, Roy’s case is similar to that of England great Kevin Pietersen. He has been a sensation of late and his smashing knock of 78 off 44 deliveries landed his side into the final of ICC World T20 2016. He might be the best find for England in limited-overs cricket, but Roy definitely wants to earn his spot in Test cricket as well. However, his recent dry patch has put England in spot of bother. However, Roy, who made his debut in international cricket in 2014, has a tale of his own. Shruti Hariharan takes a look at some intriguing facts about the 27-year-old:

1. Academic Brilliance: Roy is one of those sportspersons, who loved books. He was excellent in sports science and business management. He was even offered a place at St. Mary’s University College at Belfast. However, he turned down the offer to pursue his ambition for cricket that he started off at the age of nine.

2. Childhood and Cricket: Cricket just happened to Roy! Speaking over an exclusive interview, Roy mentioned he was not at all keen in cricket. He was more into beach surfing and playing rugby along with his folks. He was pretty much a brat as he used to mess around on his grandparents’ farm. It was when he moved to England, cricket turned to be a reality.

3. Rare T20 record: He made his debut for Surrey at the age of 17 in 2008 and his fielding talents were noticed by England, who used him as a substitue later that summer against South Africa. In 2010, Roy became the first ‘ever’ batsman from Surrey to score an unbeaten century in T20 cricket. He scored 101 off 57 deliveries against Kent.

4. Roy’s dark days: Roy might be a hero for England today, but he faced certain dark days in 2012 when his close friend and fellow cricketer Tom Maynard was killed on a railway track while attempting to flee police in south London. It hit Roy hard and made it difficult for him to concentrate on the game. In Surrey’s match after Maynard’s death, Roy was uncontrollable as players stood for a minute’s silence. Four years have gone by since and Roy has created history for himself in international cricket overcoming those dark days.

5. Kevin Pietersen-Jason Roy connection: It is not just the same country (be it birth or team) connection, but off the field too Roy and Pietersen share tremendous bond. They are golf buddies and going by Roy’s social media posts, he truly enjoys watching Pietersen whack the ball. On the field as well, comparisons have been made between the two with regards to Roy’s natural confidence, often confused with arrogance, combined with his penchant for big-hitting. Have a look:

RG @kp24: Feels like I’m playing back in Africa today…found an adder on the course with @jasonroy20 #regramapp

The ‘Protea bond’ just seems to get stronger!

6. Early cricketing idols: Before Roy ventured out for his international cricket journey, he looked upto Brian Lara and his playing style, which has motivated him towards cricket. Former Australia skipper Ricky Ponting is also among the list of Roy’s favourites. Roy has also cited Sri Lankan legend Kumar Sangakkara, who has played with Roy for Surrey as well, as one of his batting idols. Of course, he also finds his off-field friend Pietersen as his batting idol. Amongst the bowlers, he likes to face South Africa pacer Dale Steyn.

7. Australia bond: Roy also had an Australian connect, thanks to Big Bash League (BBL). Roy joined franchise Sydney Thunder to replace his England skipper Eoin Morgan for a short while in 2014. He has earlier played for Port Adelaide and ended being the leading T20 run-scorer for the side in the final.

8. Jason Roy’s love for Golf: In his off time, he loves to play golf. Not just with Pietersen, he also plays along with his friends. It does give him a buzz, although he does not care about the technical bit of it.

10. Story behind Jason Roy’s success: Roy’s excellent form with the bat had led him to join Pietersen and Ravi Bopara in Mission Sports Management. This organisation provides a range of services that allow athletes, be it cricket or other sports, to fulfil their on-field potential, raise their public profile, and maximise their financial earnings. It was when Roy was building his career in Surrey and England that he joined them. He till date credits this management through various posts from his social media account.

11. Bizarre run-out: Roy had set-up a morale-boosting win for England through a bizarre run-out. Yes. In the ongoing England tour, Roy was given out for obstructing the field! The incident happened when Roy veered off a straight course and was hit by a throw from Andile Phehlukwayo when short of his ground. Hard to believe? Watch it for yourself:

South Africa appealed and, after the decision was referred to third umpire Tim Robinson, the former England opening batsman decided, as required under cricket’s Law 37, that the obstruction had been “wilful” and Roy, to his visible dismay, was given out. 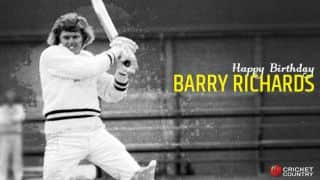 New Zealand land in Zimbabwe ahead of Test series