The Indian lower-order had to be changed due to injuries. Jadeja batted at Saha's position, keeping Jayant at No. 9. As a result, the onus this time was on the spin troika of Ashwin-Jadeja-Jayant to shoulder the late-order blitz.

“Wriddhiman Saha is doing a great job in Test cricket. That hundred in the West Indies really improved his confidence; he now understands how to bat with the tail,” Virat Kohli had said after the second Test against New Zealand at Eden Garden. First things first, a wicketkeeper-batsman usually bats at No. 7. That has been the norm over the years, be it Adam Gilchrist, Mark Boucher or MS Dhoni. However, Saha batted six-down, below Ravichandran Ashwin, when India dished out seven-batsman strategy. The idea was to hone Saha’s skill to bat with the tail. But if not Saha, who would India rely on? Live Cricket Scorecard: India vs England 3rd Test at Mohali

India dropped leg-spinner Amit Mishra after the first Test, making way for all-rounder Jayant Yadav. Armed with sound batting technique and sharp off-spin (on dust-bowls), Jayant has a remarkable record at the domestic level. Hence, adding him to the ranks only strengthened the batting unit. He scored 62 runs and scalped 4 wickets, including Ben Stokes and Moeen Ali. However, he doesn’t boast of any extraordinary skills. He doesn’t give you that impression, that spark. He bowls regulation off-spin, but is immaculately accurate. But his traditional batsmanship gives him an edge even over Ravindra Jadeja, for he is well balanced at the crease and prefers playing it late.

Opener KL Rahul and regular wicketkeeper Saha were ruled out due to injuries for the ongoing third Test, compelling the stand-in wicketkeeper Parthiv Patel to open the innings with Murali Vijay.

This changed the lower-order. Jadeja batted at Saha’s position, keeping Jayant at No. 9. As a result, the onus this time was on the spin troika of Ashwin-Jadeja-Jayant to shoulder the late-order blitz.

But there was no one to draw the art of batting with the tail, for Saha, the gritty Saha was injured.

India had a topsy-turvy start in reply to England’s 283 in the first innings. After Kohli and Cheteshwar Pujara scored a half-century each, they were reduced to 204 for 6, still trailing by 77 runs.

The game may have appeared evenly poised, but England had an upper hand.

Jadeja joined Ashwin in the middle. He, for the matter, has a reputation of throwing away his wicket. The wild slogs or lapse of concentration, he often fails to provide the much-needed impetus.

Ashwin, on the other hand, continued with his top-drawer batsmanship, scoring a vital 72. Meanwhile, Jadeja did not change his approach. He, like always, went after the bowlers and plundered 90 off 170. All the same, his mode of dismissal wasn’t surprising at all. He perished while clearing long-on something that wasn’t needed in the context of the game.

But Jadeja and Ashwin have done it in the past. They know what it takes to take the team out of the woods. Jayant, on the other hand, is new to international cricket and was up against the likes of James Anderson, Moeen Ali, Chris Woakes, Adil Rashid and Gareth Batty (only if Alastair Cook gives him the ball).

After adding 97 with Ashwin for the 7th wicket, Jadeja stitched up 80-run stand with Jayant.

Jadeja, by all means, stuck to his guns, playing his strokes. Jayant, however, had to take a step back and play second fiddle. In all honestly, that was the need of the hour. India needed him to put a price on his wicket.

While Jadeja dealt in boundaries, Yadav kept the scoreboard ticking in one and twos. The duo, for that matter, complimented each other well.

Amidst all this, Jayant scored his maiden half-century, inclusive of 5 boundaries only 5.

Two boundaries came off Anderson: the first one was a push-drive down the ground, followed by a punch between point and cover-point.

The third was a long hop off Rashid, followed by another long hop. In fact, he is as good on the front-foot as he is on the back-foot. He neither leans forward for every delivery nor does he have any trigger movement. In short, he is rock solid at the crease.

His fifth and final boundary, nonetheless, was a thick outside edge past the wicketkeeper.

Now let’s walk through how he batted with the tail.

When Jadeja went back to the pavilion, the scorecard read 381 for 8.

Given India have only 2 wickets in hand, any specialist batsman would try to score runs at a brisk rate. But Jayant has a calm head over his shoulders. He played on England’s mind, keeping Umesh Yadav off the crease and dealing in one or twos every over.

Even though the Indian winter has begun, the conditions were hot for the Englishmen. If you thought Mohali’s weather was pleasant, there were plenty of shirtless men in the Barmy Army. It was past 13.00 hours, and England were on the field for the consecutive day.

Jayant’s resilience got under England’s skin. He did not hustle. He simply kept his cool at the crease and spent as much time he could in the middle, for he knew India had acquired enough lead. Eventually, he was dismissed for 55, adding 33 runs with Umesh for the 9th wicket.

So far, so good! Jayant has already showed his character, even at crucial juncture. He, to put things into perspective, is a bright aspect for India in the long run. Why, you ask?

When India play abroad, they often play only a spinner. No doubt that Ashwin will feature in the playing XI. But India don’t have someone like Virender Sehwag or Sachin Tendulkar to roll over his arm in the time of need.

By all means, Jayant is a full-time batsman, a full-time bowler. No, he is not another Ashwin in the making. But, like Ashwin, he is a potential all-rounder, who can add value in the team. Why, you ask?

Barring the innings at Lord’s, Jadeja has not been imperative with the bat overseas not even in the West Indies.

On the other hand, Kohli fancies playing a five-bowler strategy. With three seamers, an Ashwin (because he is a brand) and an all-rounder in Jayant would make India a fierce force to reckon with, won’t it? 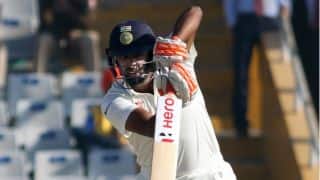 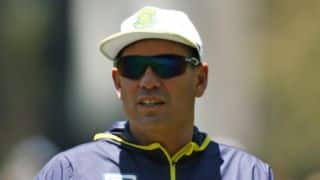