Jaywant Lele: One of a kind BCCI administrator who spoke frankly and fearlessly

Jaywant Lele: One of a kind BCCI administrator who spoke frankly and fearlessly

Jaywant Lele, the former Board of Control for Cricket in India (BCCI) secretary passed away at the age of 75. Nishad Pai Vaidya looks back at the career of one of the more liked administrators of Indian cricket. 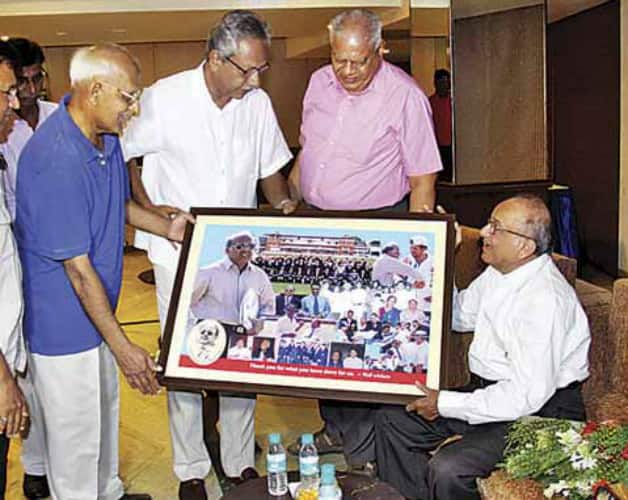 Jaywant Lele felicitated by Anshuman Gaekwad (in white shirt) and others from the Baroda cricketing fraternity on his 75th birthday on Sunday. Photo courtesy: Bharat Parikh/DNA

Jaywant Lele, the former Board of Control for Cricket in India (BCCI) secretary passed away at the age of 75. Nishad Pai Vaidya looks back at the career of one of the more liked administrators of Indian cricket.

“I am not sure whether it would be appropriate to mention it, but cricket lovers have a right to know about it” — a quote from I Was There: The Memoirs of a Cricket Administrator best personifies Jaywant Lele, the former Board of Control for Cricket in India (BCCI) secretary who passed away on Friday, five days after his 75th birthday.

There was something about Lele that endeared him to those who followed the sport in the country — journalists in particular. Always ready for an honest chat, Lele wouldn’t hold back and would be candid about matters which the average Indian cricket administrator wouldn’t generally share — be it Jagmohan Dalmiya taking on powerful people in the government; spilling out the reason for Navjot Sidhu’s walkout midway through India’s 1996 tour of England or coach Kapil Dev controversially over-ruling captain Sachin Tendulkar‘s decision to follow-on.

Lele’s sudden demise came as a shock to the Indian cricket fraternity. Only a few days ago, we watched him continue to criticise the current regime for its “double-standard” and also say that President N Srinivasan “is equally guilty.” Knowing well that he would have an opinion about the recent scandal, journalists would flock to him to get an interesting bite — even a rocking headline. The man’s experience was invaluable and was always up for a good story.

Hailing from Vadodra, Lele’s association with the sport came in many capacities. From playing in the gallis of the city to becoming part of the BCCI’s top brass, Lele came a long way in life. It was that passion for the game that kept him going be it as a player in Baroda (as it was known then), umpire, and administrator of the Baroda Cricket Association and the BCCI. In that long journey, he watched Indian cricket grow to become what it is today. He was there when the sport witnessed a monetary boom and turned into a lucrative trade. His stint as BCCI secretary from 1996 to 2001 coincided with that turning point.

Lele was a raconteur, which was not without flaws yet valuable as an anecdote. Speaking at a Legends Club meeting earlier this year, Lele had revealed how Sehwag’s selection was pushed by a certain selector. While the insider events may have been true, his account of the Delhi batsman’s scores on entry didn’t quite match the facts. Nevertheless, it did make a great tale — certainly something for the media.

Lele’s career as a cricket administrator spanned across giants in the BCCI; he worked with the likes of M Chinnaswamy, MA Chidambaram, Fatehsinhrao Gaekwad and, lastly, very closely with Jagmohan Dalmiya for whom he had the highest regard. He has also dealt with legendary players across six decades — from Vijay Hazare to Sachin Tendulkar. Working behind the scenes, men like Lele handle some of the big ticket matters that can make or break the game in the country. He does leave behind a rich legacy.

Perhaps, his most crucial contribution came when Indian cricket was rocked by the match-fixing scandal. In his memoirs, he mentioned, “I visit many places to talk about cricket. In view of my background in BCCI’s administration, people cannot resist the temptation to ask me about inside information on match-fixing. The human tendency is such that as I plead ignorance on the possibilities, they look at me in utter disbelief, as if I am deliberately concealing the truth.” Nevertheless, he did write about a few suspect instances “for the fans must know.”

Later, Lele was also embroiled in controversy for allegedly predicting India would lose 0-3 on the tour to Australia in 1999-00. It was something people readily accepted as he usually spoke his mind. However, he did explain the whole scenario in his book and explained that he was misquoted. Perhaps it was true — or, probably, it wasn’t! Lele was a unique breed — an administrator who spoke the truth irrespective of his relations with the other party. For example, AC Muttiah voted him out of the secretary’s post, but Lele still claimed to have “cordial relations” with him.

Former India opener Anshuman Gaekwad’s comments about Lele to DNA said it all: “What Lele did for cricket, no present administrator can do. He did it selflessly, without any expectations. Whenever the junior and senior teams of Baroda travelled, Lele was always present at the railway station. This happened even after he became BCCI secretary. That was his commitment level. Will any of the present administrators do that?”

Although, he was someone who may have given us a few laughs, he was dead serious about his job. Now, that he is no more, we do not know where we would find an honest character of the like. Where would you come across such men in today’s administrative setup? Indian cricket is indeed indebted to him.

Live Cricket Score: India A vs West Indies A, one-off T20 at Bangalore

HG Wells: A short cricketing history of the great writer