Jeremy Coney, born June 21, 1952, was a well-built all-rounder with a short-lived but highly successful stint as New Zealand skipper. Coney played multiple roles on the field for 13 years, for which he was awarded the MBE. Away from the cricket field, Coney was a musician and a teacher who went on to become a quirky expert of the game. Prakash Govindasreenivasan has more. Jeremy Coney, born June 21, 1952, was a well-built all-rounder with a short-lived but highly successful stint as New Zealand skipper. Coney played multiple roles on the field for 13 years, for which he was awarded the MBE. Away from the cricket field, Coney was a musician and a teacher who went on to become a quirky expert of the game. Prakash Govindasreenivasan has more.

Jeremy Vernon Coney’s childhood was nothing different from an average kid in New Zealand. Like most kids in New Zealand, Coney was introduced to Rugby early in his life. He managed to get the hang of the national sport, but the willowy Coney thought he was better off playing a sport that did not require him to put his body on the line — literally. He picked cricket, and what a choice it was!

However, cricket was not his only love. Coney came from a musical family and was enchanted by it early in his life. Coney was a tall and lanky youngster when he made his First-Class debut for a New Zealand Under-23 side against Auckland in 1973. When he got his first call-up to the national side in the same year, Coney was in the middle of his first teaching assignment in New Zealand. Vice-captain Glenn Turner’s untimely injury meant, Coney had to be pulled out of a school orchestra in which he was set to perform for the first time, and be thrown into the scheme of things in Australia for the first leg of the tournament — a three-match Test series. Coney arrived with an inadequate kit and a bat that was plastered from top to bottom. He was given money to buy a new bat, with which he ended up buying himself a guitar and kept his teammates entertained in return for their kit.

He did not play in the first Test in Melbourne, but took the field as a substitute fielder in the deep and had a nightmarish time, with the crowds giving him a lot of stick. His first chance to represent New Zealand came in the second Test at the Sydney Cricket Ground (SCG) where he turned out fine, scoring 45 runs in the first innings and latching onto a few catches.

Coney was a part of New Zealand team that registered its first Test win over Australia in the second leg of the Test series in Christchurch. However, he was dropped soon after, and did not play for the next five years.

One probably saw Coney’s real potential on two occasions. Coney went back to teaching music at Onslow college in Wellington after being dropped, but was brought back five years later for New Zealand’s home series against Pakistan. Having to come up against the likes of Imran Khan, Coney had to have a plan to counter the sneering pace and the demonic bounce that Khan could generate on bowler-friendly wickets. In fact, he used his experience from playing volleyball in his schooldays to counter extra bounce and protect his ribs. This tactic enabled him to jump and keep the ball down and not allow the close-in fielders to get their hands on it. Coney managed to score 242 runs in all the five innings of the tour, with a top-score of 82.

In the 1983 Prudential World Cup in England, he playing alongside the likes of Martin Crowe and Lance Cairns, who had an appetite for boundaries. Coney played second-fiddle on a lot of occasions. Chasing 235 in the game against England at Edgbaston, the Kiwis were reeling after Turner and Bruce Edgar were dismissed cheaply. Coney held the innings together, stitched two crucial partnerships and took the team home. He added 71 runs with Geoffrey Phillip Howarth and 70 with Richard Hadlee. In the process, he managed an unbeaten knock of 66 as New Zealand went past the home side’s total on the penultimate delivery.

Coney even featured in New Zealand’s tour of England in 1983, a four-match Test series, which they lost 1-3. By the end of this series, Coney had played 24 Test matches, but was yet to score a century. He had 10 half-centuries to his name but the three-digit score eluded him. Coney’s prowess with the ball, though, was seen in the same series. In the second Test at Headingley, Coney picked up the crucial wicket of Chris Tavare and came back in the second innings to dismiss two heavyweights in Allan Lamb and Ian Botham as the Kiwis pulled off a memorable five-wicket victory.

Coney got the opportunity to lead New Zealand in the last 15 Tests of his career where he led them to great heights. He juxtaposed his teaching abilities with his position in the dressing room and turned out to be a bold skipper who preferred calling a spade a spade. When asked what made him a good captain, his reply would be his ability to stay grounded and not hesitate to tell his teammates what went wrong. In his short stint as captain, Coney famously led New Zealand to their first series win down under in 1985-86. In the first of the three Tests in Brisbane, Hadlee ran riot with 15 wickets in the match, nine of which came in the first innings. The rejuvenated Kiwis under the captaincy of Coney had the best start to an Australian tour with a victory by an innings and 41 runs. Australia pulled one back and the focus was on the third and final Test in Perth. Once again, Hadlee reveled under Coney’s leadership and picked up 11 wickets that set up a six-wicket win.

Coney also became the first New Zealand skipper to lead a side that overcame the Australian challenge twice in the same season. In the three-match home series against the Aussies, the Kiwis won 1-0. Another first for New Zealand came under Coney’s reign, when he led them to their maiden series victory in England in 1986. During this series, one got to witness the humane side of Coney when he allowed England’s Bob Taylor to come on as a substitute for the injured wicket-keeper Bruce French, who got hit by a nasty bouncer from Hadlee.

Coney came from a musical family. During his growing up years, Coney played the piano, the guitar and the double bass. In an interview to Alloutcricket, he said, “Music was pivotal to my family. Of an evening, we’d roll back the carpets, Mum’d be singing, Dad whistling or playing the violin and we kids’d dance around. It was a genuinely wonderful childhood. Dad’d come home, put on his Paisley dressing gown, and when we’d finished singing, he’d throw to me in the garden, always throwing, never bowling — he’d talk about the trajectory of the ball, he’d appeal all the time. It was wonderful, a great time to grow up — it was the family that generated my interest in other things, and nurtured me.” 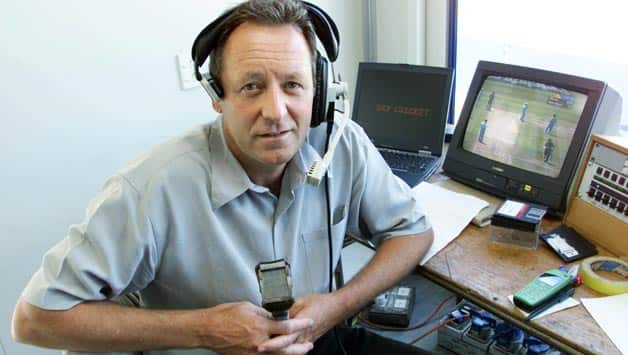 There was so much influence of music in his life that it reflected in his stint as a commentator and expert. There were times when his pitch reports would have a rhythmic ring to it. When asked about this, he would say, “I merely tried to change the model by dressing the information in a different outfit.”

He was often seen doing his pitch reports in an eccentric and entertaining manner that won him instant fans. Coney enjoyed the role of a commentator and a pundit across mediums. It helped him stay close to the game he absolutely loved, in two distinct manners. Talking about the differences in Radio commentary, which he does with Test Match Special (TMS), as well as doing it on TV, Coney said, “With radio I can reach metaphorically down a corridor into a little room and drag out a memory, or peruse the ground and discover something of interest while TV gives you the best seat in the house.”

Although music seemed to have had a bigger influence in his early life, Coney summed up his decision to pick cricket over music and giving up his teaching career when he said: Cricket came along and grabbed me by the throat, like a virus, and never left.