Taylor was never outstanding with the bat, but he has shown the ability to hang around and also play a few shots.

Taylor had a remarkable debut season for Jamaica, taking 21 wickets in six First-Class matches of the Carib Beer series. His best effort was eight for 59 against Trinidad and Tobago in a match where he finished with his maiden First-Class 10-for.

Taylor bowled the spell of his life at Sabina Park in 2008-09 against England. Batting first, England put on 318 with Kevin Pietersen scoring 97. Centuries from Chris Gayleand Ramnaresh Sarwan led West Indies to 392. It is not often that a team trailing by just 74 runs loses by an innings, but that is precisely what happened to England! Jerome Taylor bowled an unplayable spell of 9-4-11-5 to get rid of Alastair Cook, Pietersen, Andrew Strauss, Paul Collingwood, and Matt Prior as England were cleaned out for 51.

One of Taylor s finest ODI performances came in the ICC Champions Trophy 2006 against Australia. Chasing West Indies modest 234, Australia were on their way to an easy win at 214 for six, with Michael Hussey and Brad Hogg in the middle. Taylor had earlier dismissed Ricky Ponting, and with 21 needed off 14 deliveries, Taylor clean bowled Hussey.

New man Brett Lee was rapped on the pads first ball, as Australia lost two wickets off the last two balls of Taylor s over. Hogg and Nathan Bracken negotiated the next over, but Taylor came back with the wicket of Hogg off his first delivery to complete his hat-trick. Australia lost by 10 runs, as Taylor led an unbelievable turnaround.

Of all the cricketers Taylor has played against, the man he relished bowling to the most was one of the best batsmen of the era: Ricky Ponting. In 10 matches played against him, Taylor dismissedPonting nine times. Ponting averaged a mere 16.22 against Taylor, and was twice dismissed for a duck.

Taylor s T20 debut happened to be in the first T20I West Indies ever played. The match was played against New Zealand at Eden Park, and ended in a thrilling tie. Taylor took two for 30 in three overs, but Shane Bond led New Zealand to a 3-0 victory in the bowl out.

Taylor was never outstanding with the bat, but he has shown the ability to hang around and also play a few shots. The high point of his batting came against New Zealand at Dunedin in 2008-09. The Kiwis put on 365 in the first innings, and reduced West Indies to 173 for six when Taylor came in to bat at No. 8, with Shivnarine Chanderpaul at the other end. Taylor was the seventh man out, but not before lighting up Dunedin with a tremendous 106 off 107 deliveries, including 17 fours and three sixes. In comparison, Chanderpaul s 76 came off 200 balls! The match ended in a draw, but it could well have been a different story had it not been for Taylor.

For much of his career, Taylor has been plagued by injuries. He told Cricinfo in 2011, I have never been 100% fit. I always have niggles but they are workable, so I manage them and play with them.

Taylor was one of the senior players who fell out with the West Indies Cricket Board (WICB) toward the latter half of the 2000s. Along with the likes of Chris Gayle, Ramnaresh Sarwan, Shivnarine Chanderpaul and others, Taylor too was treated shabbily by the board. His fitness and temperament was called into question, and that resulted in a long layoff.

Taylor was an integral part of West Indies’ plans between 2006 and 2009-10. However, form and fitness issues coupled with his antagonistic relationship with WICB meant that he never played for West Indies between June 2010 and October 2014; this despite him being fit and willing to play for the country.

Taylor finally made a return to the national side after a four-year layoff in June 2014 against the visiting New Zealand. He announced his return by taking four wickets in the match, and has done well ever since.

On July 12, 2016, Taylor announced his retirement from Test cricket. The announcement came as soon as the West Indies squad was announced for the first of the 4-Tests series against India.

On April 13, 2017, Taylor announced he was coming out of retirement, just nine months after he called time on his 46-Test career. I believe I still have a lot of cricket left in me and I know I can still offer a lot to West Indies cricket in the Test arena, said Taylor. 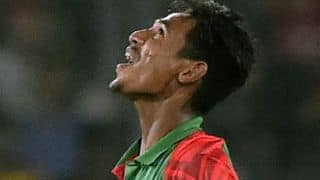 Mustafizur Rahman wants to do better in final ODI vs India