Ace all-rounder Jim Parks Sr was born on May 12, 1903. In 1937, he achieved the 3,000 run-100 wicket double in a single season — still a unique feat in the history of First-Class cricket. Abhishek Mukherjee looks at the grand patriarch of the Parks family that served Sussex for close to half a century.

James Horace Parks, usually referred to as Jim Parks Sr (his more illustrious son shared the same first name), was a competent all-rounder who served his Sussex loyally before World War II. He was more reliable than outstanding; he finished with impressive numbers; but his claim to fame remains his achievement in 1937, which is something nobody else has been managed to emulate.

Parks had topped the runs chart in the Championship with 2,578 (a feat later emulated by his son in 1957). In all, he finished with 3,003 runs at 50.89 and 101 wickets at 25.83, which helped him become a Wisden Cricketer of the Year. Till date, he remains the only cricketer to score 3,000 runs and take 100 wickets in the same season; given the current structure of the English season it’s unlikely that the feat will ever be emulated.

If there is one word that can describe Parks’ batting more than any other it has to be “brave”; his stout build and strong shoulders made him an excellent strokeplayer against fast bowling, which earned him a reputation as one of the pluckiest and most aggressive men at the top of the order. He formed a much-feared pair with Langridge at the top of the order.

Parks also bowled military-medium paced bowling; he generally bowled in-swingers with immaculate accuracy, which, with some assistance from the pitch, often jagged away sufficiently from the batsman to obtain an outside edge. He was also an exceptional fielder, especially at cover-point.

Jim and Henry Parks were born and grew up at Hayward Heath. Henry, two years younger to Jim, was a competent batsman and another Sussex mainstay; the two brothers had almost overlapping careers. Dick Richards, who later married the sister of the Parks brothers, also went on to play for Sussex.

Jim Parks almost never played cricket while at school. He could hardly be blamed, since he was over 16 when World War I stopped. At his father’s insistence, Parks joined Hayward Heath Club after the War. Jim’s Sussex trials did not go well, but he managed to do well against a very strong Sussex Club and Ground outfit: he finished with 6 for 44 and scored 50 when nobody else in his side managed 10. By 1923 he was called up by the Club, and he made his First-Class debut (albeit an innocuous one) against Surrey at The Oval next season.

It did not take him long to announce himself: at Horsham later that season Parks routed Leicestershire for 51 with career-best figures of 24-15-17-7. Those days he batted lower down the order — a practice that would change as the 1920s reached to an end. He came under the tutelage of Albert Relf, who played a crucial role in honing his technique.

Bowling, of course, was another issue. Wisden wrote that “bowling came naturally to him and he found himself able early in his career to swing the ball with little apparent effort.” With time the batting improved; it took Parks four seasons to score his maiden First-Class hundred, but when it did it was a big 162 against Nottinghamshire (the side included Harold Larwood and Bill Voce) at Trent Bridge. He would score two more hundreds that season.

He kept on delivering goods for Sussex, but he first made it big with his double in 1935, when he managed his first “double”, finishing the season with 1,633 runs and 103 wickets. Almost invariably he found a spot in the Ashes touring side of 1936-37.

Parks performed well in Australia and New Zealand: he scored four fifties in Australia and back-to-back hundreds (103 against Otago and 100 in an unofficial “Test” against New Zealand, both at Carisbrook). He finished with 808 runs at 40.40 from 13 matches to go with his 24 wickets at 31.29. Despite his efforts, he did not get to play a Test.

It is difficult to single out one Parks effort from his golden season of 1937, but a couple of feats do stand out: he carried his bat (again), this time against Cambridge University at Fenner’s Ground with 144 (Sussex scored 262); he added 297 with his brother Henry against Hampshire at Portsmouth — still a Sussex record for the fifth wicket.

Most importantly for Parks, two incidents happened for him, and it is very difficult to tell which one made him prouder: while he won a cap for the first Test of the home series against New Zealand at Lord’s, it was also the first time Jim Parks Jr saw his father play at Hove.

Walter Robins chose to bat, and Parks walked out to open with another debutant who went by the name of Len Hutton. The latter fell for a duck, while Parks hung on, scoring 22; Joe Hardstaff Jr (who hailed from another family with a knack of using the same first name) and Wally Hammond both scored hundreds, and England reached 424.

New Zealand batted well in patches, managing to reach 295 thanks to a 104-run eighth-wicket stand between Sonny Moloney and Alby Roberts. Parks had Martin Donnelly, no less, trapped leg-before, and removed Merv Wallace the same way. He finished with 2 for 26.

He failed in the second innings (but outscored Len Hutton, who scored a single) before Robins set the Kiwis a near-impossible 356 in two sessions. They finished on 175 for 8, Parks having Wallace leg-before again — this time for a cost of ten runs (his match figures read 21-9-36-3). He never played another Test.

Parks toured India with Lord Tennyson’s XI that winter, but did not meet with a lot of success. He had decent (though not exceptional) seasons in 1938 and 1939. The latter, his benefit season, made him richer by £734.

When The War broke out they said he was too old to join the Services. He joined the Police instead, who often played the Services at Lord’s. Parks Jr was a frequenter at these matches. When First-Class cricket resumed, Parks, then in his forties, did not find a place in the Sussex side. He played for Accrington in the Lancashire League, and in a rather surprising move, had a contract to play Plunket Shield for Canterbury at 43.

Even at that age, Parks bowled tirelessly in the three matches he played that season: he finished with 19 wickets at 23.57, but perhaps the striking feature was the sheer effort he put in. He sent down 1,488 balls (41.2 six-ball overs) per innings with relentless consistency, and ended the season with an economy rate of 1.81 runs an over.

When the Indians toured England in 1952 the 49-year old Parks Sr made a final appearance against them for Commonwealth XI at Blackpool. Opening batting, he scored 29 and 35, and snared Hemu Adhikari and Polly Umrigar before hanging up his boots.

His son James Michael Parks (Jim Parks Jr, or simply Jim Parks), also a Sussex stalwart, played a single Test against Pakistan at Old Trafford in 1954 before being left in the cold for six years. When Sussex were in desperate search for a wicketkeeper Parks Jr stepped in, and eventually went on to play 46 Tests for England as a batsman-wicketkeeper. Parks Jr’s son Robert (Bobby) James Parks was also a wicketkeeper who went on to play 256 First-Class matches, mostly for Hampshire and Kent. 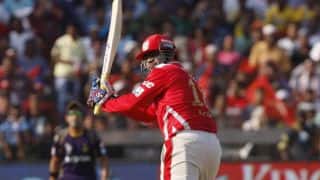