Jimmy Binks: The big gloves that brought glory to Yorkshire

Jimmy Binks: The big gloves that brought glory to Yorkshire

Jimmy Binks would later develop into something of a rarity, a Yorkshire cricketer born at Hull.

It seems that the city was originally known as Kingston upon Hull and was founded at the junction of the River Hull and the Humber estuary in the late 12th century. The monks of Meaux Abbey needed a port where the wool from their estates could be exported. They chose a place at the junction of the rivers Hull and Humber to build a quay. It was renamed Kings-town-upon-Hull by Edward I in 1299, and developed into a  market town, military supply port, trading hub, fishing and whaling centre, and industrial metropolis.

It was here, in a typical Yorkshire ambience, that the family of Jim Binks, a keen cricketer himself, keeping wickets for the GPO and the Hull Second XI, had an addition to his family on October 5, 1935 in the form of a bonny boy. They christened him James Graham Binks, otherwise known as ‘Jimmy’. Jim’s hands had become gnarled and fingers misshapen from standing up to the stumps for all bowlers. He wanted to spare his son the agony and wished with all his heart that the son would become a bowler. Jimmy Binks would later develop into something of a rarity, a Yorkshire cricketer born at Hull.

It was not to be, however; the son wanted to follow in his father’s footsteps, and was keeping wickets and opening the batting for Maybury High School soon enough. The trend continued through Riley High School and Hull Technical College, where Jimmy was studying Engineering. In the fullness of time, Jimmy was selected to keep wickets for the Hull 2nd XI like his father before him. When Jimmy was about 17 he was selected to play for Yorkshire 2nd XI against Hull University, and did well enough to be offered a wicketkeeper’s slot in the Leeds League, and, later, with the Yorkshire Council side at Headingley.

Compulsory National Service followed immediately after Jimmy Binks left college at the age of 18. His tenure, however, was for only about 10 days, as medical check-up revealed a problem with one of his lungs. Binks then underwent treatment for tuberculosis, spending two months in bed and the following three months in a sanatorium. He began 1955 playing for Leeds in the League. Gradual improvement of both his health and his dexterity behind the stumps led to his representing the Yorkshire Colts, and then to an extended trial with the Yorkshire senior team.

Binks has fond memories of his debut First-Class match for Yorkshire. Wisden states that Jimmy had been playing for the Yorkshire Colts XI at Jesmond when he was advised to report to Nottingham to join the senior side. It seems that Yorkshire had decided to give both Binks and Roy Booth (who had kept wickets for Yorkshire for the first half of the season) an extended trial before taking a firm decision on whom to persist with. The fresh-faced 19-year old had no idea about this and was happy to play on a match-by-match basis.

Yorkshire were playing Nottinghamshire at Trent Bridge in June 1955. Binks was the only debutant of the match. Arthur Jepson won the toss for the home team and Nottinghamshire batted first. Ronald Giles scored 142 in a total of 384. Joe Hardstaff Jr (75) and Eric Martin (76) also played useful hands. Brian Close picked up 5 for 95.

Yorkshire replied with 389 with a mature 194 from Len Hutton. Binks remained not out on 1 at No. 11. When time ran out on a drawn game, Nottinghamshire had scored 280 for 5 with a fine 134 from Hardstaff. The name of the debutant appeared thrice on this scorecard: Binks caught the first three men in the batting order.

Everything considered, it was a satisfying baptism by the rookie. This is how he remembers it: “It was the best batting surface I ever saw. Hutton and Hardstaff scored centuries and the leg-break bowlers, Leadbeater and Dooland, each had more than 100 runs hit off them.” Binks was told that he would be required for the next game. That made him happy enough.

And so it went till the end of the season, this game-by-game selection, and continued for the whole of the 1956 and for the first four weeks of 1957, until Yorkshire were fully convinced that Binks was indeed the right man for the job. Yorkshire awarded Binks the White Rose cap in 1957, after a long and protracted apprenticeship and probation, secure in the knowledge that they had made a wise choice.

With his tally of 1,071 dismissals Binks sits in the 17th place in the list of wicketkeepers with most First-Class career dismissals, a list headed by Bob Taylor with 1,647.

Selected for the England tour of India in 1963-64 as a second wicketkeeper to Jim Parks, Binks made his Test debut in the second Test at Bombay. England, reeling from illness and injury, could field only two specialist batsmen. They had no choice but to include both their ’keepers, with Parks reverting to the role of specialist batsman up the order.

In fact, Henry Blofeld, covering the match, was the only other Englishman available. He was asked to remain prepared. Thankfully, Micky Stewart announced at the last moment that he would be available.

Things got really serious for England when Stewart was declared unfit around tea on the first day, and Indian skipper Mansur Ali Khan Pataudi very graciously allowed AG Kripal Singh, and later, Hanumant Singh (who would mark his own Test debut in the fourth Test of the series with a century), to field for the tourists.

Binks held 3 catches in the India first-innings total of 300. He batted at No. 7, scoring 10. In the England second innings of 206 for 3 he opened the innings with Brian Bolus and hit his only Test fifty (55). Bhagwat Chandrasekhar enjoyed a good debut as well, picking up 5 wickets.

In his only other Test, the third Test at Calcutta, Binks held 5 catches in the India first-innings total of 241. Opening innings both times, he scored 13 in each innings.

By his own admission, his performances in his 2 Tests were not as good as he would have liked them to be. There was a perception that, apart from the fact that his First-Class career overlapped those of such expert wicketkeeper-batsmen as Parks and John Murray, Binks was not thought to be a good contributor in the batting department. The irony of the situation was that, even then, England felt it appropriate to have Binks open the innings in 3 of his 4 Test innings.

One assesses the skill of batsmen by their total runs, average, number of centuries, etc., and bowlers by the number of wickets taken, best bowling performances, number of 5-wicket hauls and of 10-wicket match hauls. It might be interesting to have a look at the instances of Jimmy Binks making 5 or more dismissals in an innings in his First-Class career, as follows:

In the 15 full English seasons that his career spanned, Binks made 50 or more dismissals in 13. His best season was 1960, when he had a total of 107 dismissals (96 catches, still a First-Class record, and 11 stumpings).

Here is a comparative study of the 11 instances of a wicketkeeper making 100 or more dismissals in an English season:

Gary Watton mentions an unusual coincidence in the names of the Yorkshire wicketkeepers from 1955 till date; all of them have names beginnings with the letter B, as follows: Binks, Bairstow (David), Blakey, Brophy, and Bairstow (Jonny).

Although slightly taller than the average wicketkeeper, his keeping was as immaculate as can be imagined. Let us hear about it from Chris Waters in the Yorkshire Post: “Binks was another whose zest and passion for the county was part of the package, pure second nature. Against all types of bowling, Binks’s handling was immaculate. Very much an attacking wicketkeeper, he was as comfortable standing up to bowlers of the pace of Tony Nicholson and Bob Platt as he was standing back to the searing speed of Fred Trueman. So expert was Binks’s timing and movement behind the stumps, he suffered only one injury: a broken finger in 1966. Most wicketkeepers retire from the game with all sorts of marks and indentations on their hands, but not Binks.As the Yorkshire batsman Ted Lester memorably observed: ‘He could have come straight off the field and played the piano’.”

This brings up another interesting issue about the role Binks played in the all-conquering Yorkshire teams of the past — his remarkable partnership with the fiery, and often unpredictable, Fred Trueman. Let us examine the statistics of the dismissals by some famous wicketkeeper-bowler combinations in First-Class cricket, from a set of figures very kindly shared by Charles Davis of Melbourne:

Dawkes had a hat-trick of dismissals off Jackson against Worcestershire at Kidderminster in 1958.

Here is a brief portrait of the personnel of the famous Yorkshire teams of the 1960s from Cricket: The Game of Life: Every reason to celebrate by Scyld Berry: “Brian Close is Yorkshire’s captain and man-manager, and perhaps the bravest man who ever faced fast bowling or stood unhelmeted at short-leg. Raymond Illingworth, soon to become England’s foxiest captain, is in charge of tactics… Fred Trueman opens the bowling with a perfect side-on action; Jimmy Binks keeps wicket as a butler takes care of the silver; Phil Sharpe conjures at first slip; Ken Taylor is swift or Geoffrey Boycott safe in the covers; John Hampshire bends at short-leg to scoop up catches with a blacksmith’s forearms.” It was a happy and contended bunch of cricketers,confident, and revelling in one other’s strengths.

The Binks-Trueman combination was seen in a different light against Middlesex at Lord’s in June 1964. Middlesex were 251 for 7 at stumps on Day 1, wicketkeeper John Murray batting on 61 and Don Bennett on 30. Next day they declared at 279 for 9. Trueman took 3 for 64 and Don Wilson 4 for 76.

In came our Fred and thrashed (there is no other word for his onslaught on the bowling) a quick-fire 54. Binks achieved his highest First-Class score of 95 in this innings. The innings folded at 331 — a lead of 52. There was some late excitement when Middlesex were reduced to 96 for 8, when the rain-affected game ended in a draw.

In his long association with Yorkshire, Jimmy Binks played 412 consecutive matches for Yorkshire, an outstanding record that is never likely to be beaten. Out of the 492 matches Yorkshire played during Binks’ career he missed only one, not through injury or bad form, but simply because he was selected for n MCC to play Surrey at Lord’s in May 1964 at the same time that Yorkshire were playing a county game.

His long innings ended with his last First-Class game, for an International XI against Yorkshire (surely a heartbreaking experience for him) at Scarborough in September 1975. Binks scored 15 and 12 not out, and held a catch.

Binks was on the Yorkshire tour of North America and Bermuda, a private tour, in 1964, playing largely light-hearted cricket. In 1967, Yorkshire County awarded him a benefit from which he earned £5,351, as a token of appreciation from the adoring fans for his long service and his no-frills brand of efficiency, bereft of all flamboyance.

In his book Magnificent Seven: Yorkshire’s Championship Years, Andrew Collomosse says: “Jimmy worked for a hydraulics company in Hull (JH Fenner) but became disillusioned with living in Britain in the 1970s. When the chance came to work in the same line of business in America, he took it, moving to Iowa at first and then southern California (to work for Stone Hydraulics).” This move was in the late 1970s.

While in USA, he began feeling more than a little homesick for the home cooking of his native Yorkshire. American supermarkets did not stock mushy peas or the type of custard he preferred, while wife Jean just could not get her Yorkshire puddings to rise in the baking tins available on the other side of the Atlantic.

Thankfully these domestic problems have now been sorted out with the help of his Yorkshire friends. 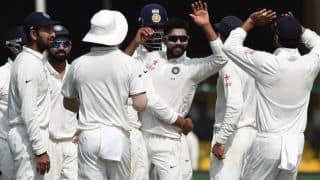