In the left, we see New Zealand all-rounder Jimmy Neesham. He made his debut in the second Test against India at Wellington in 2014 and scored 137. It also became the highest score on debut by a number eight batsman in Test cricket.

The lanky all-rounder later became the first New Zealander and eighth player overall to score hundreds in his first two Tests. Making his One Day International (ODI) debut in 2013, Neesham has played 16 ODIs for New Zealand and remains a popular franchise player in the Twenty20 leagues around the world. In the seventh edition of Indian Premier League (IPL), the 24-year was picked up a part of Delhi Daredevils.

On the right is Neesham’s lookalike, Per Mertesacker, who plays for Arsenal in the Barclays Premiere League. The 30-year-old has appeared in 104 internationals for Germany and retired in August 2014 after his team won the World Cup under manager Joachim Loew. His aerial presence made him a prominent figure in German team in his hey days. A youth product from Hannover 96, the centre-back has become an indispensable figure for English giants Arsenal after coming from Werder Bremen. 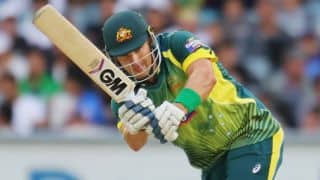