From a geeky debutant to amongst the best, the India completes a circle in Root's career. How he fares will determine the English fortunes.

December, 2012. It was a do-or-die Test for India at Nagpur. The track was slow and dead for strokeplay, which prompted the then Indian skipper MS Dhoni to conclude that a draw would still be the result even if the Test dragged till the (non-existent) eighth day. Kevin Pietersen was sure that this was the toughest pitch to score on. England elected to bat but were reduced to 16 for 2. Alastair Cook, England captain and hero of the series so far, was removed early. England were crawling at below two an over. At the stroke of tea they were in a perilous position of 119 for 4, when the 21-year-old debutant from Yorkshire Joseph Edward Root walked out in an unfamiliar position. The scorecard entry for batting read Joe Root 0 (0), Kevin Pietersen 64 (164).

Four years later, Root, 25, finds himself in the shoes of Pietersen as England eye a repeat of 2012-13. Rewind to Nagpur 2012 again. Everything had seemed fine till Ahmedabad when the hosts thumped to a 9-wicket win to go one up. The question was: Would India effect a 4-0 whitewash and avenge England of 2011? No. England bettered the Ahmedabad result in the second Test at Mumbai following a win by 10 wickets. After Kolkata, the scoreline read 2-1 in favour of the visitors. The Indian ego had been deflated. At Nagpur, the onus was on India to win the Test and salvage some pride by levelling the series. India were not used to such humiliation at home.

I mentioned the phrase ‘unfamiliar’ position. Prior to his Test debut, the prefix, or let us say, Root s identity was ‘Yorkshire opener’. Statistically, in English County cricket, he was no Marcus Trescothick, Mark Ramprakash or his county mate Michael Vaughan. The average lingered in the mid-30s. At No. 6, against a three-man Indian spin attack (unfamiliar again) and on a sluggish surface, Root seemed to be at ease. A well-timed front-foot drive off Pragyan Ojha off the 10th ball he faced, reassured that we were not looking at an ordinary cricketer.

There have been younger players to have played Tests for England but not sure if there were cricketers who looked younger. At 18, fellow Yorkshireman Brian Close remains the youngest to play for England. Close has never looked the Root-young.

It seemed as if a boy had just been ferried out from school to play Test cricket, but Root responded with a patient 229-ball 73. He played well with the tail and ensured England to 330. The time consumed by him at the crease added to the draw bit.

Root happens to be from the Ian Bell category, one who was identified much early as the ‘next big thing’. In a different role, with a mediocre record, the schoolboy-looking young man was thrown into a ring called ‘Test’ cricket. Four years on, let us laud English cricket for the farsightedness.

Had this been Game of Thrones, Ser Root would be a prodigious young knight representing House of White Rose. He has let the Yorkshire flag fly high. Since Root’s debut till date (as on November 3, 2016), here are the list of most run-getters in Tests.

The man who had punched Root at a Birmingham bar and got banned stands second in the list. Amidst the pub brawl, quick wit and ready sense of humour to the rise to stardom, Root has emerged as the ‘root’ of English batting. Since debut, he has been the most prolific run-getter in Tests and the young man has never shown any hindrance when the need has been to experiment with the batting order.

Very good of the Aussie lads to come across for a drink and enjoy whats been a great series #rumbleintheashes pic.twitter.com/ebheQtsNr8

From opening to batting at every position from three to seven, Root has done all donning the same carefree attitude. Root was well-settled at No. 4, the batting position of batting stars. Earlier this year, he replaced Nick Compton at No. 3; the challenge was different considering the side’s opening woes since Andrew Strauss’ retirement.

In the second Test against Pakistan at Old Trafford, Root’s 254 helped the Englishmen stage a comeback in the series and level it 1-1. Does this mean he cherishes the No. 3 slot? Let us put it this way: Root relishes challenges. He thrives for self-betterment, which is why once Cook’s captaincy days are over, the leadership hat will by default fall upon him.

Root averages close to 38 as opener. He has cherished the No. 5 slot the most, a position where he scores at over 73 but for team demands he is ready to bat at No. 3. He can bat well with the top order; the same time he can guide the tail. Two years back, against India, Root and James Anderson were involved in a record last-wicket partnership of 198.

The following season, in West Indies, on a difficult track, Root was caught in a rare furious act of smashing his bat on the ground. No, he had not been dismissed for a duck. Root wanted to stitch another partnership with Anderson but a silly run out had ended the English innings. Root was forced to end his innings at 182 not out. Missing a double-ton that dangles in front is heartache. Ask Sachin Tendulkar, who was once left stranded at 194 when Rahul Dravid infamously declared the innings at Multan.

On his way back Root did acknowledge the crowd; however, more than the double-hundred it was not extending the lead that disappointed him. He can drop anchor when needed, but here his strike rate was touching 80! The outfield was not the quickest at St George’s and he relied more on twos. The knock at brisk pace ensured England finished the win in the final session of Day Five.

Root is a prankster:

Root knows that alluring fifties do not win Tests but big knocks do. Out of his 10 Test hundreds, 5 scores are above 150 in addition to a 149 not out. Root is hungry, intelligent and a rarity in English cricket besides Pietersen, someone who has adapted to all three formats with relative ease, which makes him one of the finest batters in the world.

Root did not get going against the Bangladesh spinners and that is a concern. However that has to do more with form than ability. Root was at ease on debut at Nagpur, and had good outings against the strong Pakistan spin attack in UAE.

It has been eight years and three series since England had last lost to India. If they have to continue the run, the Yorkshireman will have to make this series his own.

In England’s last tour of India, Cook topped the batting charts with 562 runs at 80.28, but Pietersen contributed with 338 runs at 48.28. If Cook was solid, KP was flamboyant and scored briskly.

If Cook produces three-fourth the brilliance he did four years back and Root manages to replicate KP, it will a job ‘well-done’ for English batting who are up against the No.1 Test side at their own backyard. Mind you, Ravichandran Ashwin has the ticked off the checklist consisting of AB de Villiers, Kumar Sangakkara, Hashim Amla and Kane Williamson. Root and Cook are two names he is itching to tick off.

“Kohli is as good as it gets. He is right up there. Root has good numbers, but it is unfair to even compare Joe with Virat because his numbers are just phenomenal. He [Virat] plays so aggressively, sometimes it is like: are you serious? The way he makes big runs for his team so often is just remarkable,” said the exiled Pietersen ahead of the much-awaited Test series.

When it comes to limited-overs cricket, Kohli has the edge for his phenomenal consistency. Root has good numbers too but Kohli has become the benchmark. But KP’s hypothesis is questionable when it comes to Test cricket.

Both have played exactly the same number of Tests; and the numbers say a lot. Kohli has scored more hundreds. Two very similar batsmen from their respective sides, one who resembles the teenager next door and the other an epitome of machismo, both lynchpins of their respective batting line-ups: the comparisons will stay throughout the series.

Root, the run-machine will have to be well oiled for the production but that is not it. His off-spin will play a role in favourable conditions, as will the picks from his smart brain for Captain Cook’s assistance.

Not to forget, Root is the leader when it comes shining the ball. He is the chief of the lot who shine the ball before returning it to the bowler. In conditions favourable to reverse-swing, his role here will be again the key.

He licks his fingers before applying the saliva on the cherry, which became the centre of reason for his stomach bug during the Dhaka Test. One can only hope that in order to conquer Delhi, the whiz kid does not encounter Delhi belly.

From a geeky debutant to amongst the best, the India completes a circle in Root’s career. How he fares will determine the English fortunes. 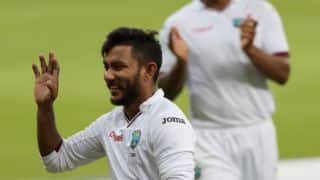