Here are some intriguing statistical highlights from day one of the first Test between India and England at Rajkot.

The first day of first Test between India and England at Saurashtra Cricket Association Stadium of Rajkot ended in visitor’s favour. The day started with the toss, which Indian captain Virat Kohli lost and eventually, England skipper Alastair Cook, chose to bat first. From England side, Haseeb Hameed got to make his Test debut. The start for England was quite decent thanks to three catches being dropped at slip by Indian fielders in first six overs of the match. Further, Indian spinner Ravindra Jadeja scalped the first wicket in the form of captain Cook and soon, Hameed followed the same fate as he got out against the wily spin of Ravichandran Ashwin.

Later, Ben Duckett too departed after scoring only 13. From there on, Joe Root and Moeen Ali did the rescue job by building match-changing partnership of 179 runs for the fourth wicket. Root got out to Umesh Yadav after scoring an impressive 124, while Moeen remained unbeaten one short of his ton at the end of day one. England posted 311 runs on day one with the loss of four wickets and will resume their batting on the second day with Moeen and Ben Stokes at the crease. From this interesting first day of the first Test, we present you some interesting numbers.

124 runs scored by Joe Root his first ton in Asia. Root’s previous highest score in a Test in Asia was of 88, which he scored against Pakistan at Dubai in October 2015. Also, his strike-rate of 68.88 is surely a notable thing.

At the age of 19 years 297 days, Haseeb Hameed becomes fifth youngest Test player for England. Also, he becomes the youngest English player to open the batting in his debut Test after Len Hutton, who did that at the age of 21 years three days.

9th fifty plus score for Root most by any batsman in this year. Root beat his teammate Jonny Bairstow in this criterion.

100th Test for Stuart Broad he becomes 14th English player to reach this landmark in Tests. Before Broad, the latest entrance in this club from England side was Ian Bell, who played his 100th Test in 2015.

1,110 runs for Root the second batsman to score more than 1,000 runs in Tests in this year. He is currently standing at the second position in this criterion behind Bairstow, who has scored 1,118 runs so far.

11th Test ton for Root second most number of centuries by an English player by the age of 25. Cook has most centuries in this criterion with 15 centuries to his name. This was the also the first hundred by a visiting batsman since Michael Clarke’s 130 at Chennai in February 2013. It has been 12 Tests since Clarke’s century in India.

England goes past 300 this is the first such instance by a visiting team since March 2013 at Mohali, where Australia scored 408.

179 runs were added by Root and Moeen for fourth wicket partnership fifth highest four-wicket partnership by an English pair in India. The record for highest partnership in this criterion is held by Paul Collingwood and Andrew Strauss, who added 214 runs at Chennai in December 2008.

31 overs and just two wickets for Ravichandran Ashwin! This is one of the worst spells for Ashwin in Tests in Asia. Last time when Ashwin bowled more than 30 overs and scalped two or less wicket was in March 2013 at Mohali against Australia. 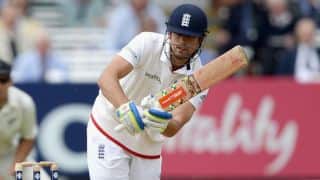 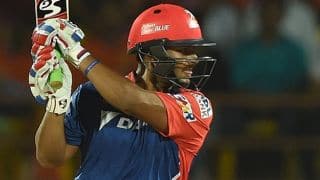