John Buchanan: One of the most successful coaches in sport history

John Buchanan: One of the most successful coaches in sport history

Born on April 5, 1953, John Buchanan is one of the most successful coaches in the world. He has led the Australian cricket team to two World Cup wins and boasts of a phenomenal win percentage. However, Buchanan was never appreciated enough for his deeds. Jaideep Vaidya has more. If statistics were to be the only criteria, John Buchanan (above) is the most successful coach in any sport in the world to date. His winning percentage, Tests and ODIs combined, is a staggering 79.83, which is even more than that of Vince Lombardi (73.80) — considered one of the greatest sports coaches in history — and miles above Sir Alex Ferguson (58.02), a modern-day great © Getty Images

John ‘Buck’ Buchanan, born on April 5, 1953, is statistically one of the most successful coaches in the world across all sports. However, even with a phenomenal win percentage and an overflowing trophy cabinet with the Australian cricket team, Buchanan was never quite appreciated as much as he would have deserved. Jaideep Vaidya tries to figure out why.

The idea of a coach in world cricket is a modern phenomenon, as recent as the last quarter of a century or so. Unlike other team sports such as football, where the coach or manager have the utmost authority and last word in all matters, cricket is a game where the captain was, and still remains, the one who holds the reins of the team. Ever since the inception of the sport, the role of a coach would be restricted to the early developing years of a cricketer, and never transcend into professional cricket. Coaching was always considered as putting some sort of restraint on the natural ability and inbred talent of a professional cricketer.

This anti-coach mindset was even more prominent Down Under. Fred Spofforth, the legendary ‘demon bowler’ of the early 19th century, wrote: “In Australia, boys learn by watching each other and any grown up cricketers who they see. The result is individuality, and their natural ability is not dwarfed by other people’s ideas.”

Thus, when Bob Simpson was appointed as a full-time coach of the Australian team in 1986, the decision was met with much cynicism. “The captain is 95 per cent important, the coach is five per cent important,” said Ian Chappell in 2007, according to the Herald Sun.

Shane Warne, another self-proclaimed old-schooler, went a step further: “Coaching is for 12-year-olds and not international cricketers,” he told reporters in India recently.

But then again, Warne’s disdain was directed more towards a certain coach, than the idea of one. More on that later.

While Simpson’s appointment was more due to the lack of a leader figure in the side, with the Australian team trying out four captains in the five preceding years, the post became a permanent one as the years passed by. Geoff Marsh was to succeed Simpson in 1996 and went on to lead the team to a World Cup triumph in 1999. Then, it was the turn of a certain John Buchanan, relatively unheard of in international circles.

The then 46-year-old Buchanan’s profile read a coaching qualification from the Greg Chappell Cricket Centre and a degree in Human Movement from the University of Queensland. He had coached Queensland for five years and led them to their first-ever Sheffield Shield title in 1994-95. He also had stints in England with Oldham, Cambridgeshire and Middlesex. However, in terms of an actual playing career, Buchanan had featured in all of seven First-Class games for Queensland, scoring just 160 runs. It was, thus, inevitable that Buchanan’s appointment as Australia coach was met with a considerable amount of scepticism.

How could someone who has played just seven First-Class matches be expected to mentor a World Cup-winning side?

Buchanan, on his own part, would later put it down to “ignorant criticism” of his role within the Australian setup. “I always believed it was an advantage that I didn’t carry a lot of baggage as a former player,” he would tell the Guardian in 2009. “If I need to look at things with cricket eyes I will. But, generally, I look at things differently.”

Taking over after World Cup ’99, the Australian team immediately felt the impact of Buchanan’s school of coaching. “He set about challenging our thoughts and ideas,” wrote Damien Fleming in a column for the Sydney Morning Herald. “He asked a lot of questions, such as what was our vision. What sort of legacy did we want to leave as a group? In one of our first meetings, he had already drawn a pyramid with a four-year plan all about peaking for the World Cup final in 2003.” Buchanan was thus more a mental conditioning trainer and a thinker, than being a cricket coach. He always suggested innovative techniques that challenged age-old traditions, such as scoring briskly in Test matches, setting aggressive fields in One-Day Internationals (ODIs) and banishing the nightwatchman. “We talked about always being ruthless and how complacency was our enemy,” wrote Fleming of his former coach, who the Australian team had christened ‘Flanders’, due to his uncanny resemblance with Homer Simpson’s neighbour.

Come to think of it, Australia’s belligerent domination of world cricket through a major part of the noughties has Flanders written all over it. Under him, Australia won two World Cups, a staggering 70 of 89 Tests and lost only six ODIs out of a total of 35. They won three Ashes series and conquered their final frontier in 2004 when they beat India in India after a gap of 36 years. His winning percentage, Tests and ODIs combined, is a staggering 79.83, which is even more than that of Vince Lombardi (73.80) — considered one of the greatest sports coaches in history — and miles above Sir Alex Ferguson (58.02), a modern-day great. If statistics were to be the only criteria, Buchanan is the most successful coach in any sport in the world to date. 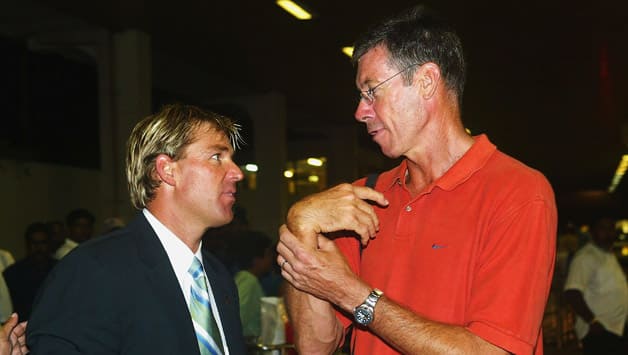 The last straw in the frosty relationship between Shane Warne (left) and John Buchanan was the infamous boot camp preceding the 2006-07 Ashes. Warne said, “These bootcamps are a big waste of time. We were forced to push a car uphill, and after a bit I just turned to the coach and said, ‘I’m as weak as p***, I hate your guts and I want to go home. You’re a d***head.’ ” © Getty Images

But was Buchanan indeed such a great coach? Or was it that he had just inherited a world-beating side and was living off their glory? In the end, it depends which side of the fence you’re standing on. But the ones siding with the Chappell-Warne school of thought far outnumber the Buchanan backers. Warne was particularly not fond of Buchanan, especially after the former’s drug scandal in 2003. Buchanan had called Warne “vain, stupid and self-centred”; Warne countered saying that Buchanan was “living in pixieland”, that the Australian team had to put up with his “verbal diarrhoea” and that he was a “goose” who “lacked common sense”. The snidest of public comments came when Warne quipped, “I’m a big believer that the coach is something you travel in to get to the game.”

The last straw in their relationship was the infamous boot camp preceding the 2006-07 Ashes. “These bootcamps are a big waste of time,” said Warne, according to the Daily Telegraph. “We were forced to push a car uphill, and after a bit I just turned to the coach and said, ‘I’m as weak as p***, I hate your guts and I want to go home. You’re a d***head.’”

Buchanan, credit to him, was remarkably composed in his reply to Warne, saying, “In the end, Shane and I disagreeing over issues is no news, is it? I’ve always said one of the healthy things in the Australian cricket team was the difference that existed between everybody.”

Gideon Haigh perhaps best summed up their relationship in his latest book, On Warne, “Warne and Buchanan were never destined to be on the same page; they were hardly in the same book.”

But Buchanan did have some people in his book. Steve Waugh was one, who as captain of Australia, had gotten along well with his coach. Waugh wrote in his autobiography, Out of My Comfort Zone, “I saw him [Buchanan] more as a ‘performance manager’ than a coach, in that he would address a variety of issues, many not necessarily cricket related, and would endeavour to have each player prepared for his cricket with a clear mind so that the actual playing side would be easier. With Buck and me on a similar wavelength, both of us wanting to provoke, stimulate and challenge the members of the team to be the best they could possibly be, we set about putting a healthy work environment and a strong framework in place.” 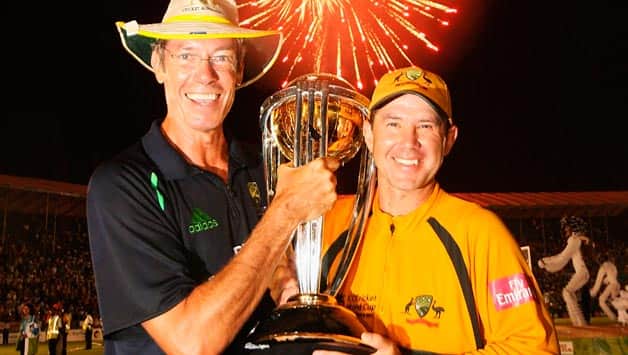 Waugh’s successor in captaincy, Ricky Ponting, also had kind words for his mentor, with whom he plotted Australia’s 5-0 whitewash of the Ashes in 2006-07. While Warne believed that the “Australian team I was part of hardly needed a good coach. Even my 13-year-old son could decide when to bowl [Glenn] McGrath, [Brett] Lee or [Jason] Gillespie”, Ponting said, “Yes, we are a very talented bunch of players, but talent doesn’t win you everything. He’s been responsible for getting the best out of me, out of Langer, out of Hayden, out of Steve Waugh to a certain degree. Who knows, even out of Warney, McGrath.”

So, that is John Buchanan for you — a man who would care less what the world thought of him as long as the job gets done, even if he is made the villain. He was someone who always questioned current practice and did not “necessarily accept the way cricket has been played or cricketers have played it.” His innovative methods may not have always worked, like the Kolkata Knight Riders (KKR) debacle in 2008-09, but as he himself says, “If all you were was successful, you’re never going to learn anything.”