Gleeson rose and fell with Bill Lawry s captaincy, playing 23 of his Tests under The Phantom, peaking in the West Indies series at home in 1968-69.

Despite his Jack Iverson-like two-finger grip, John Gleeson never attained the cult status of his illustrious predecessor. Neither was his grip considered photograph-worthy, let alone book-cover-worthy, and rightly so for Gleeson s Test numbers were not among the greatest. For a while he was difficult to pick, but once they managed to decode his bent-finger grip they did not have a problem playing him. The bowling average, once in the mid-20s, rose past the 30-mark before he finished with 93 wickets from 29 Tests at an unimpressive 36.20 and a strike rate of 95.2: all that happened in a career that lasted less than five years.

Unfortunately, he could never come out of the shadow of Iverson. In fact, when he first faced Gleeson in the nets, Barry Rothwell told his New South Wales colleague Richie Benaud that Gleeson was bowling Iversons . There were rumours that Gleeson s right hand was insured at A$10,000 when he left for the South African shores in 1969-70.

Gleeson himself admitted to being influenced by Iverson, or rather, by the much-photographed grip in a magazine. He was barely in his teens at that time, but his mind had been made up. Unfortunately, he did not have Iverson s height, and had to rely on a long run-up to gain enough momentum to bowl at reasonable pace (which was necessary, given his grip).

Had Gleeson played today, however, he would probably have been more successful. In that era a batsman could not be give leg-before if he was struck outside off, which meant they stretched his pads outside off, leaving them alone: even if it was the googly they were safe.

He took his revenge on EAS Prasanna on the 1969-70 tour of India. Chasing 200 the Australians were reduced to 53 for 8 in the tour match against South Zone (Prasanna took 6 of these and finished with 14-10-11-6). Gleeson came out to join Bill Lawry and padded everything away. The fuming spectators pelted stones as Lawry and Gleeson ran for cover. The match came to a premature halt.

Gleeson finished that tour with 22 wickets at 25.45. The 3 Tests got him 10 wickets at 34.70. Australia would not win another Test series on Indian soil in another 35 years.

The tour featured a curious incident involving Gleeson. In the match against North Zone, Akash Lal and Vinay Lamba thwarted Gleeson for some time. Gleeson and wicketkeeper Brian Taber appealed for an edge against Lamba, but umpire Har Sharma turned it down. Gleeson appealed again, and again, as loudly as he could, with all ten teammates joining in: Sharma gave Lamba out.

Note: Ian Chappell mentioned the incident in his autobiography, adding that Sharma later apologised to our hero: Oh, Mr Gleeson, I am sorry to have taken so long over that decision but there was a strong wind blowing against me and it took a long time for the snick to carry to my end.

Gleeson rose and fell with Lawry s captaincy, playing 23 of his Tests under The Phantom, peaking in the West Indies series at home in 1968-69. He got 2 for 72 and 5 for 122 at Brisbane and 1 for 49 and 5 for 61 at Melbourne in consecutive Tests. His other five-wicket haul was special: at Johannesburg in the disastrous South Africa tour of 1969-70 he shone alone with 3 for 61 and 5 for 125, waging a lone battle as Lawry s men succumbed to yet another massive defeat.

Gleeson was one of the very few high points for Australia on the tour (Alan Connolly and Ian Redpath were the only others). His 19 wickets came at 38.94 (worse than his career average, actually), but it had more to do with being up against one of the greatest batting line-ups of all time.

Gleeson was named a South African Cricket Cricketer of the Year a fair return for a man with an insured hand. He returned to the country in 1974-75 to play Currie Cup for Eastern Province in his final First-Class season.

He also played a small part in cricket history, albeit unknowingly. In the 1968 Ashes Test at The Oval, Barry Jarman dropped Basil D Oliveira off Gleeson on 31. Thus reprieved, D Oliveira went on to score 158 as England clinched the Test and levelled the series. D Oliveira had to picked for the tour to South Africa, which got cancelled, and ended in a two-decade ban for South Africa from international cricket.

He hailed from a dairy-farming family. Those long days of milking cows is generally cited as the reason behind his extremely strong fingers, which gave him ability to turn his leg-breaks with one of the most unconventional grips. He hoodwinked them at First-Class level all right, his 430 wickets coming at a remarkable 24.95. This, despite having started playing grade cricket as a wicketkeeper.

A quiet, reserved man, Gleeson rarely socialised with his colleagues outside matches. In fact, he often took a flight (if there was one available) immediately after the match. This earned him the nickname CHO (not Cho) an acronym for cricket hours only .

That acronym would have held for Don Bradman as well, one of the first to spot Gleeson s talent. In his earlier days, when New South Wales captain Brian Booth relegated Gleeson to 12th man, Bradman had famously responded with that s the first mistake you ve made. That same season Gleeson toured New Zealand with what would have been called Australia A today: his 25 wickets on that tour came at 27.48 apiece.

After retirement Gleeson was a part of the original governing committee of Kerry Packer s World Series Cricket. 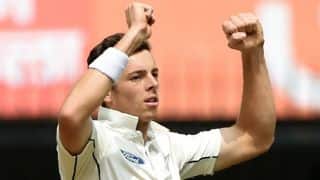