John Minshull was a slow mover in the field and had a tendency towards injury and illness.

August 31, 1769. John Minshull, sometimes referred to as John Minchin, scored the first recorded hundred in cricket. Given the lack of documentation, Abhishek Mukherjee tries to relive the historic day at Sevenoaks.

We go back to 1769, when John Frederick Sackville, Third Duke of Dorset (in Kent) and owner of Knole House, ruled over Sevenoaks. An extremely keen cricket enthusiast, Sackville (who had become Duke on January 3 earlier that year) formed his own cricket team.

Let us not forget the Dukes of Dorset. John Frederick s father John Philip Sackville played for Kent against an all-England side in 1744, and was a great patron of the sport. John Philip s son-in-law Sackville Tufton (9th Earl of Thanet) was a First-Class cricketer, as were his brothers, John and Henry. Henry Tufton (11th Earl of Thanet, MP of Rochester and Appleby), in fact, was a more than competent wicketkeeper.

Cricket, still in her nascent stages, had spread to Kent by the 1760s (but then, did Prince Edward not play creag a sport believed by some to be the predecessor of the sport we love in Kent in 1301?). Hambledon Cricket Club, Hampshire was very new at this stage; MCC had not been set up; bowlers rolled (trundled) the ball along the ground (overarm bowling was out of the question); and there were only two stumps.

It was around this time, in 1769, that eleven men from Wrotham, a village in Kent about 150 miles from Dorset, to play the Duke s XI. The Vine Cricket Ground, scheduled to host the match, is generally believed to be a former vineyard for Archbishops of Canterbury.

The Duke himself opened batting with a man with a scoreboard entry Bishop against his name. Whether it was his name, or whether he was a bishop, is not known. Batting at No. 3, John Minshull (sometimes called John Minchin for reasons unknown) top-scored with 18; The Duke and the No. 4 batsman Pattenden scored 12 each; unfortunately, nobody else reached double-figures, and the locals were bowled out for 68.

Who was John Minshull?

Minshull was born somewhere in England in 1742, so we can presume he was 27 or thereabouts during the match. Early Kent Cricketers described Minshull as a thick-set man, about 5 9 in height, rather a slow mover in the field (and had) a tendency towards injury and illness.

John Nyren, in The Cricketers of My Time, remarked that Minshull was a capital hitter, and a sure guard of his wicket ; he was also not an elegant player, his position and general style were both awkward and uncouth . He had his shortcomings too.

Nyren added that Minshull was as conceited as a wagtail and from his constantly aping what he had no pretensions to, was, on that account only, not estimated according to the price at which he had rated his own merits.

At the time of the match Minshull was employed by The Duke as a gardener at Knole House. In First, Last & Only: Cricket Paul Donnelly mentioned that Minshull was paid eight shillings a week. This was also his first recorded match, but given that The Duke (who was presumably the captain of his side) to bat at No. 3, one can safely assume that he had some credentials.

If Wrotham s first innings score had been documented, it is not available anymore. The Duke and Bishop opened again, the former scoring a formidable 14. This time only four men were dismissed for single-digit scores. In fact, Pattenden (24) and S Bartram (23) went past the 20-mark.

These scores would not seem big today. Let us quote Martin Williamson of ESPNCricinfo as to what playing conditions used to be like: It was an era where it was relatively rare for a team to reach a total in excess of 100, and a batsman who got into double figures was considered to have done well. Pitches were little more than an area selected on a field that would have been kept in trim by sheep. The playing surface would have been uneven, and bats were unsprung and little more than carved wood.

Seven batsmen crossing ten in an innings was no joke, but Minshull eclipsed them all. He ran 34 singles, 15 twos, 9 threes, and 4 fours for there was no concept of a boundary on his way to 107. It was the first recorded hundred in any form of cricket.

However, it was not necessarily the first hundred. As Gideon Haigh wrote in Silent Revolutions, When we talk of cricket history, in fact, we are by definition describing that which is documented. It s possible, for example, that centuries were compiled before John Minshull s 107 for The Duke of Dorset s XI against Wrotham in 1769, but they went either unscored or unretained.

It was also the earliest match where a stroke-by-stroke record of an innings can be found. The Wrotham second innings score was not recorded; neither was the result of the match.

– The three matches played by Duke of Dorset s XI (all against Sir H Mann s XI) were given First-Class status.

– The Duke later played 23 First-Class matches, scoring 434 at a competent 10.33. He also claimed 24 wickets. The highlights of his career included a four-wicket haul (all bowled) for all-England against Hampshire at Hambledon in 1793. He also donated Vine Cricket Ground to the village of Sevenoaks four years after the historic match.

– Playing for Hampshire, John Small (opening batting with The Duke of Dorset) registered 136 against Surrey at Broadhalfpenny Down, Hambledon, in 1775. Hampshire won by a humongous (for a low-scoring era) 275 runs to set a new benchmark. Interestingly, Minchin played for Surrey in that match, scoring 7 and 2. Small, a bat-manufacturer, was also probably the first to use a straight bat in favour of the curved bat.

– Two years after Small s feat, James Aylward set a new record by scoring 167. Both Minshull (60 and 12) and Small (33) played the match, where Hampshire beat all-England by an innings and plenty. It was surprising that the record was broken twice in a span of two years, and in both cases the existing record-holders were playing the matches.

– The hundred was not the only first in Minshull s career. Playing for All England against Hampshire at The Vine in 1773 he became the first known batsman to be dismissed hit wicket. He achieved that while not being on strike. 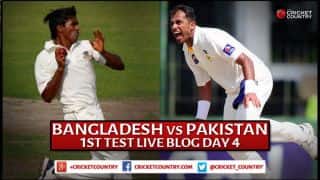