After the 1949 tour of England as the baby of the team, Reid had fallen in love with the country.

John Reid, the great New Zealand all-rounder, played three seasons of Central Lancashire League as a professional for Heywood. Arunabha Sengupta recounts the one moment of hilarious yet murky glory of his otherwise glittering career.

“The club professional in league cricket is a cross between a robot in perpetual motion and a sort of second in command to the mayor,” says the superb New Zealand all-rounder John Reid in his sparkling autobiography Sword of Willow.

A prodigious talent shaped much of the tale of New Zealand cricket. However, he was too great a performer for his deeds to remain restricted in the constrained confines of the island’s slowprogress as a cricketing nation. Like many of the leading names of the 1950s he sought success and self-expression in the demanding domain of the Lancashire League.

Those days each club had its professional cricketer, and many boasted famous ones. Frank Worrell, Sonny Ramadhin, Cecil Pepper, Colin McCool, Charlie Barnett, Vinoo Mankad, George Tribe, all were to be found playing on Saturday afternoons, and many agreed that the toils of that one day taxed more than the labours of a five-day Test match.

As a superb hitter of the ball built on top of a sound technique, and a brisk fast medium bowler to boot, Reid was ideally suited for this role. He plied his trade for Heywood, and confesses that he did more than turn out for the club. He opened functions — from vegetable shows to repertory, presented prizes in schools, spoke as distinguished guest in hundreds of gatherings, and even kicked off a women’s soccer match. This was apart from opening the bowling and often continuing through the entire innings, and being expected to score runs always.

But, those seasons of 1952, 1953 and 1954 were filled with warm and fascinating experiences. After the 1949 tour of England as the baby of the team, Reid had fallen in love with the country and dearly wanted his wife to share the joys that the land had to offer. It was rewarding too. He started with a contract salary of £750 which was extended to £1,200 by the final season. Besides, the hat went around for collection every time he took five wickets for less than six runs apiece or scored more than 50. Ten per cent of the takings had to be paid to the club and the rest went to the player.

Reid pocketed plenty of such collections. In 1952 he scored 982 runs at 42.89 and captured 114 wickets at 10.23. The next year the numbers were 868 at 41.3 and 85 wickets at 9.7. In 1954, he got 1373 runs at a staggering 76 and 100 wickets at 10.54. That was the season when he captured ten for 17 against Oldham, and as the wickets fell, many of the crowd started leaving guiltily for the gates before the hat came around. The tenth wicket was taken just as the last Oldham spectator was legging it. The poor man was apprehended by a teammate and made to cough up the six pence.

Thee can’t bowl as well as that

However, perhaps the most hilarious experience occurred in a match at Castleton Moor. It was going on even as twilight was on them and lights were on in the pavilion at ten minutes to nine. The eyes strained to catch the action in the middle while the batsmen appealed against the light incessantly.

As Reid prepared to bowl, the umpire once again responded in negative to the pleas of the batsman. The Kiwi star bowled full and straight and the stumps were uprooted. The batsman grumbled all the way back and the one who took his place immediately appealed against the light. The umpire insisted that he must play a ball first. Reid himself strived to see the stumps through the gloom, but sent in another straight one to make them tumble again.

By then there was no doubt in his own mind that the batsmen could not see a thing. The Castleton crowd voiced quite clearly that they were of the same opinion. “Go home you Kiwi mug,” they bellowed. The next batsman stumbled in, and there followed the much expected appeal. Once again the umpire’s verdict was negative. Thou shalt face a ball, was the approximate summary.

Reid bowled again, this time carrying the yoke of an uneasy conscience, sending it down a lot slower. Yet, it went through straight and the batsman had no chance. The bat swished all around it and the stumps were hit again, resulting in a murky, dubious hat-trick. Now, as the batsman walked back, the aged face of the umpire slowly turned towards the bowler and the eyes glowered. The voice rang out, “Thee can’t bowl as well as that. Light moost be baad.” And so saying the man took off the stumps and marched from the field.

It remained Reid’s special moment of doubtful glory in a sparkling career. 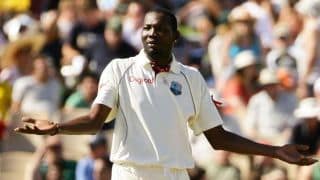