The laws of cricket were already in place, but under-arm bowling was the prevalent form. The likes of Lumpy Stevens, the first great bowler in history, had ensured that underarm bowling was an art worth pursuing. Round-arm bowling was banned in 1816. Then, on July 15, 1822, John Willes of Kent had a go at round-arm bowling at Lord s, no less, and was no-balled. A fuming Willes left the ground immediately. Abhishek Mukherjee looks back.

Before I start describing the dramatic proceedings of that day at Lord s, let me first narrate a few relevant aspects of bowling. Bowlers almost invariably bowled under-arm till the end of the 18th century.

There were reasons for this. Cricket grounds were very few in number, and almost invariably ill-maintained. Sheep were used to clear the grass to make pitches, and scythes were used as mowers. As a result pitches were invariably uneven and bumpy, which often made batting dangerous.

In other words, over-arm bowling was not required.

It must also be taken into consideration that cricket of the era were dominated by amateurs, almost all of whom were batsmen. They obviously did not want batting to become difficult.

But as has always been the case, cricket found a way to evolve. Tom Walker was a stonewaller for Hambledon with a near-impregnable defence. So reluctant was he to get out that at times he refused to score.

According to David Frith, Walker once played 170 balls from David Harris for a solitary run. Walker also scored 95* and 102 for White Conduit Club against Kent in 1786, thus missing out on becoming the first player to score two hundreds in a First-Class match.

Despite his batting feats, history of cricket remembers Walker as the man who probably invented round-arm bowling. At some point of time between 1770 and 1790 he tried bowling with his bowling arm at an angle with his torso.

He realised that the angle and height allowed him to generate more bounce from the already atrocious pitches. From 197 recorded matches Walker claimed at least 337 wickets (along with 6,399 runs); one must remember that he was also an occasional wicketkeeper.

Things were not easy for Walker, for cricket has seldom been prompt in accepting changes. He was no-balled several times and had to revert to lobs.

John Nyren wrote in The Hambledon Men: About a couple of years after Walker had been with us [Hambledon], he began the system of throwing instead of bowling, now so much the fashion. At that time it was esteemed foul play, and so it was decided by a council of the Hambledon Club which was called for the purpose.

However fascinating Walker s career might have been, this story is not about him, though it involves his wonderful creation.

Round-arm bowling gained popularity in the early 19th century. Let me take a moment here to elaborate on the difference between round-arm and over-arm bowling.

In round-arm bowling you could not raise your arm above your shoulder. If you have problems visualising that, think of Lasith Malinga. The right arm of Slinga does rise above his shoulder, but only marginally so. You get the basic idea, I presume.

Over-arm bowling, of course, is what we get to see today.

The story begins with Christina Willes. Whether she was a competent cricketer is shrouded in mystery. What we do know is the fact that she was an enthusiastic cricketer, a chunk of her sporting pursuits involving playing with her brother John.

John Willes was no ordinary cricketer. He could extract pace even when he bowled under-arm. Not a lot of his cricket career is documented, but he was good enough to make it to the first two Gentlemen vs Players encounters.

Playing alongside him were several champions of the era like Lord Frederick Beauclerk, Silver Billy Beldham, and Nyren, while the opposition included John Small and our old friend Tom Walker.

Willes took at least 3 wickets from the 2 matches (one must remember that the bowler s name was recorded only if the dismissal was bowled or LBW). He bowled both Beldham and Small in the second of these matches.

Let us get back to Christina. Skirts with massive girth, supported by hoop skirts, were the fashion of the late Georgian era. Christina was no exception to contemporary attire. Obviously, hoop skirts made under-arm bowling rather difficult.

So Christina came up with a solution. Let us quote AG Steel (some may find the excerpt sexist): Now everyone who has seen ladies attempting to throw a stone or cricket ball will remember that they invariably have a half-round, half-under sort of delivery, and this Miss Willes, in common with the majority of ladies, seems to have possessed. Her brother, accustomed to play against what in those days was the only known style of bowling, viz. under-arm, was somewhat perplexed and worried with this unknown feminine species of ball, which doubtless he found difficult to tackle. How amusing it would have been to have watched this keen cricketer, probably not unconscious of his own merits as a batsman, entirely puzzled by the deliveries of a lady!

Note: Though several contemporary writers agree with the story, John Major mentions in More Than a Game that hoop skirts went out of fashion during the era.

As was expected, John became a practitioner of round-arm bowling. He soon understood its benefits.

While Willes was revolutionising bowling, not everyone in England welcomed the idea. Nyren wrote: The first I recollect seeing revive the custom [of round-arm bowling] was Wills [sic], a Sussex man. I am decidedly of opinion, that if it be not stopped altogether, the character of the game will become changed. I should hope that such powerful and efficient members of the Mary-le-bone Club as Mr. Ward, &c., will determine, not only to discountenance, but wholly and finally to suppress it ; and instead, to foster and give every encouragement to genuine, bona fide bowlers men with a fine delivery.

Note: Interestingly, later in the book Nyren refers to Willes as a Kent man .

However, Nyren, Beldham, and John Pycroft were all in agreement that Walker was the inventor of round-arm bowling, while Willes was his first prominent successor.

He was no-balled on several occasions, but Willes was not one to back down. An All-England XIII took on a Kent XXIII at Penenden Heath in July 1807 with 1,000 at stake. Pycroft wrote in The Cricket Field: The straight-arm bowling, introduced by John Willes, Esq., was generally practised in the game, and proved an obstacle against getting runs, in comparison to what might have been got by the straightforward bowling. This bowling met with great opposition. Mr. Willes and his bowling were frequently barred in making a match; and he played sometimes amidst much uproar and confusion. Still he would persevere till the ring closed in on the players, the stumps were lawlessly pulled up, and all came to a standstill.

The rising popularity of round-arm bowling was not good news for cricket (at least according to the men who mattered). They added a new law in 1816: The ball must be bowled (not thrown or jerked), and be delivered underhand, with the hand below the elbow. But if the ball be jerked, or the arm extended from the body horizontally, and any part of the hand be uppermost, or the hand horizontally extended when the ball is delivered, the Umpires shall call, No Ball .

That ruled out round-arm bowling. However, it was not easy to subdue Willes.

That day at Lord s

A formidable Kent side took on MCC at Lord s that July day. MCC won the toss (though there is little supporting document, Beauclerk was possibly leading them) and opted to bat. Richard Lane and Francis Nicholas walked out to bat.

It is not clear when Willes was summoned to bowl. When his turn came, he bowled round-arm, and was no-balled promptly.

But there was a problem. Not only was Willes a fast bowler, he also possessed the temperament of one. He was not going to have an umpire calling him for what he thought was right in front of a packed crowd.

Willes had had enough. He marched out of the ground in high dudgeon . More drama unfolded as he mounted his horse parked outside Lord s and left the ground for good, vowing never to return to cricket.

One can only wonder what went through the spectators minds.

Kent were allowed to rope in Thomas Battersbee, a full substitute for Willes, but he was hardly needed. After bowling out MCC for 207, Kent secured a 52-run lead thanks to James Jordan s 86. Batting at No. 11 Battersbee scored 13.

It turned out to be a no-contest as MCC folded the next morning for 48.

Willes had ignited a spark. Perhaps his dramatic exit had to do with it, but one Mr Knight (as per Pycroft) of Alton became the next known practitioner in approximately 1825. Curiously, just like Willes, Knight picked up the art while practising with two ladies .

Pycroft s Mr Knight of Alton was George Thomas Knight, the second of four brothers to play First-Class cricket (the others, in chronological order, were Edward, Henry, and Brook).

Trivia (probably irrelevant): George was a favourite nephew of one of his aunts. This aunt, one of the finest exponents of English literature, went by the name of Jane Austen. In fact, George was named George Thomas Austen at birth.

George took Willes case, taking steps to promote round-arm bowling. George was not the greatest of cricketers, but he had three excellent aspects that made him a significant part of cricket history: he was a round-arm bowler himself; he held an influential position (a prominent post in MCC); and he never gave up on his cause.

Willes organised three trial matches between MCC and Sussex in 1827 under the conditions that round-arm bowling will be considered legal in these matches. Sussex included Frederick Lillywhite and Jem Broadbridge, the finest exponents of round-arm bowling of the era, in the Sussex side.

Sussex won the first two matches. Nine MCC cricketers signed a declaration after the match: We, the undersigned, do agree that we will not play the third match between All England and Sussex, which is intended to be played at Brighton in July or August unless the Sussex bowlers bowl fair this is, abstain from throwing. Signed by T. Marsden, W. Ashby, W. Mathews, W. Searle, J. Saunders, T. C. Howard, W. Caldecourt, F. Pilch and T. Beagley.

Thankfully, the letter was withdrawn, probably because Knight declared that the England bowlers would now have a go at round-arm bowling as well.

When Lillywhite and Broadbridge blew them away for 27, everyone predicted another England defeat, but the round-arm bowling of Knight helped restrict Sussex to a 50-run lead. England scored 169 in the second innings before Knight s round-arm skills proved instrumental in securing a thrilling 24-run victory.

The effectiveness of round-arm bowling was established. On May 19, 1828 the law was amended despite some resistance: The ball shall be bowled; if it be thrown or jerked, or if any part of the hand or arm be above the shoulder at the time of delivery, the umpire shall call No Ball .

In 1864, over-arm bowling was finally legalised. Most cricket historians consider the year as the beginning of the modern cricket era .

What happened to Willes?

Willes never played competitive cricket again, but he mentored Alfred Mynn, The Lion of Kent . He was also an amateur boxer, was widely acknowledged as the best shot in Kent, and was generally proficient in all sports.

Willes passed away in 1852, seventeen years after round-arm bowling was legalised. 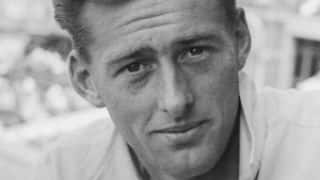