Jonathan Trott gets three lives off the same delivery!

Jonathan Trott gets three lives off the same delivery!

Play this video ten times and one will not stop laughing. Brett Lee is a delight to fans. Not only the rhythmic run-up, and thunderbolts that he releases, over the years, the Australian has entertained with some memorable moves.

Play this video ten times and one will not stop laughing. Brett Lee is a delight to fans. Not only the rhythmic run-up, and thunderbolts that he releases, over the years, the Australian has entertained with some memorable moves. In the fourth One Day International (ODI) of England’s tour Of Australia 2011, a comedy of errors ensued!

The match was played at the Adelaide Oval on Australia Day. Lee bowled a real quick delivery to England’s Jonathan Trott, which hurried on to him. He managed to get some bat on it but the ball was drifting towards. It touched the wood but didn’t have enough pace on it to knock the bails off. Trott got the first life. Meanwhile, Trott’s partner Matt Prior called for a run and reached the strikers end in no time. Trott, who was trying to save his wicket had no idea about this, Lee charged in to effect a run out and made a mess if it.

By now, Trott baffled by the fact that his partner had taken the run, looked to complete it himself and on turning bumped into Lee, who picked up the ball and in a rush of blood took a throw at the stumps, missed the target at the non-strikers end and made it difficult for Australian skipper Michael Clarke to collect it as the throw was way out of target. It is rightly said that the moment you hesitate, while running, you are in trouble. But, the lady luck was on Trott’s side, as he made his ground and was inside the crease safely. Life number two was the missed run out opportunity.

While all was good between Lee and Trott, and they exchanged high-fives, Clarke felt there was a case of obstruction of field, as the batsman pushed and shoved the bowler. But the umpire rightly said that it wasn’t deliberate but accidental. Trott got his third life as the umpire didn’t really think on the lines of Clarke.

It was a good day for Trott indeed. He went on to score 102 and England won the game by 21 runs. 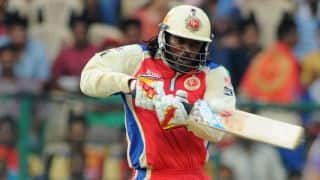 How to lose friends, the Vinod Kambli way