Jonty Rhodes, born July 27, 1969, is a one-in-a-million sportsman — an outright phenomenon. His athleticism and dedication towards the game has inspired millions of cricketers, young and old, to try and emulate him, which is next to an impossible task. Jaideep Vaidya goes through the career one of the most popular and loved cricketers ever to have played the game. 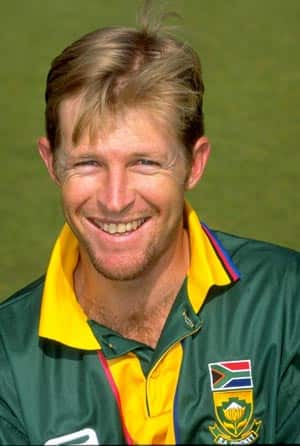 Jonty Rhodes, born July 27, 1969, is a one-in-a-million sportsman — an outright phenomenon. His athleticism and dedication towards the game has inspired millions of cricketers, young and old, to try and emulate him, which is next to an impossible task. Jaideep Vaidya goes through the career one of the most popular and loved cricketers ever to have played the game.

There are quite a few good cricketers, fewer great cricketers and a handful guys who are just pure freaks of nature. India’s Mahendra Singh Dhoni is one of them among the batsmen, and Sri Lanka’s Muttiah Muralitharan first comes to mind when you think of bowlers. However, if you consider the third and often unacknowledged facet of the game — fielding — only one name comes to mind.

In the nineties, when the writer began following cricket in India it was all about batting, as it has always been in India. Pictures of Sachin Tendulkar, Rahul Dravid and Sourav Ganguly adorned the walls of children and young cricketers, who aspired to emulate their idols and asked for cricket bats on their birthdays and festive holidays. India might not have had a world-beating team in the late eighties and nineties, and even the noughties, but their batting line-up was the pride and honour of millions. Bowlers were reduced to mere academic importance, considered tools to deliver the red and white spheres to the batsmen to whack. Meanwhile, even the concept of a fielding ceased to exist.

The writer’s generation grew up watching visibly unfit Indian cricketers embarrass themselves on the field, diving over the ball rather than at it and often giving up the chase as soon as leather hit the willow. Catches were dropped at a frequency higher than, for the lack of a better example on a groggy Saturday morning, the droppings of a bird on your shirt when you least want it. The indifferent attitude of the players had seeped into the fans, who had perhaps forgotten or hadn’t realised the possibility of an alternative. However, it was all to change on March 8, 1992, during a World Cup match between South Africa and Pakistan at Brisbane, when a green blur swooshed in from point with the ball and crashed into the stumps to run out Inzamam-ul-Haq. The legend of Jonty Rhodes was born on this day.

“Is it a bird? Is it a plane? No, it’s Jonty!” screamed out a newspaper the next morning. It was a breakthrough moment for the mop-headed, rather frail-looking and diminutive Rhodes, who was playing in his first tournament. As it turned out, it wasn’t a one-off show; Rhodes produced many such Superman antics on the field that soon earned him a reputation for purely his fielding. He dived, he leaped, he lunged, he defied gravity while patrolling the point-cover region throughout his career. He wasn’t the tallest of blokes on the ground, but his athleticism and his agility ensured that he seemed taller than Yao Ming and faster than Usain Bolt. For a man who looked so delicate on the field in his earlier years, it was amazing that he had all his bones intact after each fall.

The sub-continent got its first real taste of Rhodes when South Africa participated in the 1993-94 Hero Cup in India. Playing the West Indies at Mumbai’s Brabourne Stadium, Rhodes stunned the crowd with his acrobatics and even got a world record to his name, which stands to date. Rhodes took five catches patrolling the circle, after making a brisk 40 with the bat that helped his team win by 41 runs. With each catch and an astonishingly nimble display on the field, chants of “Jonty! Jonty!” grew louder in the stands as Indians witnessed something they had only heard, read or watched on television, but never seen with their own eyes. Richie Richardson, the West Indies skipper, summed it up fittingly in his post-match chat with the media: “We suffered from ‘Jontivitis’!” 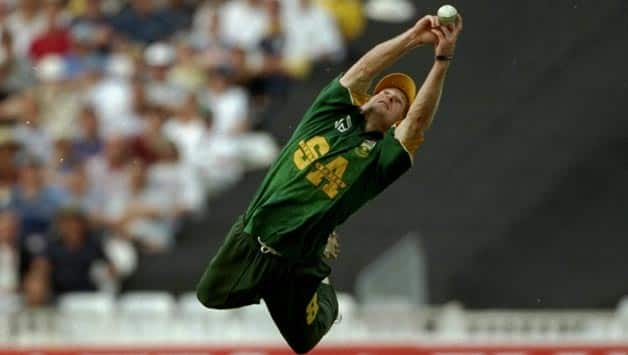 He was born Jonathan Neil Rhodes, an Afrikaner, and hailed from Pietermaritzberg, Natal. As a junior, he shone in cricket, football and hockey. In fact, he was so good in the latter sport that he was picked in the squad for the 1992 Barcelona Olympics and would have gone had the team not failed to qualify. Instead, he played the cricket World Cup that year and his life was to change forever. Rhodes made his Test debut that same year against India at Durban in the “Friendship Tour”. He scored 41 and 26 not out in his first outing, before a 91 in the second Test validated the selectors’ decision to pick him.

In just his fifth Test, Rhodes scored his first century during a tour of Sri Lanka in 1993. He was never a prolific run-scorer, but he would come in to bat in the middle and lower middle-order, usually at No 6, and play a handy knock to finish the innings for the South Africans. He may have scored just three Test centuries, but they were all innings of class. The first saved a match in Sri Lanka on a turning pitch; the second was achieved after coming in at a precarious 46 for four at Lord’s that eventually helped South Africa beat England by 10 wickets in 1998; and the third was against the West Indies in early 1999 where he scored an unbeaten 103 that took just 95 balls — a new South African record for the fastest century — including eight fours and six sixes.

Rhodes averaged just above 35 in Tests, but the figure swelled up during the last three years of his Test career after he tweaked his technique a bit. In 2000, he called time on his Test career to concentrate on the one-day game, where he flourished as a match-winning finisher. Rhodes was one of the first exponents of unorthodox shots like the reverse sweep and could be credited with bringing innovation into limited-overs batting. His swift and smart running between the wickets won his team several extra runs that often went on to decide the result of the game. And that wasn’t all.

Whatever limitations, if any, he had as a batsman, were made up for on the field. Rhodes was worth at least 30-35 runs to the fielding team and, as his reputation grew, batsmen became vary of hitting the ball in his direction, and they dared not steal a single if it went towards him. Bowlers in his team also loved having him around. Former teammate Clive Rice once told the BBC, “He made you look good when you were bowling. He could even cut off runs from bad balls.”

Unfortunately for cricket fans, Rhodes played in the pre-Twenty20 era. His athleticism would have made him a trump card for any captain in the format. In 2003, to the dismay of millions of cricket fans around the world, Rhodes announced his retirement from ODIs after injuring his hand during a Pool B match against Kenya in the World Cup.. Rhodes went out after playing a South African record 245 ODIs in which he scored 5,935 runs at 35.11 and a strike-rate of 80.91 — impressive numbers for a middle-order batsman. “Cricket has brought a lot of joy for me, but I’d also like to think, over the last 14 years of First-Class cricket and 10 years for my country, that I’ve given a bit back as well,” he said. “I don’t think I’ve got the patience to be an umpire or the temperament to be a coach, and I’m not a commentator. I may talk a lot on the field, but it’s mostly rubbish. Maybe I’ll take up surfing, it’s safer out there.”

Rhodes played for Gloucestershire for a season after recovering from his injury, before giving up his playing career for good. A commerce graduate, he went on to work for Standard Bank as an account executive. However, with his heart firmly attached to the game, he could not stay out of the emerald enclosure of the cricket field for long. Rhodes returned to the game as a fielding coach/consultant for a host of teams: Pakistan, Kenya, South Africa and the Mumbai Indians. In the 2013 Indian Premier League (IPL), Rhodes helped MI win the title for the first time. Wicketkeeper batsman Aditya Tare told this writer about Rhodes’s fielding drills recently in an interview: “Jonty is an energetic guy. He must be 40-42 [actually 44], but he’s so energetic that he can match any of the youngsters in our team. His fielding sessions are not long; they are short and full of intensity.” It’s no surprise that South Africa are regarded the best fielding outfit in the world. With Rhodes as an idol and a former player and coach, it is bound to happen. He’s a guy whose never-depleting energy levels would make that bunny who is the mascot for a cell battery company look like an amateur. “He was effervescent,” said Rice. “I couldn’t believe that he could keep up that level of energy throughout the day without dropping dead.”

Such is Rhodes’s impact and appeal in the cricket world that if any player goes even near emulating his antics on the field, he is said to have ‘done a Jonty’. Rhodes is bound to go down the annals of history as the best fielder to have ever graced the cricket field, and continues to be the number one inspiration for millions.