It was a crucial Shell Trophy encounter, Joseph Yovich gave his boot to Billy Bowden, and bowled an apple.

The incident took place at Basin Reserve, but it would have been more fitting if it had happened at Eden Park. Unfortunately, not everything turned out to be perfect. The Shell Trophy of 2000-01 had reached its final stages. Wellington (on 32 points before the match) and Northern Districts (on 26), the top two teams, were pitted against each other that day. The only way for Northern Districts to share the title was an outright win; anything less than that would mean a Shell Trophy (erstwhile Plunket Shield) win for Wellington.

Robbie Hart opted to bat, and James Marshall and Michael Parlane set about scoring runs, adding 46 in 77 balls. Unfortunately for them, quick wickets kept falling; it was only a 78-run stand for the sixth wicket. Northern Districts finished Day One on 247 for 8.

Day Two started with Hart and Graeme Aldridge adding 60 for the ninth wicket, but Northern Districts were eventually bowled out for 315. Given the flat track, they needed to bowl out Wellington quickly for an outright win.

Unfortunately for them, Matthew Bell and Richard Jones added 154 for the opening stand. A few quick wickets followed, and Northern Districts probably sniffed a chance at 261 for 4, but Grant Donaldson and Matthew Walker put up a 105-run stand. Wellington took lead just before lunch on Day Three, as good as clinching the Trophy.

Donaldson and Walker walked out to the centre after lunch, accompanied by the umpires and a forlorn group of Northern Districts cricketers. What followed left the sparse crowd at Basin Reserve shocked.

Wisden reported: “Yovich bowled the first ball after the break with a red apple, an event recorded on the official score-sheet.” In an interview with Northern Districts Cricket, Hart fondly remembered that Yovich “took off a boot and gave it to Billy Bowden to hold, and bowled an apple!”

One of Dickie Bird’s most popular stories involved John Snow bowling a bar of red soap (that exploded on being hit by Peter Marner). Whether the Snow incident was apocryphal has not been confirmed, but Yovich’s apple was certainly true.

What followed is not very well-documented, but it was evident that Northern Districts had resigned. Mark Jefferson and Jeetan Patel added further salt to their wounds with a ninth-wicket stand of 74. Wellington eventually led by 193. Grant Bradburn, having taken the first three wickets, finished with 5 for 114.

The tourists were reduced to 49 for 3 on the final morning before Bradburn joined Hamish Marshall. As the match petered out to a draw, Matthew Bell, Chris Nevin (Jefferson kept wickets), and Selwyn Blackmore all bowled for the first time in his career.

Not to be outdone, Jones came on for the first over of his career, and had Bradburn caught by Nevin first ball. Play was called off at the fall of the wicket. Northern Districts finished on 247 for 6 as Wellington won the Trophy. Jones never bowled again, and finished with a First-Class career record of 0.1-0-0-1. 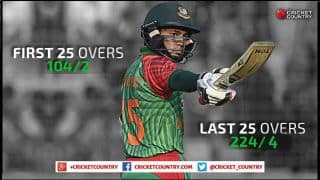 Bangladesh vs Pakistan, 1st ODI at Dhaka: Tamim Iqbal’s century; his record-breaking partnership with Mushfiqur rahim and other highlights