Julian Cahn, born October 21, 1882, deserves a much bigger article as the cricket-mad eccentric entrepreneur, and he will be honoured in these pages with one. In this short piece Arunabha Sengupta recalls a couple of idiosyncrasies of the man.

Sir Julian Cahn, eccentric furniture magnate, philanthropist and cricket enthusiast. A maverick in every sphere. A character like no other.

Early in his apprenticeship, while working in his father s business, he formed the Nottingham Furniture Company XI. From there he worked on his managerial skills to end up leading, financing and maintaining his own Sir Julian Cahn s XI. It thrived during the Great Depression, touring the world, and had a track record of losing just 19 of the 621 matches it contested.

With players of the stature of Stewie Dempster and Andy Sandham in his side, the success was guaranteed. Dempster was employed in his firm just to allow him to exercise his talents for the cricket team. Cahn signed up Test cricketers from the southern hemisphere (he entertained all touring sides except the Australians). His team travelled to such exotic lands like Canada, Argentina, Jamaica, Ceylon and New Zealand.

In England, Cahn owned grounds at West Bridgford in Nottingham and Stanford Hall near Loughborough.

During the Great Depression and the Second World War, Cahn went beyond his own side. He paid for the upkeep of several cricket clubs that were short of funds in those morose times.

Cahn himself was not a talented cricketer, not remotely so. His 6 First-Class matches got him 70 runs at 10 with a highest of 17, and 2 wickets at 74.50. Being a hypochondriac who often preferred electric wheelchairs to walking and was surrounded by nurses, his physical and mental make-up were not really tailored for success in the game.

However, Cahn did contribute to his side s triumphs in other ways.

He often invited opposing sides to his home, Stanford Hall, to play his XI at the adjoining cricket ground. The Cricketers Wing of his mansion accommodated the visitors. And sometimes, Cahn would practice on his Wurlitzer Organ in the 350-seater theatre below the accommodation at ungodly hours. And hence the opponents would get less than their quota of sleep and would turn out in the ground bleary-eyed.

Among other things, Cahn batted in inflatable pads, which were so humongous that they ruled out the chance of him getting bowled. There was no question of him being given leg-before. The pads were very large, and the ball bounced readily off them for leg-byes, which the umpires conveniently forgot to signal, wrote EW Swanton.

While going out to bat, Cahn would turn thrice before passing through the doorway. Before that he would put on his right inflatable pad first. When a spate of wickets fell in a short span of time, sometimes the two above actions took place simultaneously, with Cahn turning circles while trying to put on his pad and walk through the doorway. To at least one onlooker it did seem like the performance of an ostrich doing a courtship dance. 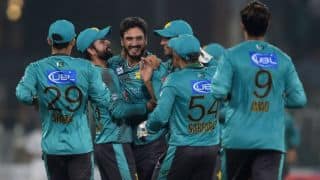