John Glennie “Jungly” Greig is considered by many as India’s first great batsman.

John Glennie “Jungly” Greig, born October 24, 1871, is considered by many as India’s first great batsman. Abhishek Mukherjee looks at the career of an Englishman who dominated Indian cricket at the turn of the century and helped unearth the “first great Indian cricketer”.

There have been Englishmen who have had problems with Indian names. KS Ranjitsinhji was referred to as Smith, as was KS Duleepsinhji; Maharajkumar of Vizianagram became Vizzy; Srinivas Venkataraghavan became Rent-a-Wagon; and Tony Greig could never get himself to pronounce “Jadeja”.

The case was reversed in the case of John Glennie Greig. The local Indians, who admired his batting talents immensely (one must not forget he was also a good “slow” bowler), could not get themselves to say “John Glennie”. He became “Jungly” (which translates to “wild” in most North Indian languages) instead, and it was by that name that he created a niche for himself.

Greig was small, very small — to the extent that DB Deodhar called him a “white pygmy”. In India’s Hambledon Men, Vasant Raiji wrote of him: “Though slight of physique he possessed strong wrists and uncommonly keen vision, which enabled him to employ a variety of attractive strokes all round the wicket.”

Despite his versatility, the shot that made Greig stand out was the late-cut, then a novelty in India. Deodhar also called his bowling “brainy and artful”, and added that his fielding was “as good as his batting,” adding that he “allowed nothing to get past him and held some of the most difficult and hard catches.”

For a man who played his cricket a century ago, Greig’s numbers make excellent reading. A career spanning 125 matches got him 7,348 runs at 36.37 and 138 wickets at 23.46. These are exceptional numbers, given that he played a significant part of his cricket in India, where cricket was still in its nascent stages.

Greig’s talent, however, was not limited to cricket: he won the Open Singles Racquets Cup ten times and was one of the regular winners of tennis (singles) tournaments. He was awarded two silver cups for his services to Bombay Presidency.

Greig was born in Mhow (renamed Dr Ambedkar Nagar in 2003) less than a year before Ranji at Sarodar. Greig was certainly not the last great cricketer to be associated with Mhow: Denis Compton was posted there during World War II. It was during this period that he pulled off his remarkable achievements for Holkar.

But this is not Compton’s story. Greig went to England, and joined the Army. He amassed 123 for Royal Military College Sandhurst against Royal Military Academy Woolwich. He came to India for the Army, and made his First-Class debut in the second Bombay Presidency match, scoring 28 and 23. It was the first time that Europeans won the contest.

He continued to play the annual Bombay Presidency match, in which a few big names in Indian (and even international) cricket appeared. One of the regular participants of the fixture was Malcolm Jardine, whose son would take the world of cricket by storm a few decades later.

In 1895-96 Greig scored 94, adding 160 with Robert Poore (100 not out). Raiji wrote: “Although Major RM Poore made an unbeaten century in the same innings, according to the reports Greig’s was the better knock.” Poore played three Tests for South Africa later that season.

The following season saw Europeans take on Parsees twice, and Greig dominated the contests. At Bombay he scored 98 out of 173 (to put things into perspective, Parsees were bowled out for 62 and 121). At Poona, Greig scored 96 out of 174 in the first innings. His contribution did not end there: set to chase 180, Europeans were reduced to 41 for 3, but Greig shepherded the innings with 62 not out. Europeans won by two wickets.

These two matches established Greig’s supremacy as the finest batsman in the country, but that was not enough for him. In 1898-99 Greig skittled out Parsees for 37 and 92; he claimed 6 for 22 and 7 for 36. A humongous 184 (his highest in the tournament) followed the following season.

This innings deserves special mention. JM Framjee Patel wrote of the innings in Stray Thoughts on Indian Cricket: “I have seen him play many brilliant innings on all kinds of wickets, but the one against the Parsees, when he compiled 184 against picked bowling will not easily be surpassed. In India he will always be remembered by that grand display.

Framjee Patel added: “He commenced playing [Ardeshir] Mehta very cautiously for the first quarter of an hour, when the Parsee trundle is always at his best. When he collared Mehta and [Maneksha] Bulsara (the fast bowler) his cricket became quite sensational and worth watching. He drove, glanced and cut the difficult bowling all over the field with consummate ease. After he passed the hundred the scoring was faster. It was a treat to see him hitting boundaries and taking the opportunity thus afforded of sitting down to rest.”

When he eventually fell for 184, “”friend and foe regretted that their idol had not made his 200.” He received a huge ovation, and was presented with a bat by HD Kanga. What was more, Greig was not the least tired — for he danced all night at Government House.

Greig made his Hampshire debut in 1901 while on a vacation, and clobbered a strong Lancashire attack that season at Liverpool on his way to a career-best 249 not out after scoring 47 out of 106 in the first innings. The season saw him score 1,277 runs at 41.19 with five hundreds and take 27 wickets at 25.62 from 20 matches. He was named Captain of the Army the same season.

When Oxford University Authentics toured India in 1902-03, Greig played against them for Bombay.  The tourists claimed a 209-run lead, but Greig pulled off a spectacular 204; the attack consisted of George Simpson-Hayward, the last great underarm bowler (he played five Tests as well). Just before the match he had scored 39 and 30 against Parsees, thus becoming the first batsman to score 1,000 runs in the Presidency Match.

By the time the all-Indian side toured England, Greig was 40 (though he was, by no means, past his prime). He was, however, the Chief Selectors: the committee consisted of Framjee Patel and ME Pavri (both Parsees), Sir Chunilal V Mehta and VJ Naik (both Hindus), and Hon. Sir Ibrahim Rahimtulla and Ameeruddin Tyabji (both Muslims).

However, Greig had a bigger role to play on the tour. When he practised at Poona Club, Greig often faced a member of the ground-staff who bowled left-arm spin; he was so impressed that he went on batting against the man for hours. Greig insisted this man be included for the Hindu sides that took on Poona.

Unfortunately, Palwankar Baloo, the man in question (Ramachandra Guha called him “the first great Indian cricketer” in A Corner of a Foreign Field), was a lower-caste untouchable, and the selection was condemned by the upper-caste Poona Brahmins. Greig “publicly questioned the judgement of those who wished to exclude Baloo on account of his caste”).

Greig’s cricket career was far from over. He scored 142 and 66 against Parsees the following year. He also led a side against Hindus (that included both Baloo and his brother Palwankar Shivram), and scored 22 and 54 not out. Baloo dismissed him in the first innings.

On Lady Willingdon’s suggestion, Bombay Gymkhana hosted a “cricket week” from December 13 to 18, 1915 for Bombay Presidency War and Relief Fund. This started off a 12-a-side match between “India” and “England”.

Led by Maharaja of Patiala, the hosts included stalwarts like Palwankar Vithal (yes, another brother), DB Deodhar, and Kekhasharu Mistry. The tourists, on the other hand, included Greig, Frank Tarrant, Walter Livsey, and was led by Freeman Thomas (Lord Willingdon).

Note: To be fair to the selectors, Willingdon was not exactly your village cricketer. He played for Cambridge University and Sussex; his father Freeman Frederick Thomas had also played for Sussex, while Willingdon’s son Gerard Frederick Freeman-Thomas played for Eton.

The Bombay Presidency match had become Bombay Triangular in 1907-08 following the inception of Hindus and Bombay Quadrangular in 1912-13 after the Muslims joined. Greig saw it all happen. He played his last Quadrangular match in 1920-21, top-scoring with 92 against Parsees.

He played for Hampshire for two more seasons without any success before hanging up his boots. He was 50 at this stage, and a Colonel in the Army. He became Secretary of Hampshire in his penultimate season — a position he held for nine years.

Greig became a Roman Catholic in his later days, and was ordained a Priest in 1937. He served Hampshire Cricket Club as President in 1945 and 1946 before he was made Honorary Canon of Diocese of Portsmouth. He was awarded CIE by George VI.

Greig passed away on May 24, 1958 at Milford-on-Sea, Hampshire. He was 86. The final word on Greig should be Raiji’s: “He belonged as much to Bombay and Indian cricket as Ranji to Sussex and English cricket.”

He was buried Canon (Colonel) John Glennie Greig, but Indian cricket will remember him as Jungly. 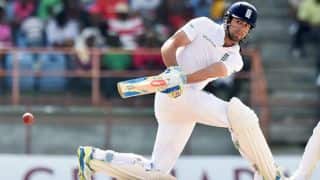