Tucked away in the town of Epsom, Surrey, hidden unobtrusively in the middle of residential buildings and nondescript stores, the JW McKenzie Cricket Books is a treasure-trove for cricket lovers. 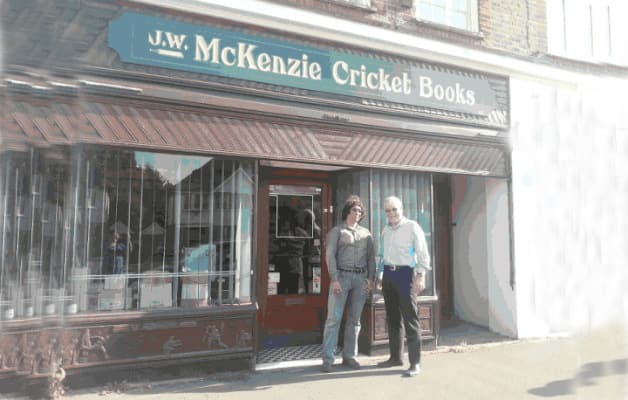 John McKenzie (right) with the interviewer in front of the JW McKenzie Cricket Books, Epsom, Surrey

Tucked away near the town of Epsom, Surrey, hidden unobtrusively in the middle of residential buildings and nondescript stores, the J W McKenzie Cricket Bookshop is a treasure-trove for cricket lovers.

On the shelves one comes across books stretching across time and space, from John Nyren’s accounts of Hambledon to Gideon Haigh’s superb new biography of Shane Warne. While all the Neville Cardus volumes stand in timeless appeal in their designated alphabetical positions, John Arlott beckons from the other end. Stacked across two rooms are accounts of cricketers and the chroniclers from the beginning of the game’s documented history to the current day. And in between the Ray Robinsons and the R C Robertson-Glasgows, one comes across rare cricketing pieces by J M Barrie, P G Wodehouse, A A Milne and others.

The selection of memorabilia includes cricket autographs, prints, scorecards and china.  Among the many gems are letters from Ken Barrington with the letterhead of his garage in Surrey, and various porcelain plates with autographs of touring sides, as well as letters from cricketers such as W G Grace, A E Stoddart, Jack Hobbs, and autograph sheets of teams from the 1909 Australian team onwards.

The bookshop is the only one of its kind, specialising solely in cricket books and memorabilia. Set up by John McKenzie in 1973, it has been running for 40 years from the same unpretentious outlet. Arunabha Sengupta, Cricketcountry’s chief cricket writer, met John McKenzie in his shop during the hiatus between the Chester le Street and the Oval Tests. There followed a delightful travel across the history of this unique store, peppered with anecdotes about auctions around the world, meetings with Don Bradman and much more.

CricketCountry (CC): This is an unusual place for a cricket shop, almost in the middle of nowhere.

John McKenzie (JM): The shop is very accessible and is only half an hour from London by train.  It would not be viable to be in a town centre due to all the overheads that would involve.

CC: How did your interest start?

JM: I came to England from Cape Town in the 1950s, and soon became interested in cricket.  My father was a journalist and introduced me to South African cricketers such as Russell Endean, Louis Duffus and Eddie Barlow, who came to visit him.

My grandfather was an art collector and opened an art gallery in Kimberley.  The collecting instinct must have been inherited.

CC: And how did your business expand?

JM: I started the business by working from home but this became too full and I had to find more space. I found this shop in 1973 while taking the dog for a walk. It was perfect and close to where my house was.  It had been a lending library so it came with shelves, which was very useful. Over the years the stock has increased enormously.  Eventually I had to expand the shop to accommodate this stock.  I am now well-known and am frequently visited by customers, including many from overseas.

Since 1972 I have regularly issued catalogues of cricket books, Wisdens and memorabilia, and have recently issued catalogue number 177.  I am very fortunate to have help from Sue and Jean, who run the shop when I am away, and also from Arthur who does an excellent job packing the parcels which are sent all over the world.

CC: Do you travel around in other countries looking for books and memorabilia?

JM: Over the years I have bought cricket collections in Australia, South Africa, New Zealand and West Indies.

I went to India last December and spoke to [statistician] Mr Anandji Dossa, and I met [historian] Mr Vasant Raiji who took me to the Cricket Club of India for a fascinating lunch; he had some wonderful reminiscences.

I met Don Bradman, Bill Ponsford and Bill O’Reilly on my first trip to Australia in 1987, and Ponsford’s grand-daughter Megan visited the shop recently.

CC: How do you get your books and other items?

JM: I go to auctions and bookshops and I am regularly offered collections.

CC: Do you read all the books that can be found here?

JM: There are far too many books here for me to read, but I do read as many as possible.

CC: Do you get enough buyers for your memorabilia collection as well?

JM: I can never have enough customers and I would always like more!  Although most of my customers are in the UK I also have customers throughout the world, including Australia, South Africa, India, West Indies, USA and Canada.

CC: You must be finding that reading is not very popular nowadays.

JM: There are so many alternatives now. Recordings of old matches are always available on television [and the internet] so unfortunately people are less inclined to read about the game these days.

CC: What about the effect of Kindle and other electronic readers?

JM: Kindle has had less effect on me as a specialist bookshop but general bookshops are suffering these days.

CC: How do you rate the standard of modern cricket writing?

JM: There are some outstanding writers, as there always have been. Gideon Haigh is well thought of, as are Stephen Chalke and Duncan Hamilton, and there are many other quality cricket authors. 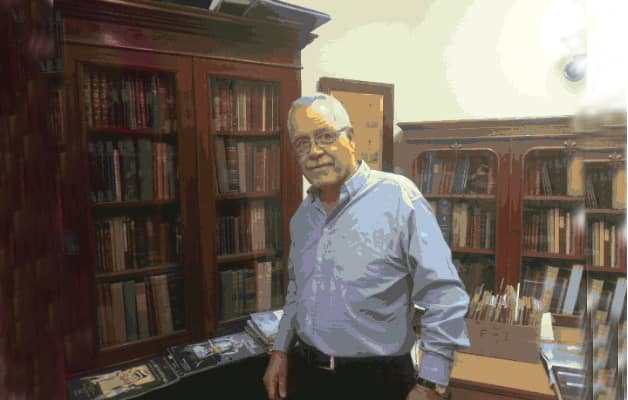 John McKenzie… in front of some of his rare book collection.

CC: Could you tell us about some interesting experiences you have had while collecting?

JM: I bought one of my first collections from an ex-pat in France in 1972. I have also bought cricket collections all over the world. During the 1990s I went to Australia for an auction of Victor Trumper’s books and memorabilia.  Having bought some unique items I was then told that the Australian Heritage Department would not allow the items out of the country, and I had to return to England without them. It was very disappointing and a waste of time and effort.

CC: What about some famous customers?

CC: What about your interactions with Bradman?

JM: I met Bradman’s wife Jessie in England when I produced the Bradman Century of Centuries plate in the late 1970s and she came to the launch at the factory. I had a lift back to London together with Lady Bradman.  We had a long conversation during the journey and she told me her recollections of Bradman’s career and how Bodyline had affected her.

In the mid-1980s a rare J M Barrie cricket book appeared at auction.  Don Bradman contacted me as he had a copy of this book, but unfortunately his copy  was the reprint. He invited me to visit on my next trip to Australia, which I did, and saw him on each of my trips to Australia.

CC: Are there a lot of cricket auctions held nowadays?

JM: There are not as many cricket auctions as there used to be.  These tend to be outside London as the London auctioneers only want to deal in expensive items, and are not very keen on cricket books and memorabilia.

CC: What is the future of the cricket books?

JM: There will always be a market for rare cricket books, or those that appeal to collectors. There is less interest in some second-hand and modern books these days.

CC: Is there any other cricket book shop in the world?

JM: There are some individuals who work from home, but there is no other shop specialising solely in cricket books and memorabilia.