All this to glorify Karun Nair: the only Indian (and third overall) to convert a maiden hundred into a triple-one.

If you outshine Virat Kohli and Ravichandran Ashwin in a Test, you got to have special talent. That means, you either have to score 235-plus runs when other batters fail to find their feet or, take five-fors as well as score a fifty. These are extraordinary feats achieved by extraordinary cricketers. Not many could attain but Kohli and Ashwin. Every hashtag, every news feed, every trend revolve around them, especially when India play at home. They bore as much as they baffle us. That is Kohli. That is Ashwin. That is that.

What about others then? They come. Some take five-fors. Some score hundreds. They fade away. Very few come close to their aura, even for a day. They perform. But they don’t turn the game on its head. They are not Kohli. They are not Ashwin. They are mere mortals. Come to think of it, we might as well call it a Kohli-Ashwin era.

All this to glorify Karun Nair: the only Indian (and third overall) to convert a maiden hundred into a triple-one.

When people were busy searching for #MondayBlue on a lazy Monday afternoon to lighten up the mood, few came across #KarunNair.

Journalists live-tweeted Nair s genius from the ground. Statisticians tweeted record-breaking numbers. Cricketers tweeted words of praise. And fans tweeted just to stay in the trend. Very few knew about Nair s existence. Sad that a few know Nair only because of the IPL.

Nair was born in Rajasthan. Nair originates from Kerala. He plays for Karnataka in Ranji Trophy. And he reached a new high at Chennai in only his third Test assignment.

IND vs ENG 5th Test Day 4: Nair s 303 not out, India s run-fest and other highlights

Usually, promising players make Ranji debut before they hit 20s, for it is a cornerstone. Nair was a bit late though. But Nair had played for Karnataka U-15 and U-19, India U-19, and Mangalore United.

Many take time to rise through the ranks. Nair is different. Nair thrives when given an opportunity. Nair takes very little time to translate his talent into performance: in this case only three innings to reach triple-hundred. Same was the case in his Ranji debut.

Nair smashed hundreds in quarter-finals and semi-finals of Ranji Trophy 2013-14. Nair smashed a winning six to gift Karnataka the coveted title after a 15-year wait. All this at the age of 21 when promising players had already established themselves.

To make matters more demanding, Nair was on 103 against England when half the side was back in the pavilion. Nair added exactly 200 more to his tally when India declared at 759 for 7. There, Nair sees slightest of opportunities in toughest of challenges.

Nair had Murali Vijay, Ashwin and lastly Ravindra Jadeja at the other end to pile up runs. Nair had the stage already set. But Nair made sure he doesn’t give away what was on offer. Yes, catches were dropped and a stumping chance was missed. But Nair was undeterred, that calmness never leaving him.

After Nair reached the double-hundred, he wasted no time. India were running against time. India had only one day to make England bat, skittle them out, and clinch series 4-0. However, India needed more runs. Nair gave them more runs and at a faster rate. There, Nair translated an opportunity into a personal stone.

Nair has the technique. He has patience to handle pressure. And he always had the talent. But now, Nair proved that he has enough application to translate his talent into a triple-century.

Nair is no Kohli. Nair is no Ashwin. Nair is a mere mortal. Come to think of it, Nair s 303 is here to stay forever amidst the Kohli-Ashwin era.

And now, every hashtag, every news feed, every trend revolve around the triple-centurion. That is Karun Nair. That is that.

(Kaustubh S. Mayekar, a reporter at CricketCountry, played cricket at U-16 level. Like his idol Rahul Dravid, he often shadow-practises cricket shots. His Twitter handle is @santa_kaus) 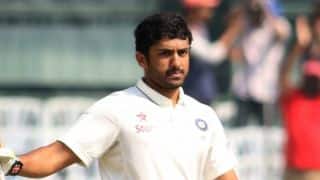