Kenny Burn: A Test cricketer due to a glaring mistake

Kenny Burn: A Test cricketer due to a glaring mistake

Kerry Burn was the man who played Test cricket due to a curious oversight. Even the mild-toned Wisden summarised his selection as ‘the one serious mistake in making up the side’.

Kenny Burn, born September 17, 1862, became a Test cricketer due to a hilarious mistake. Arunabha Sengupta recounts the life and times of the man who nevertheless went on to become the oldest living Test cricketer.

He was the man who played Test cricket due to a curious oversight. Even the mild-toned Wisden summarised his selection as ‘the one serious mistake in making up the side’.

Those were the days preceding the 1890 tour of England. Jack Blackham, the prince among wicketkeepers, was the ever-present man with the big gloves behind the stumps. He had been there ever since the inception of Test cricket. But, for a long tour, it was important to pick a stand-in keeper of merit.

The New South Wales cricketers of the side, led by Charlie Turner, plumped for their 24-year-old stumper Syd Deane. That very season, Deane had made an impressive debut. However, there was another contender as well. The Victorians were in favour of the 32-year-old Jack Harry, who had stood in for Blackham in 1884 and on occasion sent down useful off-breaks.

When the New South Wales players sailed on SS Ligura from Sydney to Melbourne, Deane was among them, expecting to be on board the ship to England.

However, on reaching Melbourne he was curtly informed that his services were not required. Harry was the man of choice. True, Blackham himself should have been consulted, but it was assumed that the veteran keeper knew that in Melbourne there were many men better than Deane not only in wicket-keeping but in all the departments of the game.

The players of New South Wales were not happy. It was an embarrassing deadlock. And Blackham was the one who suggested a compromise. He approached Harry Boyle, the former Australian bowler who was the manager for the tour. The legendary gloveman’s suggestion was to pick Burn from Tasmania. He had read that he was a good wicketkeeper and had stumped men back in Tasmania

The 27-year-old Kenny Burn was a familiar name for the Australians. In 1888, he had trialled with the Australians. He had played for the Australian XI in two matches against the two England teams led by Arthur Shrewsbury and GF Vernon. He had not got runs, but Tom Horan had pressed hard for his selection. Towards the end of that season he had hit 99 against GF Vernon’s XI

Now as Burns, a maintenance engineer with the Hobart Tramways, travelled across the Bass Straight to join the team, Horan was delighted. He wrote, “At last the team has been finally chosen, and Boyle no longer dreams of telegrams, no longer sinks back in his chair with a nervous clutch at his forehead to feel for the extra furrows begotten of the recent weary time he had had. I am glad for Boyle’s sake that it is all over, for his appetite was gradually failing, while his wonted gaiety had almost completely left him. That last notion of sending for Kenny Burn I like very well … Indeed, the very man (Blackham) who has now got Burn into the team was one of the very men who rejected him in 1888 … He is a capital batsman and a fine field.”

Yes, Burn was more than a decent batsman, although till then he had a highest score of 26 in First-Class cricket. After all Tasmania did not play too many games at the highest level. He got runs regularly Richmond CC and Wellington CC. In 1883-84, he had been a part of the first touring team to visit New Zealand, with the Tasmania side.

However, the problem was that he had been picked as Blackham’s understudy.

On joining the team, perhaps he was not informed of this stipulation. Or maybe he decided to keep his secret till the men had sailed. It was only in Adelaide, walking around the town with his teammates, he finally disclosed the fact. Burns, who stuttered heavily, blurted out: “I’ve n-n-never kept wickets in m-my l-life.”

This was ample reason for a lot of chaos, confusion, not to mention jest. Blackham apparently had mistaken Kenny Burn for his brother James Burn, who was indeed a wicketkeeper. However, even that choice seemed ill-advised, because James was over 40 and had never played First-Class cricket.

Yet, with the journey already commenced, it was decided to persist with the wrong Burn. After all, Kenny was a good batsman, a fine field and could also be counted upon to send down a few good overs. Both Blackham and Boyle wanted to avoid more controversy and complication.

As a result, Blackham had to shoulder some extraordinarily strenuous wicket-keeping duties through a long, demanding tour. But he had broad enough shoulders to withstand that pressure of responsibility.

Deane, his wicket-keeping dreams thus dashed, went on to become a stage and film actor, and appeared in more than 40 Hollywood films. One of the major movies he starred in was the first adaptation of Treasure Island on silver screen.

As the Liguria set sail, misfortune continued to dog the Australians. Opening batsman John Lyons fell off a trapeze and injured his hip. And then the vessel collided with French and British ships while coming to anchor in Gibraltar.

Burn started with ducks against Oxford University and Yorkshire, before managing 35 against Lancashire. A pair followed against MCC and then another blob against South. He had totalled 85 in 11 innings at 8.50 before the first Test match at Lord’s.

But now Sammy Jones reported with a severe chill. Sammy Woods was summoned from Cambridge, but declined the invitation. Frank Walters was woefully out of form. And Burns, chosen by mistake, was now into the Test side through a series of circumstances — favourable or disastrous depending on the point of view.

Burn batted at No 10 in the first innings and, in some sort of a cruel joke of fate on an wicketkeeping- impostor, was stumped for a duck. He was demoted to No 11 in the second innings. But walking out at 142 for 9, he batted with a lot of pluck to add 34 with Jack Barrett. As Barrett carried his bat to remain not out with 67, Burn scored a gutsy 19. This time he was caught by the rival keeper.

England won by 7 wickets. And Burn’s first Test had another curious feat of wicket-keeping.  Neither Blackham, nor the magnificently named English stumper Gregor McGregor, conceded a single bye in the match

But it was not all disappointment and despondence. Even as the Australian team bickered with others and within themselves, there were moments of fun. Burns, passionate about music, accompanied Hugh Trumble to the Albert Hall for a concert. After the performance, the great off-spinner asked Burns his opinion of the coronet player. Burns answered, “Not b-bad. But we’ve got a b-b-bloke in Hobart t-t-town who could b-b-blow his b-b-blooming head off!”

Back home in Tasmania, Burns resumed the role of one of the leading batsmen in local cricket, and remained so for the next decade and more.

He got runs regularly in the North vs South matches, and playing for Wellington against Break o’Day in early 1896, he hit 117 and 162 in the same match, both unbeaten.

In the next season, he batted with great aplomb against Ernie Jones, Tom McKibbin, George Giffen and Hugh Trumble to score 87 for Tasmania against a full strength Australian XI. Sadly, these matches were not deemed First-Class.

The true testimony of his class came in 1908. At the age of 45, he led Tasmania against the visiting MCC. Against the bowling of Wilfred Rhodes, Colin Blythe, Arthur Fielder and Len Braund, he hit a patient 112.

By the time Burn retired, he had more than 12,000 runs under his belt in club cricket. Only Ronald Morrisby has gone past him with some phenomenal feats of run-scoring in the 1950s. He also captured 362 wickets in his career.

Painstakingly slow and sedate in his batting, Burns was a popular figure in his day and was given the nickname ‘Scotsman’. And he had yet another record up his sleeve.

Even though chosen as a mistake, he was the oldest living Test cricketer in 1957 before he passed away at the age of 92. 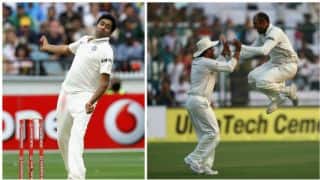