Karthik Parimal profiles Kepler Wessels on his 55th birthday. Wessels is the only man in Test history to score over 1,000 runs for two different countries. 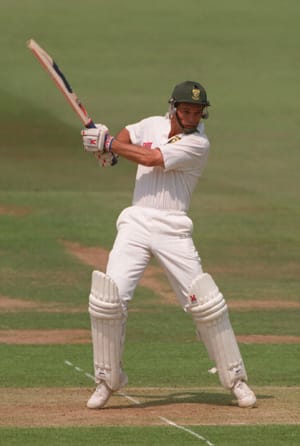 Karthik Parimal profiles Kepler Wessels on his 55th birthday. Wessels is the only man in Test history to score over 1,000 runs for two different countries.

Very few can boast of representing two nations in Test and One-Day International (ODI) cricket, leave alone scoring centuries for them. But Kepler Wessels, born in Bloemfontein in 1957, managed to tread his way into that unique list, having represented Australia for almost three years before moving base to his native South Africa in 1992, after the country was reinstated into cricket by the International Cricket Council (ICC) after the ban for apartheid practices was lifted.

Wessels scored centuries on debut for both Australia and South Africa – and against the same opposition, England. He scored 162 and 104 respectively.

Dexterity in other sports

Although Wessels took to cricket at an early age, he was adept in other sports, primarily rugby and tennis. He was a fierce competitor in the game of tennis, having scaled several peaks at a very young age. However, he failed to replicate match-winning performances at the senior level and later went on to make cricket his focal point. Thereafter, he thrived in the sport and soon became one of the most sought-after players. He played his first First-class match at the tender age of 16.

Commencement of career with Australia

Wessels was drafted by Kerry Packer to represent Australia in World Series Cricket. This team was not recognised by the Australian Cricket Board, but it featured a star-studded line-up. During the course of the series, Wessels put up quite a few impressive performances and once the tournament came to complete standstill, he stayed back in Australia and began his career with Queensland. Soon, he made his debut for Australia against a formidable English side at Brisbane. Having opened the innings, Wessels scripted a magnificent 162 in Australia’s total of 341. He managed a decent 46 in the second innings of that same Test which the home side went on to win comfortably by seven wickets.

Wessels’s ODI debut, against New Zealand, was a dramatic one too. He was involved in a match-winning partnership of 154 with John Dyson, contributing 79.

When Wessels donned the South African jersey, he became the first man to have played ODI cricket for two countries. His stint with his national side saw plenty of ups and downs. While he scored another poetic ton in his first Test for South Africa against England, there was a lot of debate on his inclusion in the ODI squad. He played 16 Tests and 55 ODIs for his country, having scored 1027 and 1627 runs respectively.

The ‘Mankading’ issue recently came to light, thanks to Ravichandran Ashwin and Murali Kartik. While it still remains a matter of debate whether such a method of dismissal is against the spirit of cricket or not, what Wessels did to Kapil Dev back then, after the latter ‘Mankaded’ Peter Kirsten, didn’t go down well with the Indians. When play carried on after Kirsten was sent back to the pavilion, Kapil alleged that Wessels hit him with the bat on his shin as the latter turned to go for a second run. However, match referee Clive Lloyd dismissed the complaints filed by the Indian players due to lack of evidence.

Steve Waugh narrates another interesting incident which occurred during a Sheffield Shield game between New South Wales and Queensland in his autobiography. “Three incidents from the match are etched in my personal archives. One is the sight of Kepler Wessels shoulder-charging Peter Clifford on the pitch as the players moved between overs. It was a good solid hit and it took me by surprise. I was only a couple of metres away. It was a rare moment where aggressive talk led to physical contact. If it happened today, someone would be handed a lengthy holiday,” Waugh wrote.

Captaincy and the criticism that tagged along

Wessels captained the South African side after it was reinstated by the ICC. He led during the 1992 World Cup and for two more years thereafter. However, he drew heavy flak for his negative tactics and a conservative approach. Waugh, in his book, also describes in a small paragraph Wessels’s captaincy and how it had an impact on the future South African teams.

He described Allan Border’s final Test in Durban as a waste of five days of time and slammed the two teams for lacking intensity. “It must be said that South Africa’s captain, Kepler Wessels, was the prime culprit, allowing his side to meander through 205.2 overs to accumulate 422 runs in their first innings and essentially kill off the match. It was an attitude that was to cripple South African cricket for the next 10 years. They were a well-drilled, highly skilled but regimented team, who lacked flexibility and the flair for improvisation needed to take them to the next level,” Waugh opined.

Ian Botham, who is not known to mince words, too spoke critically of Wessels’s captaincy in his book Head On. After the South Africans lost that infamous World Cup fixture in 1992 against England owing to the tournament’s ridiculous rain rules, Botham states that he didn’t like to win in such a manner, but the scenario could have been seen as payback for Wessels’s negative tactics.

(Karthik Parimal, a Correspondent with CricketCountry, is a cricket aficionado and a worshipper of the game. He idolises Steve Waugh and can give up anything, absolutely anything, just to watch a Kumar Sangakkara cover drive. He can be followed on Twitter at  https://twitter.com/karthik_parimal)