Kevin Pietersen vs Andy Flower: A ticking time bomb which was set to explode on a sinking ship

Kevin Pietersen vs Andy Flower: A ticking time bomb which was set to explode on a sinking ship

Kevin Pietersen continues to divide opinions in English cricket. While his brilliance with the willow can dazzle the spectators and leave them spellbound, his exuberant persona has often seen him confront authority. And, in the aftermath of England’s ignominious 0-5 drubbing in the Ashes Down Under, Pietersen possibly finds him in the centre of another storm, coach Andy Flower being the other party on this occasion. If reports are to be believed, Flower has made it clear that he won’t continue as coach if the flamboyant right-hander continues to be a part of the England side. Are the cracks visible for all to see?

In the past, Pietersen had had a few big brushes with authority. When he was at the helm in 2009, a huge rift with coach Peter Moores saw him lose his captaincy. Pietersen made it clear that he couldn’t work with Moores and the dynamite blew in his face as the England and Wales Cricket Board (ECB) said that he had resigned; although Pietersen claimed he had never put in his papers. And then in 2012, he retired from One-Day Internationals (ODIs), furious at not being able to play in the Indian Premier League (IPL) as per his terms. Plus, there was that text-message controversy during the South African tour to England which saw him ousted from the Test team even after he had scored a brilliant hundred. Finally, sense prevailed on both sides and he returned to help England script a memorable series win in India.

However, with England doing well and retaining the Ashes at home in 2013, the cracks in the Pietersen’s relationship with Flower may not have manifested into something big. Perhaps it was a ticking time bomb, set to explode in a ship sinking. Many reports in the British press suggest that Flower believes he can rebuild the side, but Pietersen doesn’t fit into the cause. Yes, he is your best batsman, but is he there for the team? That is something Flower must be asking the board.

During the 2013-14 Ashes campaign, Pietersen hasn’t been his usual self. Although, he does go for his strokes and gets them right more often than not, there is that unmistakable hunger that has seen him score the big ones. This time, the Australians nipped him in the bud and didn’t allow him to convert his encouraging starts. However, Pietersen too contributed to his downfall a few times as there were occasions when he played a reckless stroke or two. His supporters may ask: What if they had come off? Would have been a different story wouldn’t it?

Nick Hoult of the Telegraph wrote in his article, “Pietersen said yesterday that he wants to help England regain the Ashes in 2015 but privately fears that he will be made a scapegoat for the 5-0 series defeat.” So, there could be a possibility that Pietersen may be shown the door. It is a brave move as he is by far England’s best batsman. And, on the Ashes tour, his performance may have been below par, but he was England’s highest run-scorer. Which means, almost everyone has failed. Then why is he singled out? Obvious answer is that it isn’t a cricketing reason that should find Pietersen out again.

For the time being, Flower has been given the vote of confidence by the English board as they have assured him that he would continue in the role. If the rift was evident, is the ECB ready to axe Pietersen? Or has Flower only voiced his apparent reservations after the appointment?

There is another fly in the ointment though. Pietersen has made his desire to play in the IPL public on a few occasions and with the auction coming up, it may have an effect on his England career. If say, he commits to an IPL side, then he may put his international career in jeopardy. Guardian reported that the new IPL contracts need a commitment of availability for three years. So, this may play a part as England’s next Test series is only after the IPL and in subsequent years, it is possible that their assignments would clash with the IPL.

England may have a few promising players in line, but it would take time to find someone to match Pietersen’s quality

From an outside view, this could be an even bigger feud than Pietersen’s previous ones. Here is one coach who enjoys the support of the board and is backed by them to chalk out a plan. On the other hand, you have a player, erratic at times in behavior and known for his own personal flourish. There has been a gradual build-up to all this. In 2009, ECB said let Moores go as they couldn’t let things get out of hand with Pietersen. But, now they have Flower, who was responsible for England’s rise. How do you weight the two options?

It looks like Pietersen’s fate may be in his own hands as clearly, he may stand alone through all this. In 2012, his alleged text-messages were said to breach team spirit and once a player supposedly commits such an indiscretion, it doesn’t bode well and is somewhere there in the unit’s distant memory. It may all come back, in a catharsis if Pietersen isn’t able to meet his needs on this front. A lot would be clear in a few weeks, particularly when the IPL auctions take place. His records etc. may not come into the equation if he doesn’t fit into the team’s general spirit and camaraderie.

At 33, Pietersen does have a few good years ahead of him and remains the match-winner. England may have a few promising players in line, but it would take time to find someone to match Pietersen’s quality. At the same time, you want a man who has been there done that; Flower resurrected them the last time and is the man for the job again. It is in the interests of English cricket that they find a common ground and move on. 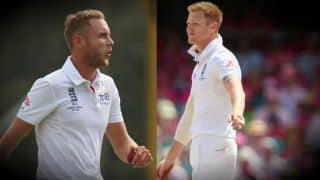 Ranji Trophy 2013-14: Maharashtra on front foot as Mumbai lose 3 wickets for 92 at lunch on Day One