There were jitters, but Pakistan overcame them with a few crucial acts for a memorable series victory.

14 days of see-saw battle culminated in Pakistan’s series victory on the final day in the decider at Pallekele. Abhishek Mukherjee observes what helped them do it.

Amidst the aftertaste of conviction in Pakistan’s memorable series win in Sri Lanka, courtesy a display of resilience reserved for the most special occasion from Younis Khan and Shan Masood, it is easy to forget signals of the team’s readiness for it before the final act. Asad Shafiq played a critical hand in reversing the momentum in the first Test in Galle, first with a patient hand during Sarfraz Ahmed’s onslaught at the other end, and later with a shepherding act with Zulfiqar Babar to allow the latter to enjoy a 60-ball 56. Shafiq, who didn’t have a prolific series otherwise, gave his side the much-needed advantage with the bat in the Test; Pakistan’s batting order had a tendency to collapse, as was seen in much of the series, and he got them out of the rut for a 1-0 lead. READ: Younis Khan becomes 7th batsman to score 150 in all four innings in Test cricket

Their bowling remained effective throughout. Till the leader of the pace attack Wahab Riaz was available, he tested the opposition batsmen with pace and bounce, and took crucial wickets. Yasir Shah made up for Wahab’s absence due to a hairline fracture with persistent and persuasive leg-spin bowling. His six-for in the second Test in Colombo against batsmen cautious to avoid downfall against him following the meek surrender in Galle and without Wahab’s softening up of them displayed his pedigree. Pakistan have bowled them out for a middling score in five of the six completed innings in the series: 300, 206, 315, 278 and 313.

Their creditable turnaround from 96 for 5 in Galle notwithstanding, their batsmen kept making it difficult for them to stay in the contest, with invariable batting collapses. Their closure for 138 in the first innings, and not Wahab’s absence, cost them the Colombo Test. Their batting kept the hosts favourites for three-fourths of the decider in Pallekele, which made their final-day announcement of strength astounding, and kept up their reputation as unpredictable, even in the Misbah-ul-Haq era. READ: Younis Khan — most prolific Pakistan batsman after 100 Test matches

Staring at a big defeat after being placed at a precarious 31 for 2 after 15 overs, Younis shed off his shakiness in his previous game — his 100th — and combined with an inexperienced Masood, to reverse the tide. This performance, and the one led by Shafiq, were two batting anomalies that helped them clinch the series. En route to the remarkable chase, the highest successful one from Pakistan by a distance, Younis scored his fifth fourth-innings century, the most by any batsman. So sure was the performance that it was marked by a calm in its conclusion that was palpable, prompting a scribe to write an article on it.

If this rearguard hadn’t happened — it didn’t look likely to — Sri Lanka would have been beneficiaries of their own persistence. In all of their batting outings, there would at least be one top-order batsman — Dimuth Karunaratne (the highest run-getter from either side in the series), Kaushal Silva, or Angelo Mathews — who would stand tall against testing Pakistan bowling and get a big one.

Dhammika Prasad bowled with control and aggression to end up as the second-highest wicket-taker of the series (14) with the joint-best strike-rate (46). When Pakistan were looking to make amends on their mediocre 138 with a patient effort from Azhar Ali in the second innings in Colombo, Prasad disallowed them to optimise their comfortable position of 274 for 4 and made crucial breakthroughs to significantly contribute to bowling them out for 329. The five wickets taken by Tharindu Kaushal that facilitated the first innings collapse for 138 were also important in the win. READ: Younis Khan, Shan Masood create history

But Rangana Herath, the spin leader, serving as their perennial strike-bowler for some time, did not have an impact. He was nullified with attack of authority. The gingerly pivot at the point of delivery, due to a soft knee, could have played a part in the reduction of his effectiveness. Whatever it was, it had Pakistan getting a big thorn out of their way, as seen in his stats of 2 for 218 from 68.2 overs in three innings of bowling. Pakistan capitalised on it, just about managing to get their batting right crucially at the death to clinch the series.

There were other small but meaningful contributions to this result. Imran Khan’s five wickets in the second innings and Rahat Ali’s three in the first, at Pallekele; Babar’s half-century and 3 for 64 in the first innings in Galle; and Sarfraz Ahmed’s match-turning 96 and 78 in his team’s two wins, helped.

But the entire endeavour was rounded off by Younis’ 171. He broke records with the knock of a champion that once again proved his knack of choosing the most special moments to announce his quality. He couldn’t celebrate his 100th Test with much style but made up for it in resounding and career-defining fashion by helping his team celebrate a special moment in their careers. 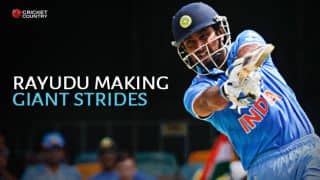