Those of us who expected the Indian cricket selectors to spring a surprise or two at the end of the November 27 selection committee meeting, especially after the team’s embarrassing 10-wicket loss to England in the second Test, have been once again left disappointed. 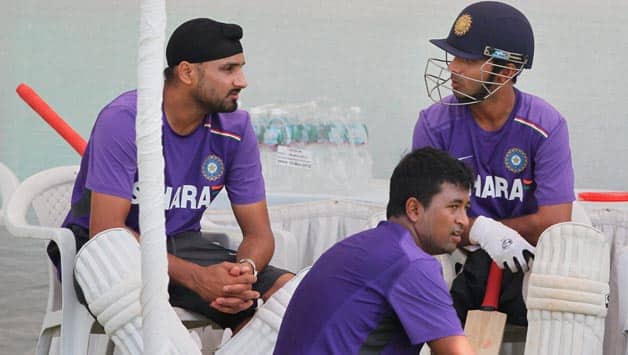 Under-bowling Harbhajan Singh (left), who was included in the team as the third specialist spinner, effectively nullified whatever advantage MS Dhoni had gained by winning the toss © PTI

Those of us who expected the Indian cricket selectors to spring a surprise or two at the end of the November 27 selection committee meeting, especially after the team’s embarrassing 10-wicket loss to England in the second Test, have been once again left disappointed.

Except for the inclusion of Ashok Dinda as a replacement for the injured quickie Umesh Yadav, the squad for the third Test remains the same, as do the questions and doubts. There are two ways of looking at it: the selectors may be lauded for not coming up with a knee-jerk reaction to the trouncing at the Wankhede Stadium in Mumbai; or they may be picked apart for not showing even a modicum of resourcefulness.

However, the question remains: If the selectors had already decided to play it safe and not make any bold decisions based on the performance of the players in the first two Test matches, what was the need for splitting up the selection process? They could have, in the first place, announced the squad for the entire Test series on November 5 itself, instead of going about it in this piecemeal fashion. Meanwhile, grapevine has it that it was India captain Mahendra Singh Dhoni who had put his foot down on possible changes at the selection meeting. Interestingly, the source adds that Dhoni was totally against dropping Harbhajan Singh, whom he had been accused of under-bowling in the second Test (Harbhajan bowled a total of 21 overs to Ravichandran Ashwin’s 42.3 overs and Pragyan Ohja’s 40 overs in the first innings of the Test). Anyway, logic, as we all know, is always at a premium at these selection committee meetings.

Now that the squad for the third Test match has been announced, it is time the team management and the players focused on the key takeaways from the first two Tests in Ahmedabad and Mumbai:

Customized pitches cut both ways: Dhoni would have hardly imagined that his demand for a rank turner would so miserably boomerang on him, as it did in the second Test. But now that he has been brought down to his knees on a spinning track by English tweakers Monty Panesar and Graeme Swann, it is time Dhoni realized that tailor-made home pitches are a double-edged sword, especially when the visiting team has players who are adept at exploiting such conditions. Instead, Dhoni and the team management would do well to focus on putting together a fighting unit that is game for any track, anywhere.

A Test is a skills test: While watching some of the Indian batsmen in action in the first two Tests, one did get the impression that too many short-version games may have robbed them of their skill to adapt to the longer version. The top order batsmen, with the exception of Cheteshwar Pujara, did not show any abiding inclination to stay at the crease and build a long innings. The spinners, with the exception of Ojha, bowled in a hurry and tried too many things as though it were an IPL game. This IPL hangover is something that should concern the team’s batting and bowling coaches.

Too many specialists spoil the game plan: Just because you have been gifted a spinning track does not mean you have to stack your bowling line-up with spinners. What variety does a Harbhajan Singh bring to a team that already has another right-arm off-break bowler in R Ashwin? If the idea was to give rest to the two main spinners, Ojha and Ashwin, between long spells, it could have been done by employing the services of part-time bowlers like Tendulkar, Sehwag and Yuvraj. Also, Ashwin and Harbhajan are contenders to the same slot (off-break bowler) in the team, something that is likely to weigh on their minds and weigh down on their bowling performance when the play together, and hence it is not a good idea to play them together in the same game.

Captaincy is not just about instincts: Of late, there does not seem to be any method in Dhoni’s madness. Some of the moves that Dhoni made in the second Test, as captain, were baffling, to say the least. His defensive and at times bizarre field placements, failure to stop the singles and twos, frequent rotation of bowlers, and under-bowling Harbhajan Singh who was included in the team as the third specialist spinner effectively nullified whatever advantage he had gained by winning the toss.

These are some of the key takeaways from the first two Tests. Focusing on them, one feels, would not only help the team in the remaining two Test matches against England but in the long run as well.