Kings XI Punjab would aim to continue playing their refreshing brand of cricket.

The George Bailey-led Kings XI Punjab (KXIP) will be one of the toughest side to beat in Champions League T20 (CLT20) 2014. Being the runners-up in the Indian Premier League (IPL) 2014, KXIP have the necessary firepower in their ranks to go all the way in this tournament. Devarchit Varma previews the team.

Captain: George Bailey, who recently relinquished the T20 captaincy of the Australian side in order to boost his chances in the longer formats, will continue to lead KXIP. He has had an excellent run with the Punjab franchise and he remains the ideal man to lead the side. Bailey was impressive with the way he marshalled his troops in the IPL 2014, and KXIP will be hoping that the side continue to perform to their potential under the leadership of Bailey.

Key Indian players: KXIP boasts of a strong Indian contingent in their ranks. The presence of seasoned campaigners such as Virender Sehwag, Lakshmipathy Balaji and Wriddhiman Saha gives the side experience. Then there are youngsters such as Akshar Patel and Mandeep Singh who have shown a lot of promise. The distinguishing factor between KXIP and the other franchises is that they have both — seasoned and young Indian cricketers — which gives them a freedom of playing as much as they want to with their playing elevens.

Sehwag showed glimpse of form a couple of months ago in the IPL when he slammed a century, and it will be interesting to see how the senior Indian cricketers turn up in the CLT20 2014. Akshar was very impressive with the ball, troubling the batsmen with his spin bowling and the accuracy that he showed in the IPL 2014. His ability to not let the batsmen score freely makes him a compulsory selection.

Key foreign players:  KXIP is arguably one of the strongest sides when it comes to evaluating their strength based on the foreign players in the ranks. The presence of Mitchell Johnson, Bailey, Glenn Maxwell and David Miller indicates that KXIP can be named as one of the strongest T20 sides across the world, and this is what makes them one of the red hot favourites in the tournament.  Johnson is the leader of the pace attack and he can terrorise the batsmen with the pace and bounce that he can generate.

Strengths: With such firepower in their ranks, KXIP is one of the sides to be wary of in the tournament. They can chase down huge targets as well as set them when batting first. They had a near-perfect season in IPL 2014, and the squad will find itself more settled and comfortable under the leadership of Bailey and coach Sanjay Bangar. There are not many areas where they need to worry, as KXIP seem to have covered up all bases with their smart buys in the IPL 2014 auction and the good results that followed.

Weaknesses: The only blip that KXIP had in IPL 2014 after having a new squad was the defeat in the final of the tournament against Kolkata Knight Riders (KKR). They enjoyed a successful run and the kind of players that they have in the ranks give them the freedom to match their opponents in all levels. However, like all other IPL sides, the Indian players haven’t played much cricket of late (with the Indian domestic season yet to begin) and it will be a worry. KXIP will find it tough to get the blokes going at the same intensity which the other foreign recruits such as Bailey, Johnson, Miller and Maxwell are at.

Past record: This is the first time KXIP will be playing CLT20. For seasons at a stretch they remained in the bottom in the IPL’s pool, but their fortunes turned around in 2014 with them making smart moves in the auction and the players coming well in the IPL 7. KXIP will not be burdened with the pressure of replicating any past CLT20 performance, and they will draw inspiration from their performance a couple of months ago. 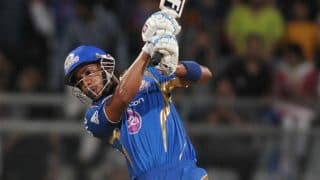