Kings XI Punjab (KXIP) did not disappoint the critics this time as well. They continued their bad run, failed to gain momentum throughout the series, and finished IPL 2016 at the bottom of the points table with a miserable Net Run Rate (NRR). The team was led by two captains this year. David Miller was the captain in the initial stages of IPL 9, and for unexplained reasons after both Miller and his team failed to fire; Murali Vijay came in as the skipper for thr remainder of IPL 2016. But this change did not work as the franchisee owners expected it to be. They started off with a loss and ended the campaign losing to Rising Pune Supergiants (RPS) in their last match. They have been performing consistently — albeit in the negative way — ending up at the bottom of IPL Points Tables for two years now. Nothing seemed to be working for them as their star players failed to live up to their potential. Here is the report card for all the players who contributed to the losses of Kings XI Punjab: ALSO READ: IPL 2016: Faltering Kings XI Punjab (KXIP) stoop to new lows

Murali Vijay (7 out of 10): The current skipper of Kings XI Punjab is the top-scorer for the side. He scored 453 runs in IPL 9, leading the side from the front. He scored five fifties in IPL 2016 at 34.54. He did not get enough support from his players in the middle. On the captaincy front, he did not have any luck, and was let down by his players quite often than not.

David Miller (3 out of 10): The South African batsman had a forgettable IPL season this time around. He failed miserably with the bat, and his highest score remained 31. An average of 16.10 explains a lot about the poor form of the player this year.Miller did not miss a single match but managed only 161 runs. He failed miserably as captain as well.

Kyle Abbott (4 out of 10): He had a reputation of being an effective bowler at death, using the yorkers well. However, Abbott was able to take only 2 wickets in 5 matches he played, leaking runs at an economy rate of 11.06. He was not a regular member of the team in the tournament but the statistics explain why he was not. The only highlight was getting AB de Villiers out for a duck and apologising to him afterwards.

Anureet Singh (6 out of 10): Anureet Singh is somehow an underrated player. He was included in the side for only two instances. He did not pick up any wickets but was able to slow down the flow of runs at an economy rate of 7.16. It was unfair to not include him in the side as he picked up 15 wickets in the last season.

Farhaan Behardien (2.5 out of 10): Behardien too had a forgettable IPL. Though, he did not get many chances but failed to impress the selectors in his quota of 3 matches. He was able to score just 14 runs.

KC Kariappa (4 out of 10): He only had one good bowling performance under his belt this tournament taking 2 for 16. Following that, it was yet another Kings XI Punjab player disappointing his fans. He took only 3 wickets in 5 matches, leaking runs at crucial stages of the game.

Rishi Dhawan (5.5 out of 10): Dhawan too did not get many chances in the tournament. He played only 2 matches and performed decently picking up 2 wickets and not giving away too many runs.

Gurkeerat Singh Mann (4.5 out of 10): Apart from one fifty, there was not much he did in his quota of 7 matches. He needed to deliver in the middle order but ended up sharing the same fate as every other Kings Xi Punjab player.

Mitchell Johnson (4 out of 10): Post-retirement life does not seem to be agreeing with the former Australian speedster. He was able to take 2 wickets in the 3 matches at not so impressive economy rate of 9.63. He was supposed to be Punjab’s fast bowling spearhead, instead he became a weak link in the side.

Shaun Marsh (5.5 out of 10): This Australian batsman was a sensation in inaugural season of IPL. He did not do anything extraordinary this time but performed at an average of 31.80, which is more than many in the side. He scored a fifty but his stay in the tournament was shortened by an injury. Kings XI Punjab surely felt his absence in the tournament.

Glenn Maxwell (4.5 out of 10): This destructive batsman seems to be going through a rough patch. He managed to score only one match-winning knock of 68 while chasing. Otherwise his performance was below par with both bat and ball. He remained wicket-less in the tournament and scored a total of 179 runs in 11 matches. He was eventually ruled out of IPL due to injury, which did not seem to affect Kings XI Punjab’s chances.

Nikhil Naik (4 out of 10): This was the youngster’s debut season and he was far from impressing the selectors to give him any more chances in the side. He scored at a less than run a ball which is not acceptable in a T20 match.

Akshar Patel (6 out of 10): The spinner emerged as a late bloomer in the tournament with both bat and ball. He picked up the one and only hat-trick of IPL 9. He managed to take 13 wickets in IPL 9 and performed with the bat given a chance. His cameos were helpful in winning a couple of matches. He was slammed for 23 runs in the last over by MS Dhoni in the game versus RPS, losing the last match of the tournament and finishing last on the IPL Points table.

Wriddhiman Saha (6.5 out of 10): The wicketkeeper-batsman for Kings XI Punjab scored two fifties in this IPL. He did not have much support in the middle. Saha did not perform to his full potential like he did in 2014, but he was better than many in the team.

Pradeep Sahu (5.5 out of 10): Pradeep Sahu, another leg-spinner in the tournament had a single performance under his belt. He took 2 wickets for 18, and managed to take 3 wickets in his debut season.

Sandeep Sharma (8 out of 10): Sandeep Sharma was one of the bowler for Kings XI Punjab who performed at a consistent rate. He picked up 15 wickets in the tournament at an impressive run-rate of 7.32. He has continued this form for the past three seasons now.

Mohit Sharma (7 out of 10): Mohit was again seen deceiving the batsman with his frequent change of pace. He justified his tag as a strike bowler and took 13 wickets in the tournament. There were a few bad performances but won a few matches with his death bowling.

Marcus Stoinis (7 out of 10): The Australian all-rounder was a surprise package this season, providing depth to both bowling and batting department. He picked up 8 wickets and scored 146 runs in 7 matches which included a half-century. His stay in the IPL was short-lived due to a hamstring injury.

Swapnil Singh (3 out of 10): It might be harsh to judge a player for a single performance but he failed to deliver when he needed to. He remained not out without playing a ball and leaked 29 runs in 3 overs.

Manan Vohra (5 out of 10): The opener had a good reputation going in the tournament. He played 7 matches and managed to score a single half-century. He failed to convert starts into big scores and leaving the field in a hurry. He scored 161 runs in the tournament.

Hashim Amla (6.5 out of 10): Amla was called into side midway through IPL. He was not picked by any team in IPL auction. He became a victim of run out in the first match. There was too much pressure on him due to Kings XI Punjab’s position in the IPL Points table. He played a splendid innings of 96 against Sunrisers Hyderabad. The knock went in vain as the team headed towards a loss. He would have been more effective if he was included in the side at the starting of the tournament.

There were only two players who did not get any chance to play this season. Debutant Armaan Jaffer, nephew of Wasim Jaffer and Shardul Thakur who has played only one match in the previous edition of IPL, he had been picked in India’s tour of Zimbabwe. 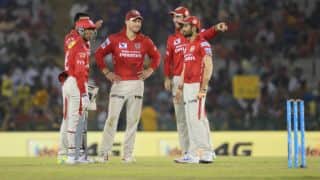