Amit Banerjee takes a look at the eleven players that Barbados might field for the match on Saturday.

The Barbados Tridents will be the team to arrive at Mohali in a more cautious state of mind, given how they would be anticipating the rise in momentum that the Kings XI Punjab are currently going through after their win in the second encounter of the group stage. Amit Banerjee takes a look at the eleven players that Barbados might field for the match on Saturday.

Mohali will witness a clash between the Kings XI Punjab (KXIP) and the Barbados Tridents, runners-up and winners of their respective domestic tournaments. While KXIP are buoyant after a five-wicket win over the Hobart Hurricanes in the second group game which saw the hosts recover from early blows courtesy some fine hitting from Glenn Maxwell.

Barbados on the other hand would walk in to the ground with a more cautious approach and would also look to start their campaign on a positive note with a win. Following are the players that are likely to represent the visiting team:

Top-Order: The absence of Dwayne Smith means that Jonathan Carter might open the Barbadian batting along with William Perkins, who had opened during the recently concluded Caribbean Premier League. Jason Holder would fill in the position at number three, while the experienced South African batsman Neil McKenzie would walk in upon the next dismissal.

Tail-enders: Spinners Jeevan Mendis and Ashley Nurse would come in at number eight and nine respectively. James Franklin is expected to provide support to the tail-enders given his impressive batting abilities as well as make early inroads into the opposition. Ravi Rampaul would be expected to continue his good run with the ball. 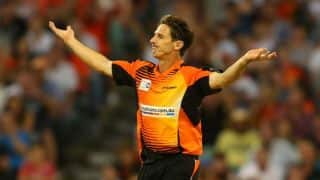