It's a must-win match for Cape Cobras to stay alive in the semi-final race.

Kings XI Punjab (KXIP) are on top of Group B of the ongoing Champions League Twenty20 (CLT20) 2014. On the other hand, the Cape Cobras are struggling at the moment, and the match against KXIP may well be their last one of the tournament if they fail to win. Amit Banerjee takes a look at some of the interesting contests that one can expect during the high-octane clash.

Kings XI Punjab have proved themselves one of the most dominant sides in CLT20 2014 with a thumping 120-run win against the Northern Knights in their previous encounter at Mohali. They are one of the strong favourites to the win the CLT20 title this year, after finishing as runners-up in the Indian Premier League (IPL) 2014. The Cape Cobras, on the other hand, have barely managed to keep themselves afloat in the tournament so far. A win in the super over against the Barbados Tridents have kept them breathing as of now. Following are some of the interesting contests that could be dished out to the fan when these two sides meet in the 17th match of the tournament at KXIP’s homeground of Mohali.

Virender Sehwag vs Vernon Philander: Both Sehwag and Philander are known to bite into their opponents right from the start, and it will be interesting to see who gets the better of whom. Sehwag is in prime form at the moment, having smashed a 37-ball 52 against Northern Knights in the previous game. Philander has been displaying all-round abilities in the tournament so far, though his ability to take early wickets is yet to be fully seen.

David Miller vs Sybrand Engelbrecht: Miller’s 18-ball 40 blew away what was left of the Knights’ bowling attack in the 13th match after the fireworks displayed by Sehwag and Manan Vohra. Engelbrecht has proven himself an able spinner in the two matches that he has played so far, taking five wickets for 44 runs from those appearances. Miller is also known for handling all forms of spin and will thus make for an interesting battle between the two.

Glenn Maxwell vs Charl Langeveldt: Maxwell has been going through a lean patch in the tournament with only the first game against Hobart Hurricanes being a positive memory for the Australian. His reputation as an explosive batsman remains intact though, and that will be on the minds of the Cobras during Sunday’s encounter. Langeveldt has been effective in getting the breakthroughs for the Cobras, and has shown the potential to stop the flow of runs in the middle overs.

Hashim Amla vs Karanveer Singh: The Cape Cobras skipper top-scored for his side with a gritty knock of 59 from 42 balls in an innings that defied a bowling attack including a certain Jeevan Mendis who was creating havoc with his leg-spin that was rich in depth. Amla is regarded as one of the best batsmen in the world at the moment, as well as one of the better players of spin. It will be a treat to watch him face Karanveer Singh, who destroyed the Northern Knights batting lineup with figures of four for 15.

Richard Levi vs Parvinder Awana: Levi has been going through a purple patch off late, and will be expected to go for the offensive against the KXIP bowlers in order to get the South African outfit off to a good start in what could possibly be their last match of the 2014 edition of the CLT20. And that is something that the KXIP spearhead Awana will keep in mind when he gets ready to bowl during that match. 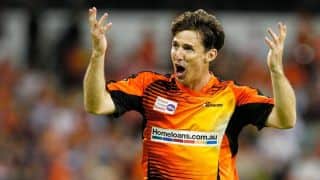