This was Sunrisers Hyderabad eighth win out of 10 matches against Kings XI Punjab, proving their supremacy once again.

Sunrisers Hyderabad (SRH) walloped Kings XI Punjab (KXIP) in their own den in match 33 of Indian Premier League (IPL) 2017. This was Sunrisers eighth win out of 10 matches against Kings XI, proving their supremacy once again. This win also kept them at No. 3 in IPL 2017 points table, while Kings XI stutter at No. 6. Rashid Khan was named Man of the Match for keeping the home team at bay just when they were going full throttle. Credit also goes to David Warner, Shikhar Dhawan, and Kane Williamson for scoring a half-century each. Let us have a look at the top highlights. Full Cricket Scorecard, Kings XI Punjab vs Sunrisers Hyderabad, IPL 2017, Match 33

David Warner attains new high: Despite playing a season lesser than the other highest scorers, Warner now has most half-centuries (35) to his name, surpassing Kolkata Knight Riders Gautam Gambhir.

Williamson squashes critics: Unlike his counterpart Virat Kohli, Williamson was never considered a limiter-overs specialist. However, his outstanding 89 against Delhi Daredevils included more sixes than fours. In match 33, he emulated that effort. He remained unbeaten on 54 off 27, taking the Sunrisers to a colossal target.

The Gabbar show: Dhawan top-scored for the Sunrises, swatting 77 off 48. His remarkable innings comprised of 9 fours and a six. This was his second half-century of this edition.

The David Dhawan spectacle: Warner and Dhawan added 107 runs for the first wicket. This was their fifth 100-plus stand.

Maxwell rolls his arm: Amidst the carnage, Maxwell was the only sigh of relief of Kings XI. He took two wickets of Warner and Yuvraj, conceding only 28 runs.

Kings reduced to nothingness: Five of six bowlers from the Kings castle conceded over 10 an over, with only one of them taking a wicket.

Marsh comes to the rescue but falls at the last hurdle: Shaun Marsh, the most experienced player for KXIP, rose to the occasion once again. He hammered 85 off 50 with the help 14 fours and 2 sixes. All the same, his efforts went in vain. None of the other batsmen partnered him till the end, thus falling short of the target.

Bhuvi continues being Bhuvi: Bhuvneshwar Kumar seems to have continued his form of 2016 in this edition. He had finished the tournament as the highest wicket-taker and is now at the top as well. In today s contest, he got the better of two big fish: Martin Guptill and Marsh.

Another day at work for Rashid: Rashid took an all-important wicket of Eoin Morgan. In addition, he gave a solitary boundary, that too off the last ball off his spell. 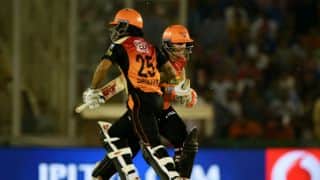